Mike Leach: Camp to be highlighted by competition

This isn't exactly news, but since coach didn't say much that was newsworthy today, we'll go with it.

Share All sharing options for: Mike Leach: Camp to be highlighted by competition

WSU coach Mike Leach held his annual pre-fall camp teleconference with reporters today in advance of the opening of camp tomorrow, and while what he had to say wasn't all that informative, there were a couple of nuggets and decent quotes embedded in the 30-minute session.

Since professional reporting on these sorts of things demands that I construct a narrative, the topic of competition came up a few times. This, of course, is not something earth-shattering as it relates to Leach ... but like I said, I need a unifying element, so here we go.

Leach noted that while Connor Halliday has the upper hand at the moment as it relates to the quarterback position, he and Austin Apodaca will split the repetitions at the outset of camp. Then, as one guy starts to separate himself, they adjust the reps toward that player accordingly.

As he did at ESPN and Pac-12 media day last week, Leach once again praised Halliday's work ethic and development. But he also offered up a little bit about what has allowed Halliday to have the advantage out of spring, and what will hopefully make Halliday a more effective quarterback this fall. 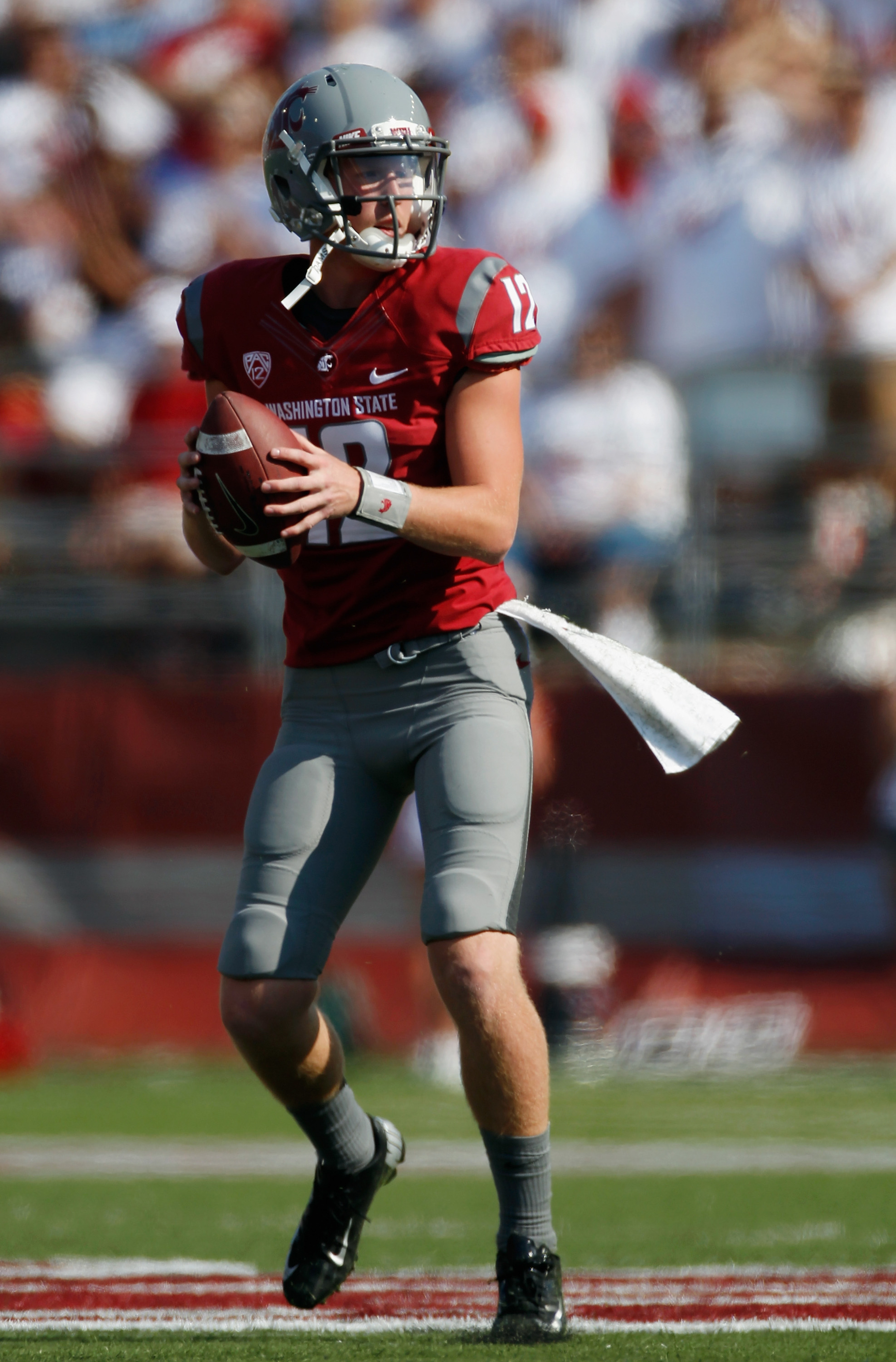 Who's going to be in Lewiston? And how big have they gotten? We've got you covered. You can also check out the depth chart here.

Translation: He's getting better at finding the open guys all over the field rather than trying to wedge the ball into small windows downfield.

One intrepid reporter asked Leach to identify a few of the key position battles we can keep an eye on.

"I mean because even if you're not battling specifically, every one of them are battling to be starters, first of all, that's just a fact. Then within that you're battling how many reps you get.

"I get asked that (question) some and it is kind of a befuddling question to me. Some of this started last year, you know, on this whole ... positions are sewed up, we're not going to be competitive because we don't want to hurt some guy's feelings by benching his ass and letting somebody else play."

The topic of wide receiver Vince Mayle's size came up, as it did on our own roster examination. Leach said last time they measured, the 6-foot-3 Mayle was 238 pounds with 13 percent body fat. That latter number might seem a bit on the high-ish side for a wide receiver, but Leach said he didn't see any reason Mayle needed to lose weight: "Nah, as long as he's fast and as long as he moves well. He's always been big."

A little known fact about Mayle is that he's technically a senior and listed as such on the fall roster. He played basketball at a community college before taking a year off to get his academics in order and then playing his first year of football since high school last year. The assumption when he signed was that he had two to play two, but he's going to need a waiver from the NCAA to make that happen. Leach said they expect to have an answer on that sometime during the season.

Most of Leach's answers were fairly mundane, but talking about the construction of the football operations building got him excited.

"Right now, we're spread out over four floors," he said of the setup at Bohler Gym. "To see somebody, you have to make an appointment or be incredibly lucky to see them in the hall. (In the new building) everyone will be around each other and see each other and develop a lot of camaraderie. Bumping into each other in the hall is really big. I've always known it was big, but now being scattered over four floors I really know."

Leach emphasized the informal talks he can have as a head coach with players during these times, and how important it is for getting to know players and motivating them. He also noted some of the amenities that will be available to players in the new locker room -- including a barber chair (yep) and the requisite televisions and video games -- and said it'll be a place players want to stay and hang out and get to know each other.

He didn't have much to say about camp being in Lewiston, but when asked how the players felt about potentially being taken out of their comfort zones, Leach said, "I didn't ask them. Comfort zone's not exactly the priority around here. The overall reaction is most guys seem pretty excited about it."

You probably didn't notice that WSU is starting camp before the rest of the Pac-12. I certainly didn't. But someone did and asked Leach about it, which gave him the opening he was looking for to be typically obtuse.

"Somewhere in Fort Knox, they have the secret to all this. It's one of the most befuddling things in the world. There's some kind of formula based on when school starts and how many hangnails your great grandfather had and how many hangnails your great grandmother had, they put it into a computer and it tells you when to start. There was a time when you just knew when it started, but now it's gotten so darned complicated, you wait for the conference to tell you and then off you go."