WSU vs. Auburn: Who exactly is traveling to Alabama to start the season?

Maybe WSU can use the element of surprise on August 31?

Share All sharing options for: WSU vs. Auburn: Who exactly is traveling to Alabama to start the season?

The Washington State Cougars head deep into the South to open the season against Auburn on August 31, but it appears the home team is confused as to what team will be showing up on the field. Auburn's ticket office appears to have sent out an e-mail advertising a "True Blue Pack" which includes WSU's visit to Jordan-Hare Stadium.

Auburn should consider renaming it the "Inaccurate Blue Pack." Some fans who buy that four-pack of tickets may be surprised when a team in purple doesn't show up. But silly them for being fooled by this official e-mail from Auburn: 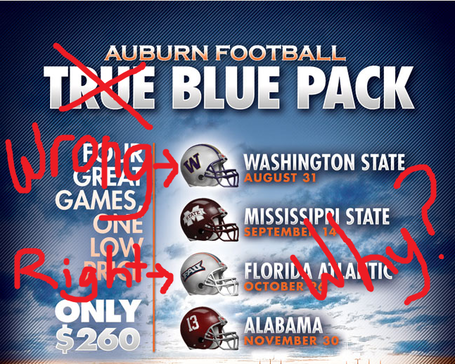 :There's one thing that really hurts in this picture: The graphics design person in the Auburn athletics department could not distinguish Washington State from Washington, but was able to nail the Florida Atlantic helmet without confusing it with Florida International. Come on man (or woman), even ESPN used to combine the two schools for its "Bottom 10" column.

But hey, at least Auburn has the name right. Right?

Of course, WSU should be used to this by now. Announcers routinely refer to the Cougars as "Washington" during telecasts. And who could forget when Tony Bennett was awarded national coach of the year and appeared on CBS during the Final Four?

Many Coug fans were excited to see a representative of their school on the national broadcast, but instead CBS put a little purple "W" next to Bennett's name. I thought the Cougar head was supposed to be the most recognizable logo in college sports (source: Bill Moos)?

Anyway, at least we can all just War Tide, or is it Roll Eagle?