Auburn is hoping new head coach Gus Malzahn can work a little magic with its offense in his first year.

Share All sharing options for: WSU vs. Auburn football preview: Tre Mason and the Tigers offense

The Washington State Cougars travel to Auburn to kick off the 2013 season on Saturday, where they will face an offense in transition. WSU knows all too well what it's like for a team adjusting to a different system---and Auburn has a new quarterback to boot.

Auburn's situation isn't exactly the same as Washington State's was in 2012. The Tigers are just one year removed from Gus Malzahn's--their new head coach--stint as offensive coordinator. During that time, Malzahn built a reputation as an offensive guru.

Malzahn has four previous seasons in charge of an offense--his three as OC at Auburn and his one year as head coach at Arkansas State. He has a history of just above-average success, save for the one season where he rode Cam Newton to the best offense in college football.

Here are his F/+, FEI, and S&P+ rankings from Football Outsiders for each of his offenses (FEI is primarily a drive efficiency metric, S&P+ incorporates explosiveness and per-play success, and F/+ is a combination of the two--all are opponent-adjusted):

Outside of the one season with a once-in-a-generation quarterback, Malzahn's offenses have been good, but not spectacular. However, Auburn and Arkansas State both improved on offense in his first (or only) season, so that is something for Malzahn to hang his hat on.

Simple improvement won't cut it this year if Malzahn's is to continue his string of above-average offenses. Auburn was awful last season as it attempted to run a pro-style attack. If the Tigers repeat that performance, WSU's defense could be in for a good day.

Here are the F/+, S&P+, and FEI rankings for Auburn's offense and WSU defense from last season:

The drive efficiency metric (FEI) hated Auburn last season. That means the Tigers weren't getting anywhere near what was expected from drives at their respective starting field positions. The peripherals bear that out--Auburn scored just 14 touchdowns in 28 redzone trips and converted on 31 percent of third downs.

On the other hand, the more play-oriented metric (S&P+) was much nicer to the Tigers. Auburn was having successful plays, it just wasn't finishing drives. Those successful plays can be attributed to the running game for the most part--and Auburn does get its top rusher back in Tre Mason.

Slowing down Auburn's running attack will be crucial for WSU, especially if Auburn's passing game is still at its 2012 levels. As the chart below shows, the Tigers struggled mightily through the air while finding success on the ground. That is in direct contrast to Washington State's strengths and weaknesses (100 is average): 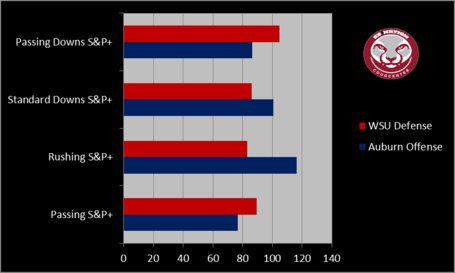 Washington State was bad against the pass last season overall, but it was average when it came to passing downs. Without Travis Long's ability to create pressure from the BUCK, that might change. If it doesn't change, WSU could capitalize on an Auburn offense that struggled to convert from long distances.

Those passing game struggles are why the Tigers have opted to start Nick Marshall over two quarterbacks with experience. Marshall is a junior--but is untested as a QB at this level. His last appearance in Division I was as a defensive back at Georgia.

Marshall's inexperience leaves him as an unknown to WSU's coaching staff, but it is likely a net positive for the Cougars. With WSU's secondary being its weak link on defense, it will be good to have an opposing quarterback who is starting for the first time in a new system.

To make things more difficult for Marshall, he won't have the luxury of veteran wide receivers. Quan Bray is Auburn's top returning pass-catcher after hauling in 14 passes for 94 yards out of the slot in 2012. Tight end C.J. Uzomah figures to get his fair share of targets after amassing 136 yards on just seven catches as a sophomore.

With so much turnover in the passing game for Auburn, WSU should expect to see a heavy dose of runs on Saturday. The Cougars struggled in that area last season--but sticking 300-pound Destiny Vaeao at BUCK appears to be an attempt to give WSU a better chance against the Tigers' ground attack.

It is unlikely that Auburn's offense picks right up where it left off the last time Malzahn roamed the Jordan-Hare sidelines. While the Tigers do have the potential to run the ball well against WSU, the passing game is still a work-in-progress.

Expect the Cougs to commit to the run early until Marshall can prove his worth. If he can't, the WSU defense stands a good chance of keeping the game within reach for its offense. If Marshall does succeed, it could be a long day for Washington State.