Auburn is getting more than an offensive overhaul in 2013--Ellis Johnson brings a strong history of success to the defense.

Share All sharing options for: WSU vs. Auburn football preview: Angelo Blackson and the Tigers defense

The Washington State offense will be facing a team in a new defensive system when it visits Auburn on Saturday, but the man in charge of that defense is far from a new face in college football. Tigers defensive coordinator Ellis Johnson has made stops all around the South--leading defenses at Clemson, Alabama, Mississippi State, and South Carolina.

Johnson spent the last year as head coach at Southern Miss. A winless season with the Golden Eagles meant a pink slip for Johnson, but he wasn't out of work long. Auburn hired the veteran coordinator less than two weeks after his dismissal from USM.

While Johnson's Division I head coaching experience was far from a success, he has been in charge of plenty of fine defenses over the years. Most recently, he helped turn South Carolina into a program that consistently finished among the top defenses in the nation.

Here are the F/+, S&P+, and FEI rankings for each of Johnson's defenses (as far as the numbers go back on Football Outsiders):

First impression from that table--no DC is a miracle worker. Johnson went from leading a top-15 defense at talent-rich South Carolina to barely making the top 100 as a head coach at Southern Miss. That being said--there is a track record of success in the SEC here.

What should be most encouraging for Auburn fans is how the defenses improved after Johnson's first season. Sometimes it is hard to quantify the impact that a coach has on a team, but it appears that Johnson does have a positive effect on defenses.

This year Auburn will be running a 4-2-5, and Brian Anderson's breakdown of the scheme is an absolute must-read for Coug fans, Auburn fans, and college football fans in general.

There is plenty of work to do for Johnson's Auburn defense to reach his past levels. The Tigers finished near the bottom in Football Outsiders' opponent-adjusted defensive metrics last season. Unfortunately for the Cougs, WSU's offense did the same:

Those numbers make this matchup look more like a pillow fight than a battle of two major-conference schools. The Cougars struggled in the first year of Mike Leach's Air Raid system, and Auburn's defense wasn't much better in the final year of Gene Chizik's tenure.

But it wasn't all bad for the Tigers--they were actually decent in defending the pass, as the chart below shows (100 is average). 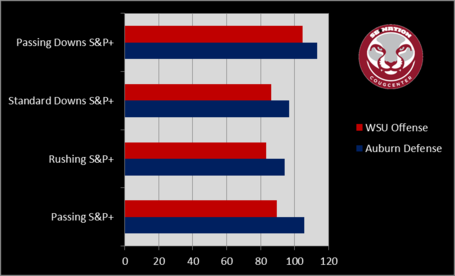 Auburn's starting secondary (according to the official depth chart from Al.com) features four players who saw significant playing time last season, and another who got some action in. Joshua Holsey is moving from corner, where he started six games as a freshman, to safety. Backing him up is former quarterback Kiehl Frazier, who moved to safety during fall camp.

With so many returners, the Tigers could very well be better in pass coverage this season. The defensive line is more of a question heading into the matchup with WSU.

Angelo Blackson is slotted to start at one of the tackle positions. The 6'4, 310 junior tied for the team lead in tackles for loss last season with 7.0 and figures to test a suspect Cougar offensive line. The good news for WSU is that Auburn's best defensive end, Dee Ford, will miss the opener due to injury.

Ford's absence will relieve some pressure on the edge, and WSU's offensive line will take any help it can get.

Overall, it's not a good sign for WSU if Auburn continues to be best against the pass. The Tigers didn't defend the run well last season, but there is no reason to think the Cougars have the ability to exploit that weakness. Those waiting for the offense to look more like Leach-led units of the past may be waiting for another week.

Coug fans can hope that new defensive scheme will mean a few missed assignments by Auburn. WSU needs to take advantage of those--in a big way--to steal a game at Jordan-Hare.