Thank you. There really are no more words. But that never stopped me before, so I'm going to try anyway.

Share All sharing options for: Team Trystian raises more than $11,000 for Make-A-Wish!

What started seven weeks ago with what I thought might be a crazy idea came to fruition on Sunday when Team Trystian participated in the annual Walk For Wishes at Marymoor Park in Redmond, Wash., after having raised more than $11,000 for the Make-A-Wish Foundation in Alaska and Washington.

That's a lot of money! And it all goes to kids in need. Too cool.

I've said it multiple times, but I never dreamed we'd be able to do what we did. What started with, "I wonder if we could raise $1,000?" ended with Trystian and I on stage at the end of the event to be recognized for raising enough to fully fund two wishes -- and then some.

Everyone clapped a lot for us, but the credit truly goes to all of you who donated to our team -- all I did was share a story and send a bunch of tweets, which really doesn't feel like much. Certainly not something I would have expected to be "worth" $11,000. It was all of you and your generosity that made it happen, which means that while this will sit on Trystian's dresser (he's quite proud of his trophy!), it really belongs to all of you -- the CougCenter and SB Nation community, friends, family, and my colleagues at Rogers High School: 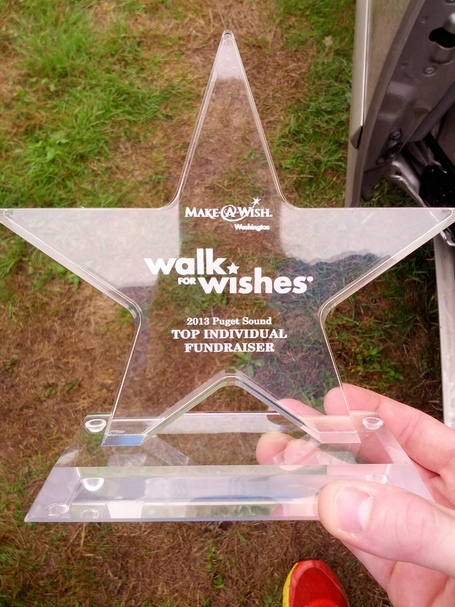 We arrived at the event to find a tent with a table and chairs set up for our team, thanks to the amount of money donated on Trystian's behalf. That came in handy, because it wasn't a real beautiful day, drizzling in the morning. Little did we know, the weather was about to get ugly.

About a half mile into the 5k walk, we heard what sounded like some thunder in the distance. A few minutes later, it started to rain. A few minutes after that, it started to pour -- you know, the HUGE raindrops that only fall when you're in a thunderstorm. We ducked for cover under a tree, which helped a little. After briefly considering turning back -- kids in strollers and all that -- we decided to press on when it looked like the rain was letting up. It didn't let up completely (as evidenced by the pictures above), but the hard stuff did pass.

Trystian still gets tired pretty quick, so he spent virtually all of the walk in a stroller. The rest of us -- minus 18-month-old Atticus -- walked the entire 3-plus-mile course. However, we were able to coax Trystian out of the stroller for the final stretch. This is what it looked like. He seemed to enjoy the cheerleaders:

After some time milling around the grounds, there were some awards, including the one given to us. I took Trystian up on stage with me, since he's the actual hero. What followed is pure gold:

Strangely, nobody believes me when I tell them how shy Trystian is.

It was a tremendous day for all involved, as Make-A-Wish raised more than $238,000 through the event. I cannot adequately describe the gratitude I have for everyone who contributed to Make-A-Wish on behalf of Team Trystian over the past seven weeks. It still blows me away, and I get a little choked up thinking about it.

Maybe we can grant three wishes next year. What do you think?

(P.S.: If you feel so inclined -- you can still give! Even with all the money raised, it still was more than $25,000 short of the event goal. Remember that every dollar given helps a sick child keep hope alive, just like in the video below. Donate here!)