Assessing the state of the WSU Seattle Game

There are passionate voices on both sides of the issue. But since the game is likely going to continue, let's talk about how it can work.

Share All sharing options for: Assessing the state of the WSU Seattle Game

There were a number of creative adjectives thrown around last night regarding attendance at the Seattle Game -- pathetic, embarrassing, pitiful. All were apt.

It was announced that just over 40,000 fans were in the stadium, but that was pretty clearly a "tickets distributed" situation; the Seattle Sounders put about 38,000 fans in there when the entire lower bowl and first handful of rows of the upper deck are completely filled, and this was far from that. I snapped this picture from the press box just before kickoff. Although it did fill in to some degree, I have a hard time imagining more than 30,000 people actually inside the stadium.

I always appreciated the Seattle Game. Since I couldn't get back to Pullman, it meant a lot that a little slice of Pullman - however artificial - came to me.

But even at 40,095, it was the lowest attended Seattle Game in its 11-game history, leading some fans to lobby loudly to kill the game altogether. A 3-1 team that has beaten USC and is playing the No. 5 team in the country can't draw any better than that? Really? When you consider that Martin Stadium is sold out for Oregon State, it's a compelling argument against moving the game away from a venue where the team would have a true homefield advantage.

For his part, athletics director Bill Moos has given no indication that discontinuing the game is even on the table. There's money to be made that's not insignificant -- I once was told by a Mike Price confidant that while he was never a fan of the game itself, in its earliest iterations, the revenue from the game basically paid his assistants' salaries for the year in that one afternoon -- and it's clear he believes that bringing this game to his largest concentration of alumni is an important part of his plan to market the program.

I'm not going to argue whether those two things are actually true. If the game isn't going away, there just isn't a lot of value in me banging my head against a wall that isn't going to move. I do that enough in my day job with apathetic teenagers. There are probably some of you who have enough clout as donors that your complaints are productive, but I'm not that guy. I don't have anybody's ear. 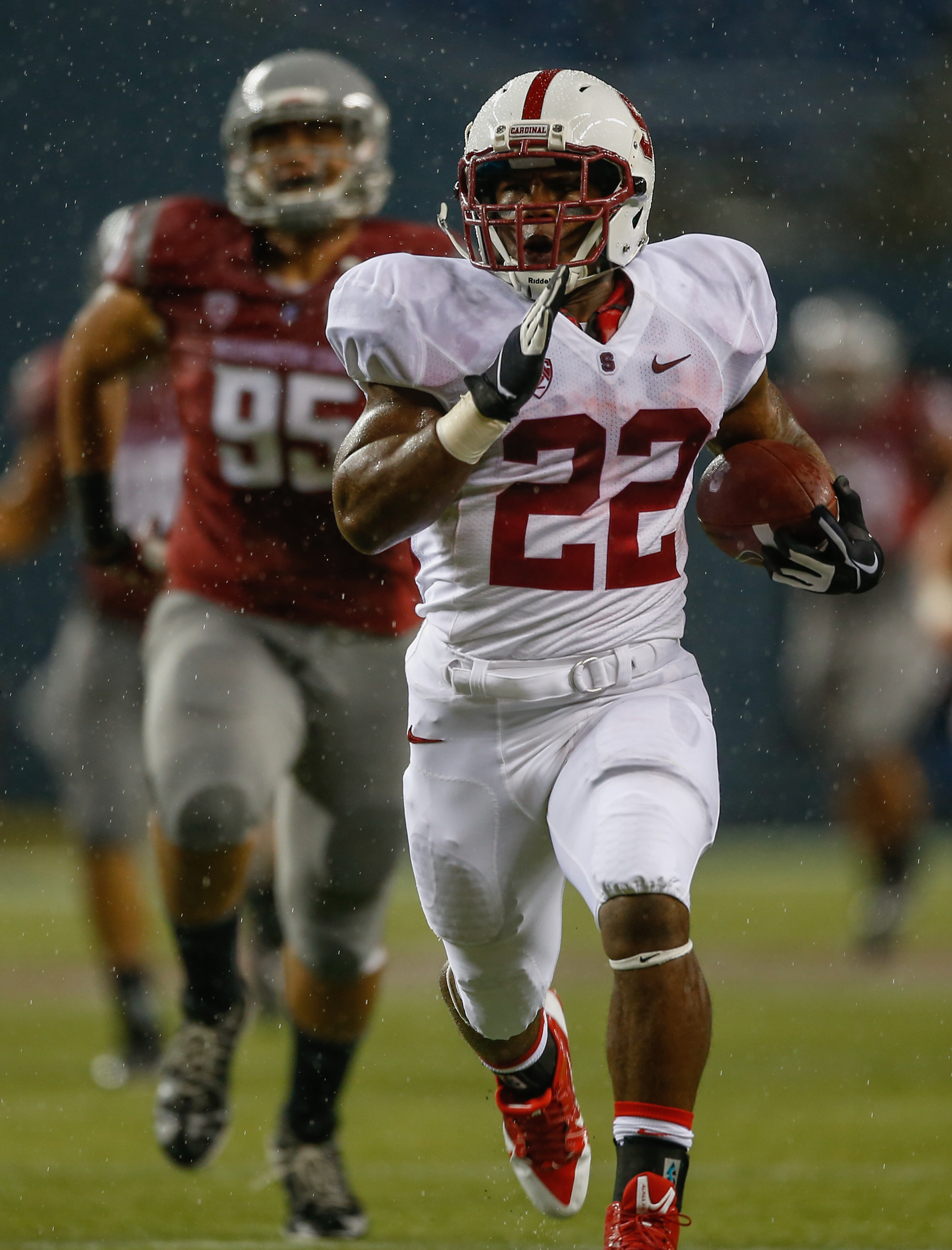 The Cougs went into the game with the No. 5 Cardinal hoping to prove they were for real. But an avalanche of turnovers and big plays buried them.

Still, if I don't have the power to prompt significant change, maybe a couple of humble suggestions can get some traction.

Being a Coug located on the west side of Washington, I've gone to most of these games over the years. Early on, I went to the game in addition to a game or two in Pullman; later, as my family grew and finances dwindled, this became my lone opportunity to see the Cougs play live.

For that, I always appreciated the Seattle Game. Since I couldn't get back to Pullman, it meant a lot that a little slice of Pullman -- however artificial -- came to me. It gave me a great excuse to get together with friends and celebrate the university I love. Would I rather watch a game at Martin Stadium? No question. Whenever I come down the hill into Pullman, I turn to my wife and smile, "Feels good to be home." But the Seattle Game is a reasonable proxy when the alternative is nothing.

I'm not going to pretend that everyone who goes to the Seattle Game as their lone Cougar football game of the year is like me, longing to get back to Pullman. I'm sure there are many who have the means to go who choose not to go back. That said, I've been to enough of these over the years that my sense is that the motivation of even those people for going to the game still is more or less the same as mine: Connect with old friends, celebrate WSU. I'd even go so far as to say that the game itself is secondary to a lot of Seattle Game fans. (That's not exactly a bold statement, given how many of these same people left home games as students at halftime to hit Shakers/The Coug/Valhalla.)

It's partially because of this that I think this year's iteration of the Seattle Game was more or less doomed to fail to live up to the kind of response Moos would like to see. If we buy into the notion that the majority of Seattle Game attendees -- known colloquially around these parts as "Joe Seattlefan" -- are casual football fans more interested in the event than the game, then the fact that the opponent was a top five team really isn't a selling point, nor is the fact that the Cougs are 3-1. I'm not going to go so far as to say they all are oblivious to the situation; I'm just saying it's not a major part of what draws Joe Seattlefan out of his living room.

And honestly, that much should have been obvious from the games the last two years, which also were night games around this time of year against conference opponents.

The game against Oregon State drew only 49,000; Oregon drew 61,000. In both instances, you could conservatively estimate there were 10,000 opposing fans in the stadium each night. Given how few Stanford fans were in attendance Saturday night, you could argue that the attendance was about the same as two years ago. As for last year's bump, I'd guess it was primarily latent excitement about the Good Ship Leach pulling into port, and there probably were more than 10,000 Ducks, too. Saturday night was really just more of the same.

Other factors working against this year's attendance? The weather certainly was one -- it was miserably rainy all week here, and if Moos is to be believed when he says they typically sell a good number of tickets the week of the game, that surely scared some people off. Although they could easily buy a ticket under one of the two monstrous roofs, remember -- Joe Seattlefan wants to hang out with his friends. A driving rainstorm doesn't make for much of a tailgate opportunity, and wet pub crawls aren't all that much fun. If Joe Seattlefan ain't committed enough to football to drive to Pullman, he probably ain't committed enough to walk/sit in the rain, either.

Additionally, as a parent, I can tell you that I had planned to take my family each of the last three years, only to change my mind when the 7 p.m. kickoff was announced. We ended up getting childcare for OSU and Oregon, but this year, I just decided to bag it and go by myself and sit in the press box. How many other families are like mine, unwilling to take small children to a game that won't end until 10:30 at night? Probably enough to matter.

So, the question becomes: What, if anything, can be done to maximize attendance at this game? We've been told the game is profitable for WSU, which means -- as this fan wisely notes -- WSU is leaving cash on the table for every seat unsold. And when 27,000 seats are unsold, that's an incredibly large amount of cash WSU is leaving on the table.

Here are some logistical ideas that should be easy to implement.

First step: Play the game in the first two weeks of the season. Weather matters. So you've got to figure out a way to play the game at a time of year when the weather is virtually guaranteed to be good. The last week of August and first couple of weeks of September are almost always nice over here. Nothing is guaranteed, but put the probability in your favor.

Second step: No more conference games. We now know that the only way conference games boost attendance is if 20 percent of the crowd is made up of opposing fans. History also tells us that it really doesn't matter too much if the opponent is ... overmatched. I'll throw out Nevada in 2002, since it was the first game and there was a novelty factor, but Idaho, Grambling State, San Diego State and Hawaii averaged about 47,500, showing that even if you put an awful opponent in there, it's not going to be any worse than what we had on Saturday. And if you can put a decent non-conference opponent in there? Colorado and Oklahoma State averaged 53,000.

Besides, if there's no substantial tangible financial benefit to having a conference game here, doesn't the department owe it to the team, on an ethical level, to not have a quasi-home game potentially impacting the conference race, assuming we end up challenging for those things again?

Third step: Don't play the game at 7 p.m. OK, I know WSU has no actual control over this, since it's all determined by television. But the process for "drafting" games by the networks isn't a secret, and there must be a way to set up the date/opponent so that it's less likely to get picked for a 7 p.m. game. Maybe not. But if there is anything to be done ... do it.

I'm sure there are more things that can be done beyond simple logistics. Next year's plan of playing Rutgers on the Thursday or Friday before Labor Day is a good start, and it will give us another data point. Do night games matter? We'll find out.

What other ideas do you have for making this game something that everyone can live with?