Get an up-close look at the Washington Huskies from the fans who know them best.

You probably already know quite a bit about the Washington Huskies. Or maybe you don't -- maybe you actually don't want to know anything about that disgusting team in advance of the Apple Cup.

If that's where you're at, this post is not for you. We've invited Anthony Cassino from SB Nation's UW Dawg Pound to come over and answer a few questions for all of you.

Gleason to enter WSU hall of fame during Apple Cup

The former WSU football and baseball player - and current ALS sufferer and advocate - will be the lone 2014 inductee during an on-field ceremony.

Of course, UW didn't crater out under Steve Sarkisian as WSU did under Paul Wulff, and for all the turmoil, the Huskies will be returning to a bowl game. That's thanks in large part to the talent on defense, which features a pair of potential first round NFL picks in Hau'oli Kikaha and Danny Shelton.

Should WSU even try to run the ball with Shelton plugging up the middle? Will sack specialist Kikaha break Luke Falk into pieces?

That and more. Read on.

CougCenter: Your coach has botched the end of a game. Welcome to the club! How does it feel?

UWDP: As someone who has been pretty critical of a lot of the moves Chris Petersen and his staff have made in their first year, I thought that the way they executed the end of that game and their rationale for doing so was completely defensible. I was one of what felt like very few people who was fine after the end of that game because the team actually played well, instead of having their typical performance where the defense has to drag the offense's carcass through four quarters.

But year one on the whole has been pretty frustrating, as the team has definitely underperformed its talent. Knowing that there are incredibly talented players like Marcus Peters and Kasen Williams who don't get to contribute because they haven't seen eye-to-eye with the new staff on everything can be maddening at times. It has been pretty encouraging over the past two weeks, as the Huskies have been playing their best football, which leaves me optimistic for the future as long as it's a "it took 10 weeks of the season for the new staff and players to get used to each other and the system" thing, and not a "it takes this staff 10 weeks to figure out how to use its players" deal.

CougCenter: Shaq Thompson is really awesome. OK, that's not actually a question. How about ... what makes Shaq Thompson so awesome?

It's just everything. I literally cannot think of a football thing that he doesn't do well. If they needed him to he could probably line up and knock in a 40 yard field goal.

CougCenter: It seems as though this game could come down to the play of the secondaries. First off, does Cyler Miles actually have the ability to complete some passes against what figures to be miles of space given up by WSU's young and inconsistent back four?

I think so. The offense has finally been tailored to what he does well, and it has shown up in the past two games. Early in the year they were throwing a lot of sideways passes, and he just doesn't have the arm strength to run those plays and not kill them by having the receiver wait all day for the ball to get there. Now they're letting him read the defense and use his accuracy and decision making, which are his strengths. He's still not at the point -- nor does he have the requisite weapons -- to where he can torch anybody, but he can make enough plays to put some points on the board.

CougCenter: Consistency has been an issue for UW's secondary too, with the dismissal of erstwhile potential first rounder Marcus Peters and the conversion of receiver John Ross to cornerback. How worried are you about their ability to slow down the Air Raid? 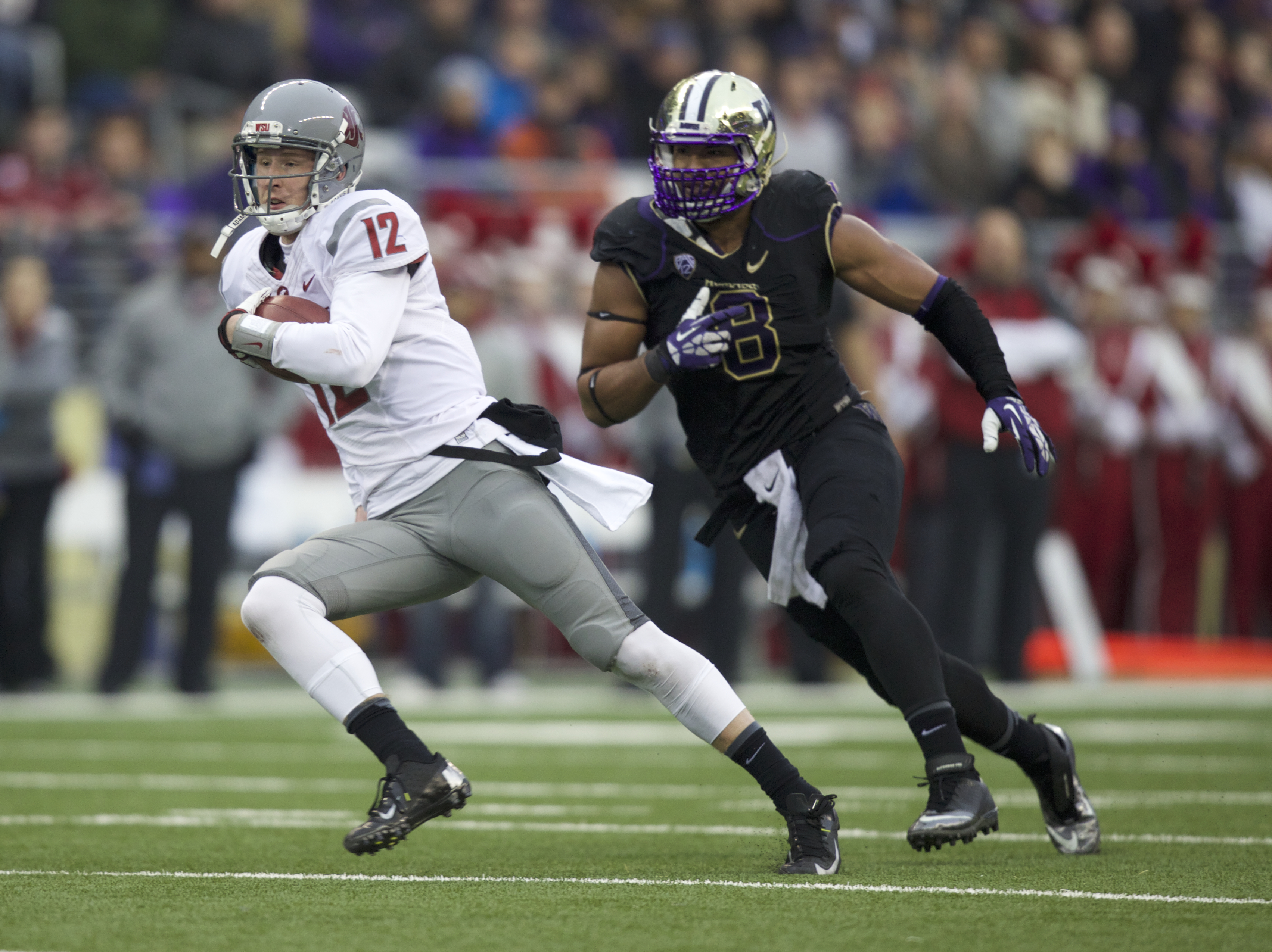 They'll be able to slow it down, it's just a question of how many plays they're going to blow. As the season goes on they've gotten better and more consistent, but they're still giving up big plays and whiffing on coverages -- like giving up a 3rd and 25 against Oregon State. If the game can be made about UW's secondary WSU is in good shape, but to do so the Cougars will have to deal with one of the best pass rushes in the country and a set of linebackers that covers pretty well.

CougCenter: Can you put in a good word with Hau'oli Kikaha to not break our only healthy, non-redshirting scholarship quarterback? Please? (Sorry, that's not really a question either. Still, the request stands.)

Good luck with that one. Oregon State was able to minimize his impact by throwing an extra lineman, a tight end, or a running back at him and often several at once. I guess it worked, because he got a sack on the first offensive play of the game but not much else, though UW did get three sacks from other players. You kind of have to pick your poison and more and more teams are smartly choosing to let the other UW players try to beat them, as evidenced by Kikaha having just the one sack in the last two games.

He does have 8.5 sacks on the year, so it's not as if he can't rush the passer. The problem that Shelton creates is that though he's not necessarily a dynamic pass rusher, he's definitely too much for just about any one college player to block, and when you've got another guy like Kikaha who demands a double team the math gets pretty hard. Unless teams want to max protect all game, the Huskies are going to get their shots at the quarterback, and teams have to be so worried about those two guys that Andrew Hudson -- who'll never be confused with an All American -- is among the national leaders in sacks.