2013 Cougar basketball got you down? The Pac-12 Network and your favorite GIF-A-Palooza GIF maker (on this website) has you covered with a trip down memory lane. Our time machine brings you back to a better time. A simpler time. 2008.

I had so many things I could have been doing on Sunday... But I didn't do any of those things. Instead, I went to Beasley and watched Washington State take on Oregon in a basketball match up. We covered it here and here. Read that... Because I don't really want to talk about it. Cougar basketball has me feeling depressed and, if you are paying attention, it probably has you down too.

Monday night I sitting at home, trying not to think about this team when I stumbled across something interesting on my programming guide... 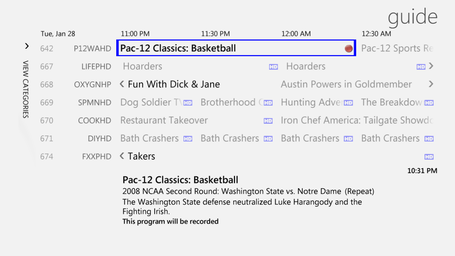 No... It's not that Hoarders marathon on Lifetime. It's that Pac-12 Classics airing on the Pac-12 Network. I saw that on my guide and the memories came flooding back. The 2007 WSU basketball team was the first Cougar team I truly fell in love with. I skipped school to watch the first tournament team in over 10 years beat ORU. I watched them lose to Vanderbilt in OT and was on the verge of tears. By the time 2008 rolled around, I was all out for that team. I still argue that there has never been, nor will there ever be, a more likable team than Rochestie, Weaver, Cowgil, Low and Baynes. I lived and breathed with that team.

I long for watching meaningful college basketball again. When your team is good and competitive , there is nothing more exciting.

Just for a moment, let's forget about the 2013-2014 Cougars. Let's jump into a time machine and travel back to a time where things were better. Dr. Suess' Horton Hears a Who was the top movie in America (barely beating out the classic movies "Shutter," "Tyler Perry's Meet the Browns," and "Drillbit Taylor"), Gas prices jumped to record $3.50 in many parts of the country, I was a week away from my 16th birthday and the WSU Cougars were ready to fight for a trip to the sweet 16.

(Special note: Gus Johnson was calling this game. Feel free to narrate your experience with the proper yelling and excitement inside your head.)

Here are the starting lineups for today's match up. The big pairing is Baynes and Harangody. Baynes, the last proper big man to wear the crimson and gray faces off against the Big East player of the year. Remember some of those names? Memories. Such great memories.

Taylor Rochestie. Remember that name? He was a great player in 2008, but that's not the reason I remember him. I remember him because of what he did in 2009. He carried that team and, in that senior night game, made what I still consider to be the single greatest show I have ever seen. Compared to that shot, this one is easy like Sunday morning.

What I liked about the 2008 team is that there wasn't one player that had to do everything. That's something we've seen year in and year out in the Ken Bone era. With the 2008 team, there were two top dogs. For me, no two things go together better than Low and Weaver. Not yin and yang. Not peanut butter and jelly. Not hot dogs and ketchup. Nothings goes together better than Derrick Low and Kyle Weaver. This is just an example of the terrible twosome working together.

I was just gushing about Low and Weaver together, there great... But apart, they aren't so bad either...

Observe below, Kyle Weaver displaying the prototypical attitude of the Bennett era defense.

And Derrick Low? Take a look at this shot with 10 seconds left in the first half. Are you kidding me?

Remember kids: Aron Baynes has never committed a foul. Never. Not once. It's as true today with the Spurs as it was in 2008 with WSU.

Notre Dame just could not stop Kyle Weaver. He was on fire and the fact that he got this shot to fall is proof.

The Pac-12 Network edited some stuff out of their rebroadcast. But, for some reason they decided to leave this ad for Big Brother in. The highlight (which you can't experience, but can imagine) is the amount of contempt that was audible in Gus Johnson's read.

You know... I've heard from a source that seemed slightly disinterested that the Big Brother house is crazier than ever. Personally, I can't wait for tomorrow at 8... Only on CBS!

If Gus Johnson's "I don't care" attitude were some kind of liquid, and his ad reads were some kind of container, said container would be overflowing. (Full disclosure: There was also a Big Bang Theory ad that he seemed perfectly fine with. Get your priorities straight Gus...)

Aron Baynes didn't score a ton of points in this one, but he did make his presence felt on the defensive side. (none of which was particularly GIF-worth... But it was good!) Anyway, here are two of the points he got, this time off of a great feed from Derek Low.

We've seen Kyle Weaver make shots, he's had assists, he's even stolen the ball. What else can he possible do? Let's check in on Kyle Weaver once more.

Just because Aron Baynes reaction shots are fun... (Note: He actually didn't commit this one... But whatever)

One name I haven't mentioned is a guy who seemed to fly under the radar, not only in this game, but in his entire career at WSU. Robbie Cowgill never got the recognition that the Kyle Weavers and Aron Baynes' got, but he was an important role player on this squad. Here he is making an impressive rebound and putback.

The Cougs were victorious and went on to face (and lose to) North Carolina just a few days later.

That will do it for our trip down memory lane. Thanks for joining us. Now... Back to reality where WSU will take on UW this Saturday at 3. You should watch it... Because I'm not going to be making any GIFs for it. I have to be there. You can't make me watch it again.