On their third coach in four years, the Cougars have been able to continue their remarkable run of success with a fourth straight NCAA tournament appearance.

This just doesn't happen at WSU.

Friday evening, at Lower Soccer Field in Pullman, the soccer team will kick off its fourth consecutive NCAA tournament appearance. It's the second consecutive year the Cougs have hosted a postseason match, and it marks the team's sixth NCAAs in seven seasons.

That's not what doesn't happen at WSU, though. It's rare, but a couple of other programs have been able to sustain that kind of success: Volleyball made it to eight NCAAs from 1991-2002 under Cindy Fredrick, and baseball advanced to seven NCAAs from 1975-1990 under Bobo Brayton. Not quite the same as six in seven, but comparable.

And actually, what happened to the soccer team on its journey from 2013 to 2014 actually does happen from time to time at WSU. It's just that ... well, when teams at this school go through what the players left behind have gone through, they never end up here.

The story arc here is a familiar one at WSU. Over nine years, coach Matt Potter builds WSU into one of the better programs in the tough Pac-10/12. After three NCAAs in four years, he's ready for a new challenge (and a pay raise), moving along to a more resource-rich program (in this case, Oklahoma). Athletics Director Bill Moos selects a young, vibrant, up-and-coming assistant from the southeast to take his place. And in two years, Keidane McAlpine lives up to his billing, taking the Cougars to heights they've never reached.

All told, the Cougars set or tied 30 different school records.

So, last December, McAlpine does what young, vibrant, up-and-coming coaches who experience unprecedented success at WSU always seem to do.

In the midst of one of the greatest runs of team success in WSU history -- one that appeared to have yet to reach its ceiling, thanks to planned facilities improvements -- Moos suddenly was faced with hiring his second coach in two calendar years.

And to top it off, the new coach was going to have to replace one of the great players in program history: Pac-12 player of the year and All-American Micaela Castain.

They don't lose both and just march right along into the postseason. But the 2014 WSU soccer team did. 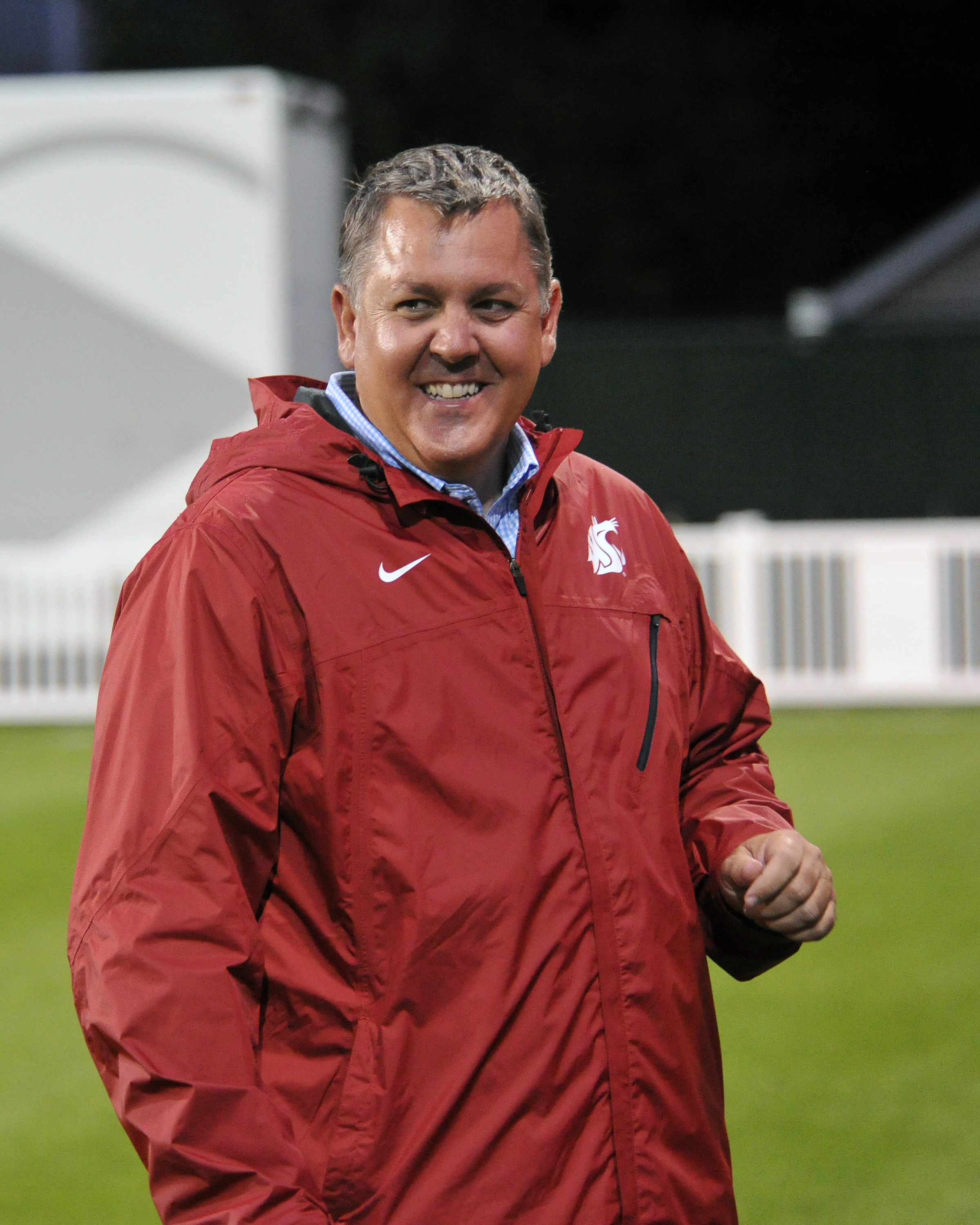 Steve Nugent has proved to be the perfect fit for WSU soccer. (Photo: WSU Athletic Communications)

If you listen to Steve Nugent talk for 10 minutes, you'll find yourself wondering why anyone, let alone a successful coach, would want to leave Pullman.

So much so that he turned to his interviewer, Deputy Director of Athletics Anne McCoy, on his way out of town and said: " 'If you don't hire me, I'm going to be really upset.' And I didn't mean upset mad; I mean I would have been sad."

Nugent uses the phrase "no-brainer" liberally in reference to WSU: The soccer, the academics, the conference ... all were exactly what any coach would be looking for, even down to Pullman simply being a great place to raise a family.

And yet, despite the run of success of the program immediately preceding his arrival, Nugent faced a stiff challenge. One that might have been bigger than the typical task of building a floundering program from the ground up: He had to convince a group of players -- eight of whom were on the third coach of their careers, along with nine more on their second, all still shell-shocked from McAlpine's sudden abandonment -- to buy into what he and his staff were selling.

"The biggest challenge for us was to get the players to believe in a new staff. That was our No. 1 priority," Nugent said. "The players, to get into their heads about who we are -- heck, I'm the third coach for some of these kids. Third set of assistant coaches. Third set of support people. It's not easy. ... You almost have to start over. There's a certain level of tough feelings and a certain level of attrition when changes happen. So our number one priority was the players."

Podcast: An interview with Steve Nugent

According to redshirt senior goalkeeper Gurveen Clair -- herself a member of the three-coaches-in-four-years club -- the players had done what Cougars do: They closed ranks, clinging to each other as family during yet another unwelcome transition in their program. And in that way -- beyond whatever Xs and Os the new coach brought with him -- Nugent appears to have been the perfect choice to navigate the ship through rough water.

That emotion is a defining characteristic of this group.

Said Clair: "I think you have to play with a passion and a desire. ... I believe emotion realty runs this team in the best possible way. We believe in each other, we have confidence in one another, and we let that type of emotion play the game with us."

In that way, Nugent again appears to have been the perfect match for this group. His passion comes through loud and clear when you talk to him -- seriously, give the guy 10 minutes to extol the virtues of WSU and he'll have you looking up real estate listings in Pullman as you contemplate moving back -- and it has resonated with his players.

"I think if you don't have (passion and emotion), you're wasting everyone's time, quite frankly. You've got to be passionate about what you do, and you've got to love the people that you're around. ... They feed off of their emotion, which is a good thing. As the season progresses, we use that emotion to do something bigger."

But while emotions are great, there also is the small matter of maintaining the level of play on the field despite a dramatic loss of talent. Gone was Castain, along with three of four starters on the defensive back line.

Perhaps the reason Nugent wasn't worried is because he knew he'd be able to deploy tremendous flexibility in coaching the talent on hand, from a strategic perspective. He told the Spokesman-Review shortly after he was hired, "We want to attack and make other teams chase us, and we want teams to hate it for 90 minutes. I was joking with our goalkeepers that I don't mind winning 4-3."

That hasn't been the case this year. After being one of the top offensive clubs in the Pac-12 in 2013, the Cougars have slipped to eighth in the conference in goals and actually have been one of the better defensive sides. 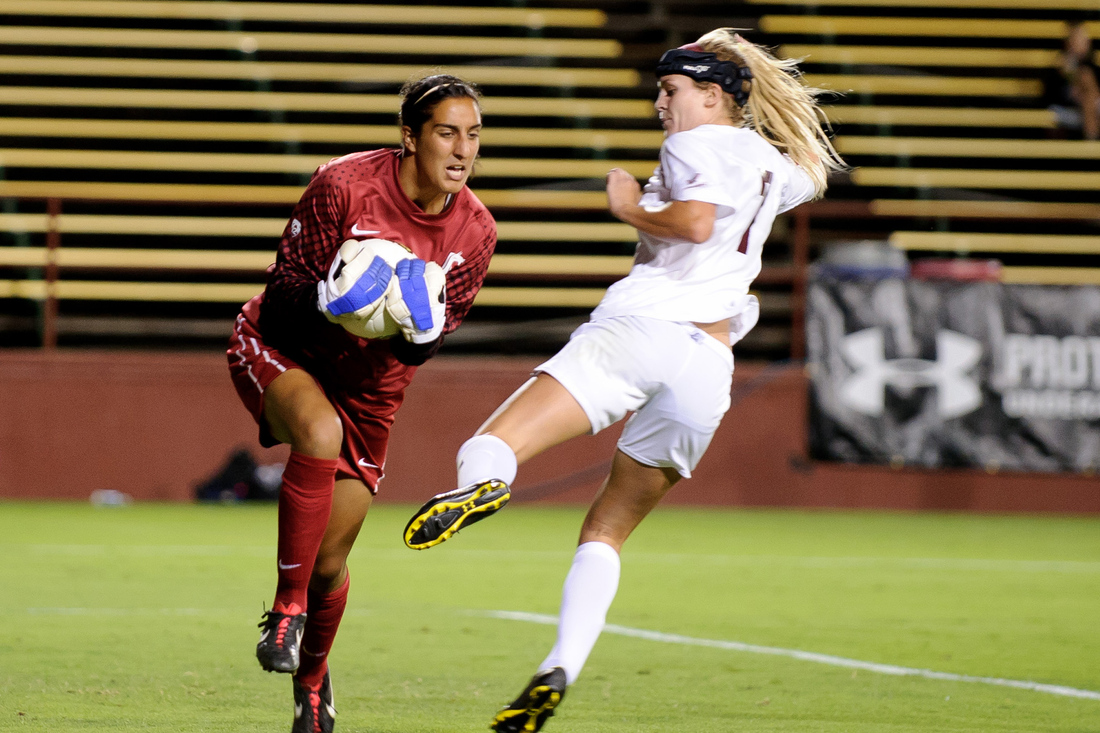 Clair credits Nugent for being able to adapt what he wants to accomplish to the talent on hand.

"Matt Potter was maybe a little more defensive minded when he was here, and then Keidane came in and was very possession oriented, and going forward with a purpose," Clair said. "And I think now, with Coach Nugent, it's very similar, kind of putting the two together. We've done very well defensively and we're still getting forward and creating ample opportunities to put the ball in the back of the net. We've tweaked the styles that we've been working with, but I think the biggest difference would just be that he's finding what works well for us and just going with that."

For his part, Nugent says people often make too much of style ("I'm in the business of winning"), and "just because you're not giving up a lot of goals, it doesn't mean we're just defensive -- it just means we're defending well." He notes that WSU played powerhouse UCLA with a straight up style in suffering a 1-0 defeat, and that the team is still generating a ton of chances, as evidenced by the number of corner kicks the Cougars have earned -- third in the Pac-12 during conference play. They just haven't been great at putting those chances away, but Nugent believes it's bad fortune more than anything, pointing to a six-goals-in-two-games outburst in back-to-back wins against Utah and Colorado just a few weeks ago.

Part of WSU's defensive success is simply having Clair in goal. A four-year starter, she's one of the best keepers on the west coast.

Having her back there "doesn't hurt, that's for darn sure," Nugent said. "She is one of the best I've ever coached. I tell Gurv the same thing before every game: 'We have a chance to win every game we play because you're in goal.' And it's the truth. Because of that, our team plays with extreme confidence in front of her."

The hope is that the team's experience and talent -- including a potential sleeping giant of an offense -- combined with the game being played at home will allow the Cougars to get started off on the right foot against Seattle U in doing something WSU soccer has never done before: Making it beyond the first two rounds of the NCAA tournament.

While emphasis always gets placed on postseason performance, one has to acknowledge that regardless of the outcome of today's match, or a potential matchup with either Clemson or No. 3 seed South Carolina next weekend, the season already has been a smashing success.

From top to bottom, everything we need to be successful as a soccer program is here. And it is going full speed right now. -WSU coach Steve Nugent

"We've been able to do that because of the support system we have," Clair said. "Yes we've had some coaching changes and loss of some players, but at the same time, we've brought in some really good ones and we have a great support system through the athletic department that kept us on a steady path.

"And a lot of the credit has to be given to the girls. It's not an easy transition at all and being able to do that multiple times and still have enough confidence in ourselves and our playing ability to keep doing what works for us and adjust to what the new staff asks of us. I think it shows a lot of resilience in us and that's something that all Cougar athletes should continue to do."

Nugent firmly believes big things are on the horizon. WSU is going to pour more money into additional renovations to Lower Soccer Field, including a dedicated operations building, and Nugent says whatever he's asked for from his bosses to make the program better, he's been given.

"I really expected tremendous support, and that's what we've gotten. That's what we've gotten," Nugent said. "I mean from top to bottom, everything we need to be successful as a soccer program is here. I mean it is here. And it is going full speed right now, from facilities, to support services for our athletes, to the community involvement, to the student involvement, from a fanbase perspective ... we've got it all."

That's something that just hasn't happened at WSU.