On WSU football and the nature of rebuilding a program

Starting over takes time, but how do you know where the program is at in the rebuild? Following the poor showing in the Apple Cup at ending the 2014 campaign with just three wins, was this season a major set-back?

Share All sharing options for: On WSU football and the nature of rebuilding a program

When a new coach takes over, the expectation levels can vary from program to program. Your established Football Factories demand immediate results and have typically gotten them in recent history. Other programs may be a little more willing to suffer the growing pains of a program rebuild, baby-stepping their way through a series of stages all programs experience when transitioning from bad to good. WSU is in the middle of those growing pains and while the Cougars certainly didn't take a step forward during a 3-win 2014, they didn't exactly step backwards either.

Since 2000, former Texas coach Mack Brown is the only head coach with a tenure of more than five seasons to finish No. 1 in the AP. Excluding Nick Saban's back-to-back crystal balls at Alabama in 2011 and 2012, The Great SEC Run Of BCS Championships were all won by coaches at or before their third year in the program.

Rich Rodriguez was ousted after three years at Michigan, just before his recruits won 11 games. Rick Neuheisel got the better part of four years, but was pitched before he was able to start his star, Brett Hundley. UCLA has now chalked three consecutive 9-win seasons -- all in Jim Mora's first three years -- for the first time in its history with Hundley under center.

After the defense failed to keep up with the strides made on offense, Mike Leach made a change.

Not every coach who doesn't make it past three years is unfairly fired, but the message of Big Time College Football is pretty clear -- win early or get replaced.

Other programs are not so quick to pull the trigger. Art Briles began his stint at Baylor with consecutive 4-win seasons, then a 7-win season. Fast forward three years and now they have a Heisman trophy sitting in a fancy new stadium, and an annual powerhouse of a program without any sign of let-up in the near future.

Mike Price won 13 games in his first three seasons. Win totals on those years; six, three, and four. Following the 4-win 1991 season, his Cougs won nine and beat Utah in the Copper Bowl.

In the face of that uniqueness, it can be surprising how common the themes of a program rebuild can be among the non-Football Factory type Universities. You hear similar concepts from various places, but this particular version can be credited to Dan Rubenstein and Ty Hildenbrandt of The Solid Verbal.

It's natural to equate stages with years, but that's not always how it shakes out. Some teams may spend only fractions of a season in a stage, others might take multiple years to push through.

Stage One: You will still lose, but not as badly

Congratulations on hiring a new coach! You're still gonna lose. It won't be as bad, probably, but it won't be good either. Players are either transitioning to the new system or a new school entirely, and in general, you're behind the learning curve. You are no longer getting completely waxed by everyone on your conference slate, only most of the really good teams, so some positives exist.

Stage Two: You will probably still lose, but it will be competitive

Now you're not getting blown out by everyone (only a few someones) AND you have chances to win games.  People actually think about playing you. Maybe they aren't worried, but they know you can be decent sometimes. You might have a shot at a bowl. You are beginning to feel respectable, kinda, until other fans harrumph at you for enjoying a "moral victory" or two. More than one season here and you begin to hate Stage Two, willfully amnesiatic (not a word, but go with me) to the places far below Stage One you just crawled out of.

Stage Three: You will win, competitively

Most of those close, nail-biter games you dropped, and all of the "almosts" you couldn't pull off in Stage Two are wins this time.  Your team competes every game, and wins a lot of them. Getting to a bowl isn't the concern anymore, getting to a good bowl is. You know you aren't a conference champion sort of team, but you know you could beat one if things go right. More than a couple seasons here and the coach "can't get over the hump."

There's no more "competitively" about the winning. You dominate teams you should beat. Your wins are mostly decisive and rather than just competing, your program is eyeing Top 25 finishes.  You have a program with realistic conference championship goals and a few cycles of top recruiting classes. 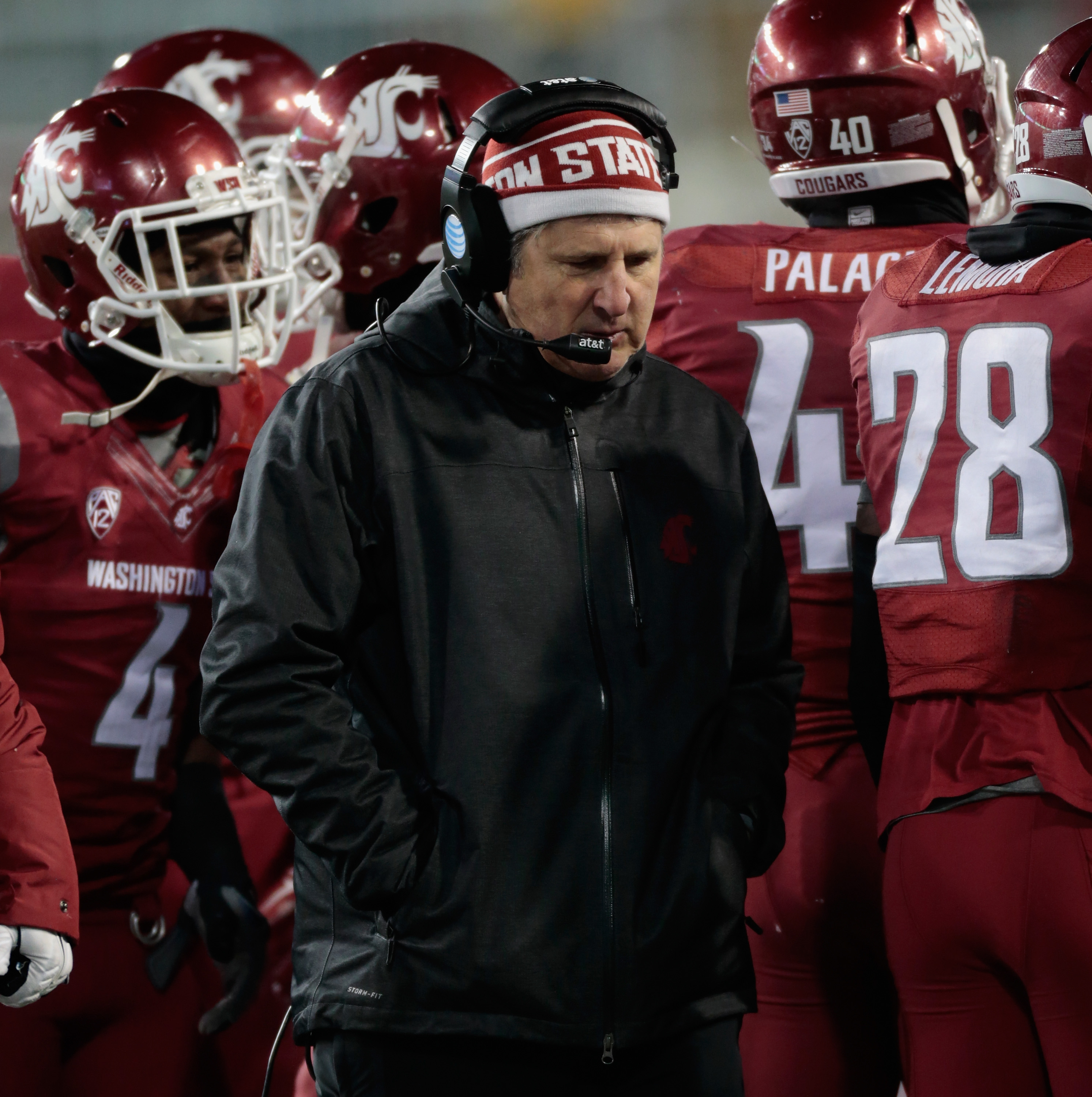 Unlike most coaches, Mike Leach didn't even get to start at Stage One. (Photo: William Mancebo/Getty Images)

It's apparent Wazzu has stalled a bit in Stage Two. The program is good enough to be competitive for most of the season, and bad enough where making a bowl game with six wins is close to the ceiling of accomplishment. The Cougs are, despite the disappointment this year, kind of where we could expect a program rebuild to be.

The transition out of Stage One was incredibly difficult, and explaining why becomes tired on a fanbase that has been through what WSU fans have -- specifically, hearing "the cupboard was bare" ad nauseum for four years.

People hate excuses, and understandably so. As was said toward the beginning of the season -- we thought we were entitled to good football because we made a financial investment, an emotional investment, and that's not unreasonable. That's the handshake agreement we make with fate, and Bill Moos.

When a person sees their investment as significant and worthy of a return, they can feel cheated if returns fall short. Excuses only undercut those feelings. "Excuses" do not exist without expectations; they are merely "explanations" when emotion is removed. Leach's hire set expectations: His resume alone did that.

But perhaps the true state of the program was lost in the "sizzle" of 2012.

Following that first season, which has been described as "tough," "challenging," and "awful" by some of the players, Leach recruited a class that improved in all national rankings (Scout reflected a jump of 10 spots), and he tripled the average number of total BCS offers compared to classes under Paul Wulff. And it still wasn't great, or even really good when compared to the rest of the PAC-12. To say Leach started out in a hole would be inaccurate; the program was closer to Big Sky in terms of talent than many people would care to admit.

Because Leach took over at the same time Mora, Rodriguez and Todd Graham started at their respective schools, it's common to want to compare their growth, their trajectories. It's a proposition that quickly reveals itself as nonsensical with even the briefest glimpse of their starting positions.

- ASU was coming off consecutive 6-win seasons and was ranked as high as 18th in the AP the season before Graham took over.

For those forgetting where WSU came from:

No one in the program Leach inherited experienced a winning collegiate season, let alone an AP rank, at any point. Leach started below Stage One, while his peers boarded buses at Stage Two. It shouldn't be surprising that in one year the others were knocking on Stage Three's door, and now after three years are comfortably in it and approaching Stage Four. That's not to say anyone who took over those programs would have had that success -- they are all outstanding coaches -- but it wouldn't be honest to say their starting line was the same chalk Leach used either.

The past is 1) embarrassing and 2) not exactly useful to discuss now, but some context does need to be given. Knowing where you started is perhaps more relevant than a year-to-year assessment of growth when selecting how wide of a lens should be used to view the rebuild.

2014 was a wasted season for WSU. Not in a "garbage, useless trash" sort of way, either. Rather, if you buy a $30 dollar cut of steak and leave it in your fridge when you go to work, but the power cuts out at your apartment and it's over a hundred degrees outside ... you get home, your apartment's an oppressive 95 and your fridge hovers at a sticky 80. That nice steak you were so looking forward to grilling and enjoying? Nope. It and everything else is rotting. That sort of wasted. The potential was there but never realized, and now everything stinks because of it. 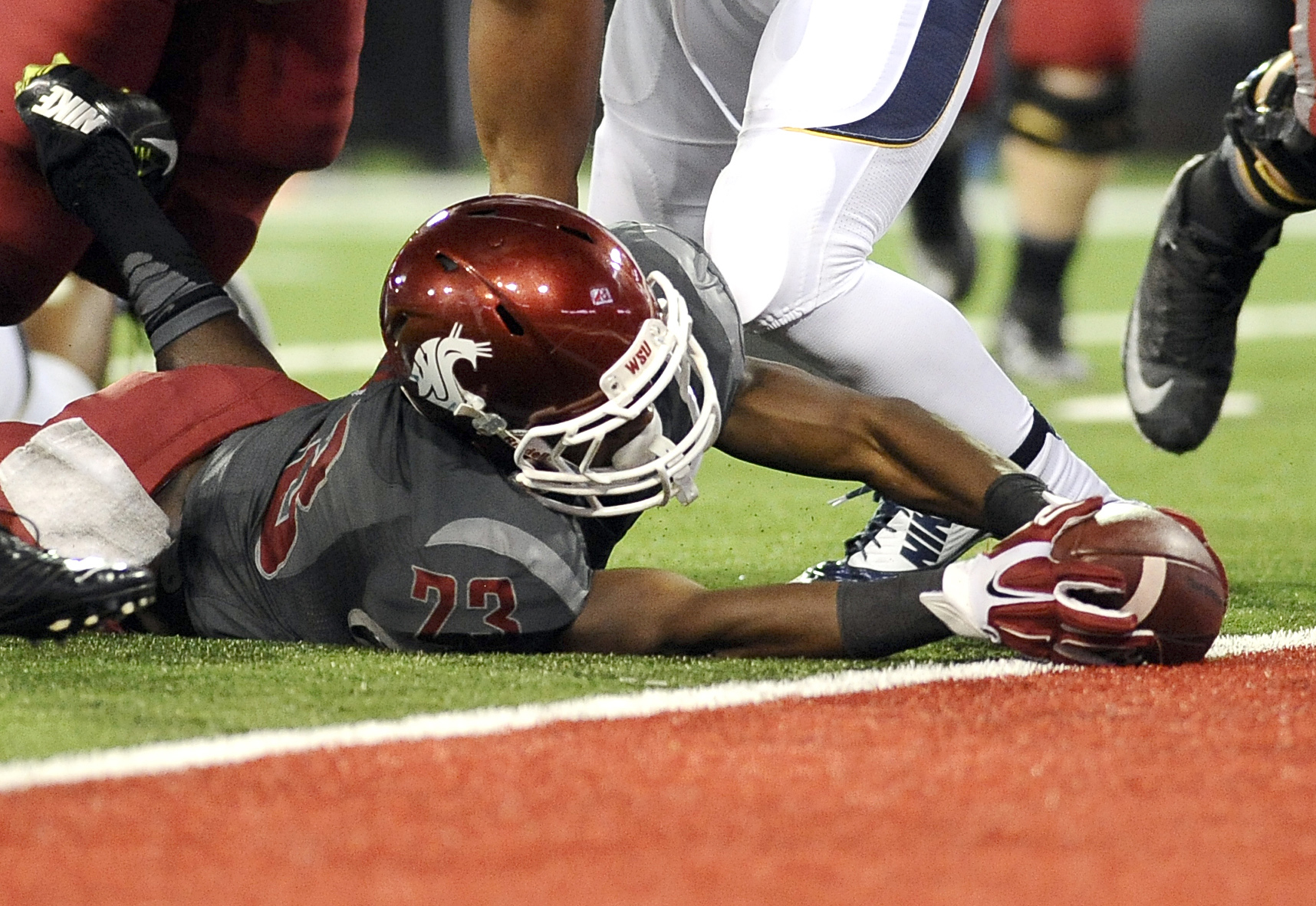 This touchdown that wasn't would haunt WSU, as a missed 19-yard field goal moments later doomed the Cougs against Cal. It was one of a number of unfortunate events that cost WSU this season. (Photo: James Snook/USA TODAY Sports)

I'll still contend this was a 7-win football team that hardly had anything go its way, conceding it was just bad enough to let catastrophically bad things happen at the most inopportune times, multiple times. That is the disappointment. It is also why the rebuild can still look as "on schedule" as anything with this much inherent chaos can be said to be.

Yes, winning fewer games in a subsequent year is a "step back", but only in the literal sense. Only the myopic base program evaluation solely on win totals.

Improvement is rarely linear, so don't expect it to be. Note where the program is in the grand scheme of a rebuild rather than ask, "What have you done for me lately." Were the Cougars competitive? Yes, mostly. They were a fumbled punt away from beating bowl-bound Rutgers, didn't show up against bowl-bound Nevada, were a 19-yard field goal away from beating Cal, and took Oregon to the wire. It doesn't take any special optimism to see where this team could be sitting with six wins instead of three.

Arizona whipped them, but won the South; USC whipped them after they lost their starting quarterback and team leader; ASU whipped them, with the help of five turnovers. Three of five ranked (at one point or another in the season) teams put them away without much of a fuss, but they beat one and played the other competitively. Stage Two. It'd be the same if they'd beaten Cal, Rutgers and Nevada. Those three wins would change a lot because "6" is a magic number, but when a more global perspective is forced ...

You don't advance a stage every year. Simply be cognizant of how long you've spent there and be realistic about how long someone in your station should tolerate a holding pattern.  The blue bloods of the world operate on a different geological clock than we do here -- and that's not admitting some kind of defeat, it's observing a current reality. Year Three shouldn't be a make or break season for a coach at WSU like it would at Florida, Auburn, Michigan.

If the program is given time to grow and get there, this season will be remembered for the wasted-potential season it was, and not the 'giant step-back' some are claiming it to be.