For the Cougars, the defensive coordinator search may not be about hiring the best coach, but finding the right fit.

It's been more than a week since Washington State fired defensive coordinator Mike Breske and the Cougars are yet to fill the vacancy. A few names have been floated as potential candidates, but so far, the search remains relatively quiet. It might stay that way, too, with a possible candidate still needing to coach in a bowl game before the move is made.

While it's easy to cobble a list of names together, it's mostly a futile exercise. In 2012, dozens of names were rumored. First Louisiana Tech's Tommy Spangler was said to be the leading candidate. Then Brian Stewart was rumored to be coming to Pullman, and of course there was also the brief Bobby Jack Wright rumor. Ultimately, Leach hired Breske, a name we didn't hear until late in the process. That isn't to say a name already floated as a candidate won't end up with the job, just that speculating on specific candidates this early in the process is mostly a waste of time.

We'll look at some names thrown against a wall and see if anything sticks, but first, let's get a better idea of the type of candidate Leach is likely to hire and the position itself.

The former WSU safety aired his opinion on the current state of the program on Twitter and wants WSU to get more former players involved.

No, Mike Leach is not going to Houston

The WSU football coach did his best to make it clear he doesn't have any plans to go anywhere.

What does WSU have to offer?

There is no question defense is going to be the second fiddle in Pullman as long as Leach is in town. Offense is king, but that doesn't necessarily make the defensive coordinator job a bad gig. Here are few of the selling points.

WSU's new defensive coordinator isn't going to be among the highest paid in the country, but he will certainly receive a competitive salary. Breske made $376,000 last season. He was the highest-paid assistant, with Eric Russell sitting at No. 3. With both gone, there is a decent pool available to make a move. Athletics director Bill Moos showed he was willing to increase the assistant coach budget last offseason, adding $500,000 to the budget, so it's not out of the realm he'd bump up the funding again. It's safe to say WSU can offer at least $400,000 a season, possibly upwards of $500,000.

Going on the USA Today database of assistant coach salaries in 2014, a $500,000 a year salary would put the Cougars somewhere in the upper-third of DC salaries. It's not enough cash to lure anyone and everyone, but an enticing offer, especially to a coach not at a power five school.

There is some young talent in place and a few nice prospects in the recruiting class. There is certainly room for improvement, if there wasn't, the job wouldn't be open. But, overall, the cupboard isn't bare including some solid upperclassmen and a few young players with a lot of potential.

Beyond that Leach has shown the willingness to move top-end talent to the defensive side of the ball and devote resources to defense. Charleston White and Sebastian LaRue are among the most-athletic guys recruited by this staff and both started at wide receiver before landing in the secondary. Joe Salave'a and Ken Wilson are arguably the top two recruiters on the staff and have brought in some solid contributors already.

Who is the ideal candidate?

WSU ran a variation of the 3-4 under Breske, but the Cougars are far from pigeonholed into staying with it. There would be a transition if a new defensive coordinator brought in a significantly different scheme, but there is going to be a transition period regardless. Leach showed interest in running a 3-3-5 stack defense before and WSU is loaded with young defensive backs. Maybe the move is to move to a 4-3 and let Salave'a load up on defensive linemen.

It is a relatively minor consideration, but the switch between an even front (four down lineman) and an odd one (three, or five down lineman) does impact the type of recruit they'd go after.  It also changes technique (one-gap vs two-gap) that'd have to be learned.  Nothing significant enough to rule out a change, but something worth noting.

Attack, attack and attack some more

When WSU was at it's best under Breske, it was when the Cougars were getting pressure and forcing turnovers, the perfect fit with a Leach offense. The Cougars struggled to do that this season, failing to create turnovers with any regularity. Big plays are going to happen. If you get burned, it just gives the ball back to the offense. The key is finding some consistent rewards with that risk. Be multiple, bring pressure from different places and in different looks. Create havoc and confusion. Sitting back and trying to play a bend but don't break defense is not the best of fits.

The Cougars don't want to grind the game away on the defensive side of the ball. From a game management perspective, there's two major reasons why that's not optimal. One, you want to maximize the number of drives for this offense. Losing time on defense is detrimental to that. Two, the offense - when operating correctly - won't be on the field long.  They will score or turn the ball over with the end result being little respite for the defense either way. A defense structured to bend will be tested beyond its limits. Running a conservative system is going to require a ton of depth when the defense is sent back on the field a couple minutes after just being on for an extended drive.

WSU started a safety in the season opener who converted from running back a week earlier. On paper, the Cougars are building some solid depth, but as we've seen over the years, WSU has had a hard time maintaining Pac-12 quality depth, especially on the defensive side of the ball. Maybe it is finally over that hump, but even if that's true, it may not be easy to stay there.

Mike Leach's best defense at Texas Tech belonged to Ruffin McNeill, now the head coach at ECU. That defense was about pressure, yes, but it was also about dropping players into space to fill the gaps. It would give up big plays in the run game, but also would force turnovers in the passing game -- two aspects that are inevitably linked. You often can't get the one without giving up the other.

The defense created turnovers by creating confusion. When the blitz came, defensive linemen and linebackers would drop to fill in holes. It put players in position to create turnovers not by simply bringing pressure and leaving the secondary in man, but by bringing pressure with players dropping into zone.

Simply bringing pressure to bring pressure is a high-risk scenario. Mitigating the risk by confusing the quarterback with surprise zone drops is a way confuse the offense and create turnovers while taking away the easy hot reads.

The aggressiveness and confusion requirements give us a few ideas about which schemes could apply those principles. While we don't know exactly what Leach would prefer, or if he's even hiring based on scheme, we do know a bit about what that defense would need to look like to be successful opposite an Air Raid offense.

A lot of names have already been floated. Let's break 'em up into a few categories.

Coaches with WSU or local ties

This is an obligatory category in a college search. There is an opening? Hire that player or coach who was once good here! This is where guys like Chris Ball get thrown in. Never mind the fact Ball is probably happy with his current gig at Arizona State, he has WSU ties! Hey maybe Marcus Trufant wants to get into coaching, he was a great player for WSU.

Is it possible the new defensive coordinator will have WSU ties? Sure, but doubtful.

Local candidates are also popular darts to be thrown against the wall. The Seahawks have a great defense, but it seems unlikely Ken Norton Jr. or Kris Richard or others would come to Pullman. Richard is an excellent defensive backs coach, so that would be a fun pipe dream.

Rex Ryan is about to get fired, maybe WSU can get him. Leach spent a week at Jets practice once! Will Muschamp, Bo Pelini and others are also looking for work. All are pipe dreams ranging from never, ever, ever to really unlikely. Unless the Cougars are going to pay a coach more than $1 million a year, it's not going to happen.

Several names have been mentioned in the last week, including Clancy Pendergast, Ellis Johnson, Kalani Sitake and Andy Buh. Those four would appear to be unlikely going on fit and situation. Pendergast is an excellent defensive coordinator, but is probably a better fit for the NFL. He reportedly hates to recruit and his pro-style defense may not be a great fit opposite the Air Raid.

Johnson made more than $800,000 at Auburn and just got fired. He has deep SEC ties and a move to Pullman and the Pac-12 doesn't make a lot of sense.

Buh was fired at Cal after a season of really bad Bears defense. Selling him as the solution with the most recent line on his resume would be a very tough sell. There are ties to Leach and Buh might come well reviewed from coaches Leach trusts, but the smell of that Cal defense is far from wearing off.

Sitake, the current Utah defensive coordinator, is reported to have issues with his current situation. He may be unhappy, but he also makes $500,000 a year. Maybe he'd jump in the conference after a decade with the Utes, but that's far from certain. Throw in the fact he may have to take a pay cut and it seems less likely. 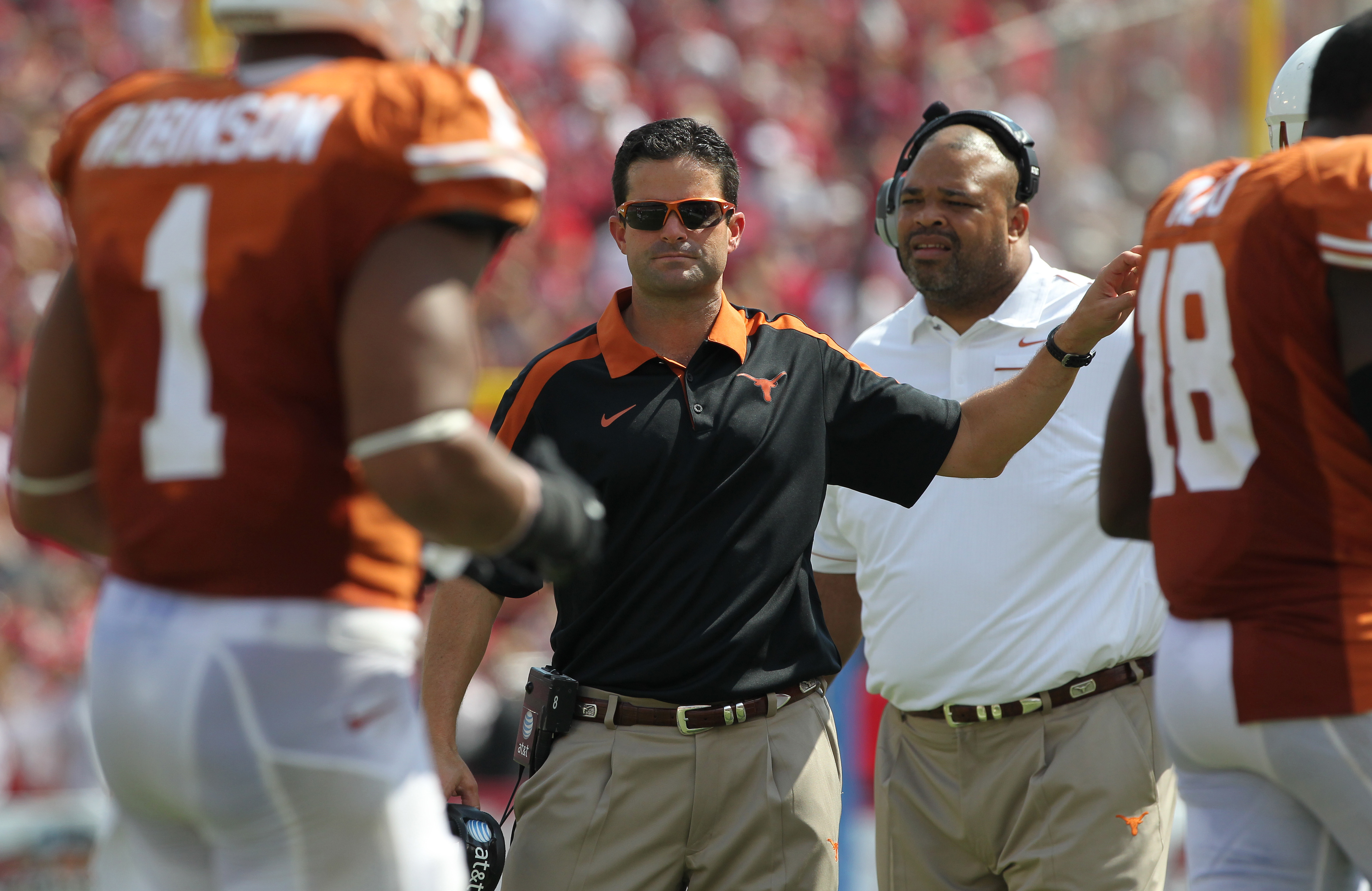 Despite some well-known issues at Texas, Diaz would make a ton of sense. He's had success everywhere he's coached and got caught up in a tire-fire of a situation in Austin. He's known for his fire zone blitzes and exotic fronts used to create confusion for opposing offenses. He's had a ton of success as a coordinator including against the pass, run and in forcing turnovers. His resume is impressive. His Louisiana Tech defense forced 40 turnovers this season, the most in the country and a whopping 32 more than WSU.

Odom is current the defensive coordinator at Memphis, but does have a tie to the current WSU staff. He coached at Missouri with David Yost, so WSU should know what it would be getting. He's done more with less at Memphis, but it may not be easy to pry him away. Arkansas and a few other teams have shown interest, but Odom is yet to jump. He has experience coaching defensive backs and was even the recruiting coordinator at Missouri for a bit.  From how well respected he appears to be and the results he's gleaned at Memphis, it appears Odom would be a very strong hire.

Houston's David Gibbs could be looking for work depending on how the coaching change at Houston shakes out. He has a ton of NFL experience and has a background coaching the secondary. His defenses at Houston fared well, even with an offense that throws the ball a good amount. Houston's defense also finished fifth in the country in turnovers forced with 30.