It's a battle for last--a place where both schools are quite comfortable.

This one has been circled on the calendar for months (8 p.m. PT, ESPNU). The calendar is from 1986, but that doesn't matter. You got a great deal on calendars that year, and you figured the dates would line up again plenty of times. You bought eight , figuring modern medical science would keep you going for that many cycles.

Now that new mole on your arm has you thinking the remaining four calendars may be better served as gag gifts soon. Another dark reminder that Marty McFly's hoverboard is still a dream.

But you still circled that date months ago, knowing it would come to this. Knowing WSU would have that chance to make up some historical ground, or dig itself deeper into a dubious hole.

Next to the browning calendar is a tattered piece of paper hanging on the wall, something you started at a young age. Most kids were obsessed with the best, but you've always been fascinated with the consistently bad.

The numbers on that paper change every year for at least one team, and WSU, as well as its opponent tonight, have been seeing their numbers grow rapidly recently. Your friends see the paper, and suggest using a computer to replace the old list. They say even the most basic of data visualization programs can create something like this: 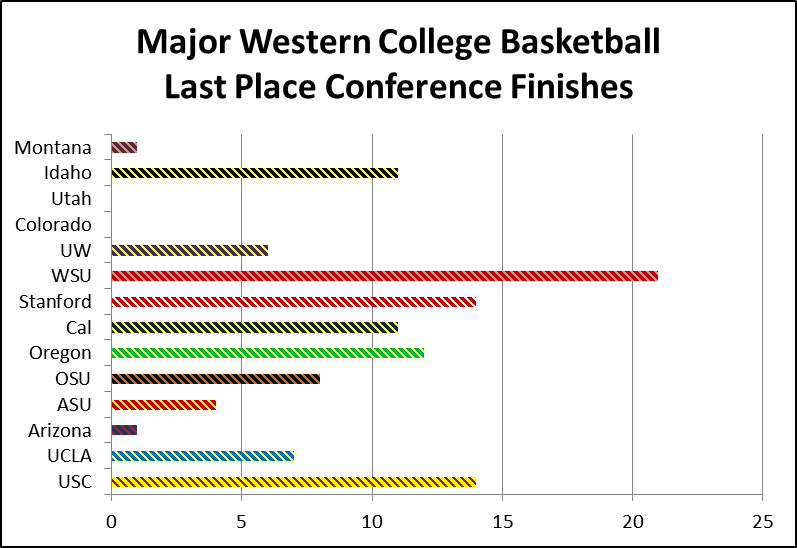 But no, your tattered list works just fine. Sure, you may eventually have to get a new piece of paper if WSU continues at this rate--21 overall with it becoming an ever-more frequent occurrence in the last 20 years. But today Washington State has an opportunity to ensure someone else gets a check mark this year-- and that someone else is USC of all teams.

USC is tied with Stanford for the second highest number. A loss tonight would break that tie. It's one of the more exciting nights for your little list in a while.