After dropping a Mom's Weekend series at home to Oregon State, a huge showdown with Oregon looms on the road.

The WSU baseball team has made up some ground in its quest to reach the NCAA tournament for the first time in years, but with the season now more than half over and just 21 games left to play, the Cougars have put themselves in a position where they're probably going to need to win 16 of those games just to get into the at-large conversation.

That's how many wins the incredibly useful site boydsworld.com projects the Cougs to need to get in the top 45 of the NCAA's RPI metric. Teams outside the top 45 obviously can be selected, but that's not where you want to be if you want to feel any kind of good about your chances on Selection Sunday. WSU currently sits at 98.

The one big thing the team has going for it at the moment is that with four Pac-12 series in the books, the Cougars are in a three-way tie for fourth place in the conference at 7-5. If anything can overcome a subpar RPI, it's an excellent league record in one of the country's premier conferences.

We haven't done one of these baseball features in a couple of weeks, so let's catch you up on the goings on if you haven't been paying attention.

The Cougs took care of business against the Spartans after getting off to a bad start on the night coach Donnie Marbut was injured in an auto collision, and then followed that up with an excellent sweep of Cal. The midweek loss in Tri-Cities to BYU -- a pretty awful club -- hurt the RPI quite a bit, but going 6-2 in that stretch still was good.

It felt like the Cougs really might be cooking when Joe Pistorese tossed a complete game gem against Oregon State last Friday. But the Beavers apparently were offended by just their seventh loss of the season as they roared to life the next two days, smacking around Tanner Chleborad, Jason Monda and the rest of the pitching staff. Dropping the series wasn't an unexpected result, and getting at least one win against the powerful Beavers was good. It's just hard to stomach a chance at a series win against a great team slipping away. Beating Gonzaga in Spokane was a decent consolation prize.

Let's take a look at who's been playing well over the past few weeks.

We've featured Yale Rosen in this space before, but we have to do it again. In the 12 games listed above, Rosen went 19-for-43 with seven walks, three doubles, a triple and three homers -- the last of which was a three-run shot to give the Cougars the runs they needed to beat the Bulldogs. That good for a .442/.529/.767 line and 1.296 OPS. He was named the Pac-12 player of the week for his performance against California, during which he went 7-for-10 with a pair of doubles.

Rosen has proven himself to be the team's premier hitter, leading the Cougs in batting average (.376), on-base percentage (.479), slugging (.598), walks (17), doubles (10), triples (2) and homers (4). His average is fourth in the Pac-12, and he's right up there with Oregon State's Michael Conforto in the conversation for conference's best hitter.

People are starting to take notice. Opposing pitchers are being more careful; OSU walked him four times in the series and hit him with a pitch, and seven of his 17 walks this season have come in the last six games. He's also got the attention of draftniks -- Scout.com's most recent projection has him as a fourth round selection.

If you get a chance, watch him hit so that you can see what "completely locked in" looks like. 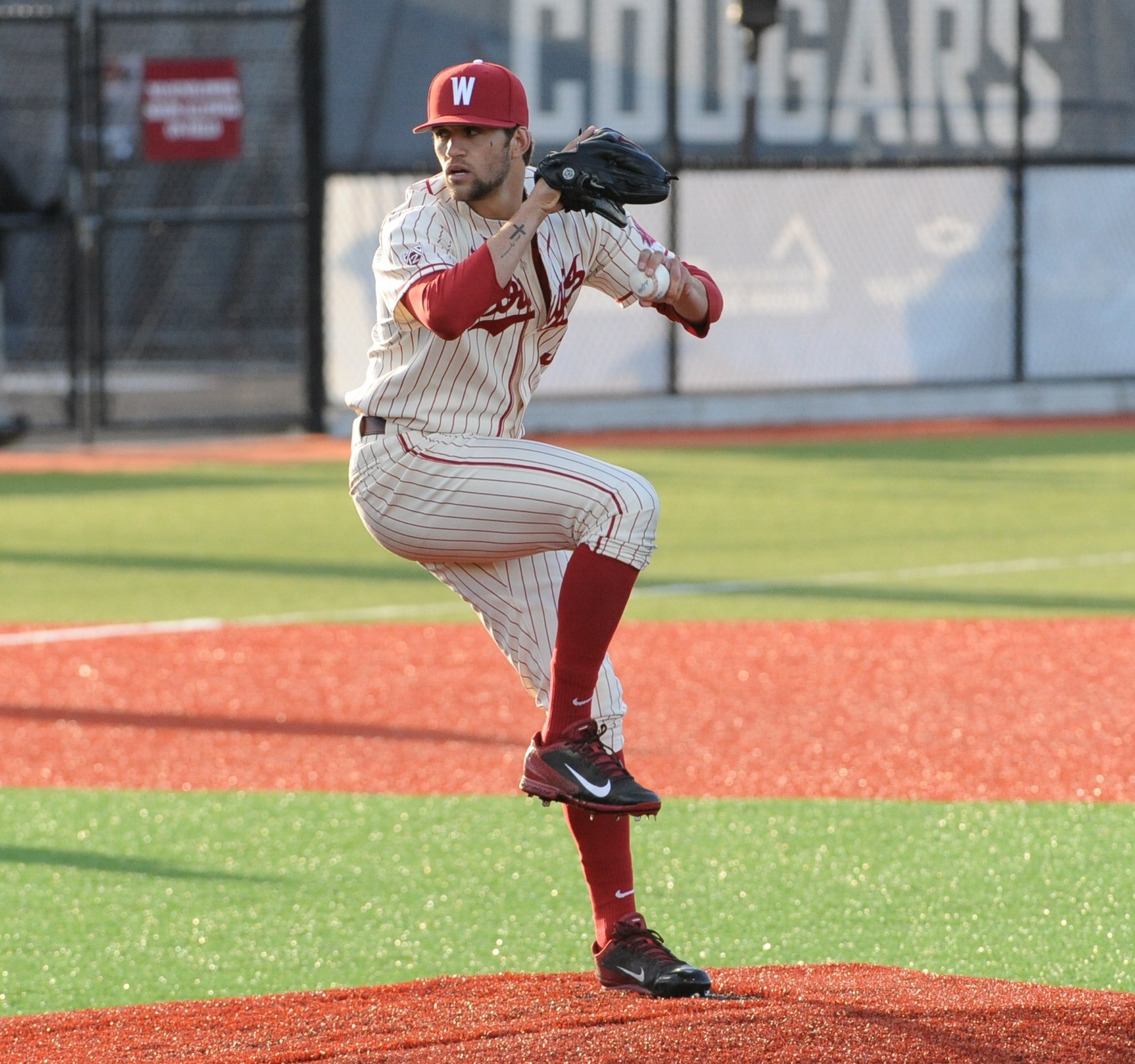 The Oregon State offense is tops in the Pac-12 in runs scored per game -- 6.4. That Pistorese was able to hold the Beavers to just one run on four hits (with four walks) is incredible. The Pac-12 agreed, naming him the conference's pitch of the week.

This wasn't a one-week fluke for the Friday night starter who began the season out of the rotation completely. He's leading the team in ERA (2.76) in his last two games -- which included a complete game shutout of Cal the week before -- Pistorese has allowed just one run in 18 innings on just nine hits with nine strikeouts and six walks. He's been as good as any pitcher in the league the last two weeks, even outdueling the guy who has been the Pac-12's top thrower, OSU's Ben Wetzler.

After three straight series at home, the Cougs head back out on the road for another huge opportunity. They're in Eugene, Ore., where they'll be starting a three-game set with the Ducks on Thursday. Oregon is either the 10th or 23rd best team in the country depending on who you ask, but perhaps more importantly, the Ducks are one of the other two teams tied with WSU in fourth.

There's a chance for some separation here - in either direction. Remember, the team needs to win three of every four games the rest of the way. That means winning every series.

The Ducks are a team built around their arms; the top three guys in the rotation each sport an ERA south of 2.60, and Oregon is holding its opponents to a ridiculously low .217 batting average. The Cougs did get a bit of good fortune, though: Freshman phenom Matt Krook, who leads Oregon in ERA (1.79) and has struck out 60 batters in 45 1/3 innings, won't pitch this weekend after some arm stiffness sidelined him two weeks ago. He was a first round pick of the Marlins until he failed a physical.

The guys that are left to pick up the slack aren't terrible, though -- Trent Paddon, the new third starter, has a 3.38 ERA and opponents are hitting just .207 off him.

Third baseman Mitchell Tolman, who has been the designated hitter while recovering from an arm injury, is the Ducks' best bat; he's hitting .351/.466/.504 and was named the national hitter of the week after a recent stretch in which he hit over .500 in 13 games. He might be the only guy in the country who can make Rosen look somewhat lukewarm.

A series win here makes the postseason look like even more of a possibility. A series loss means near perfection will be required the rest of the way. No pressure, guys!

You can watch the entire series, as it is streamed live by Oregon here. Game times are 6 p.m. Thursday and Friday and 2 p.m. on Saturday.