For his effort, he gets a free t-shirt! 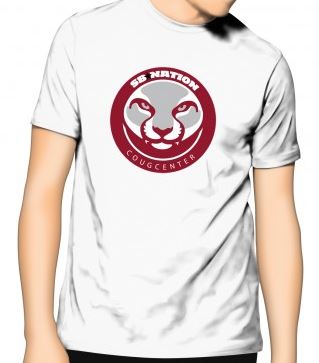 One of the tees in the CougCenter store from which the eligible winner can choose.

The 2014 NCAA tournament went in the books on Monday night with Connecticut winning the title, but the CougCenter Bracket Challenge was over on Saturday, as nobody in the contest picked either UConn or Kentucky to even make the championship game.

That meant airon26 still was able to take home the title on the strength of having picked Florida, Wisconsin and Kentucky correctly to the Final Four; he was the only person to correctly pick three of the four. He edged out EZCREW, who was ultimately done in by his unfortunate pick of Wichita State over Kentucky.

That means airon26 is the winner of the free shirt from Gameday Depot. He'll also be immortalized in the CougCenter contest hall of fame.

The full results will be posted at the bottom, but In case you are wondering the highest finishing author was Kyle Sherwood, who finished tied for 13th with 105 points. Yours truly turned in his annually pathetic performance with 89 points, but that wasn't the worst author bracket: Brian Anderson's coin flip bracket finished dead last with 62 points.

Speaking of authors, Craig Powers was the runaway winner in our author draft; he racked up an absurd 68 points thanks mostly to picking up UConn at the end of the fourth round. The Huskies earned him 24 points, which was only two points less than Sherwood earned with his entire team and was more than Craig racked up in the 2013 competition. Craig also benefited hugely from Dayton, which earned him 15 points. Those two teams combined to score more points than everyone but Mark.

Our guest player, the Spokesman-Review's Jacob Thorpe, comported himself well, finishing third thanks to a savvy pick of Kentucky sixth overall.

Interestingly, only two of our final 20 picks earned any points: Mercer (Craig, of course) and Stanford (Mark). Pretty good showing by us in that respect.

Full results of the author draft:

And finally, here are the full results of the bracket challenge. Thanks everyone for playing!