Cougar baseball ends the season with a loss

The unofficial start of summer has arrived and WSU welcomed it by closing out the baseball season with a loss.

Share All sharing options for: Cougar baseball ends the season with a loss

The NCAA Baseball Tournament selection show will take place this morning, but WSU will not be apart of it. We've known that for a while after the Cougars struggled to string wins together and dipped below .500. The season got off to a rough start and while WSU worked it's way out of the hole, the Cougars simply weren't consistent enough to ever make a serious run at the postseason.

This weekend's series was a good example of that. A late inning collapse cost the Cougars a win against No. 21 Arizona State on Friday. WSU evened the series with a win on Saturday only to drop the rubber match 6-3 on Sunday. All three games were close and the Cougars could have won two or even pulled off the sweep, only to instead come away with a single win.

For those of you looking for some Memorial Day reading on Memorial Day, PJ took you through a little history lesson yesterday and the post is well worth your time. Now is also a good time to re-visit WSU Athletics' 17-part series on WSU Veterans.

This is the most-patriotic WSU photo I could find in the SB Nation photo tool: 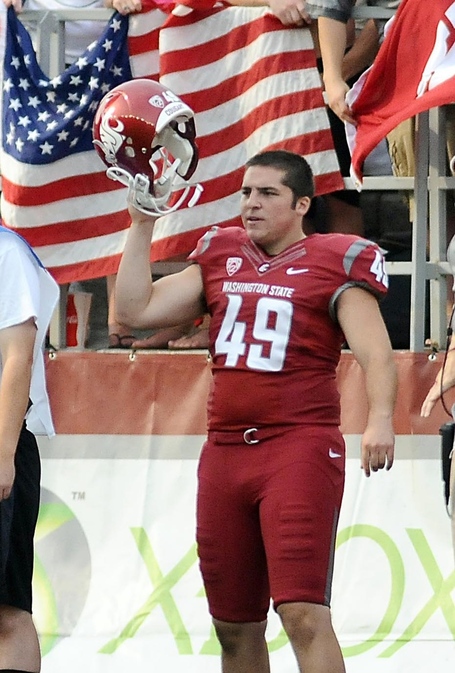 ASU tops Washington State in regular-season finale | FOX Sports on MSN
PULLMAN, Wash. -- The 21st-ranked Arizona State baseball team won its eighth Pac-12 series of the year with a 6-3 win over Washington State in the final game of the regular season on Sunday at Bailey-Brayton Field.

ASU Baseball: Sun Devils take series from Washington State, finish third in the Pac-12 - House of Sparky
The Sun Devils completed their regular season Sunday afternoon with a 6-3 over the Washington State Cougars. They took two of three on the road trip, winning Friday by a 12-8 score, and dropping a 10-7 decision Saturday evening.

SEC/Pac-12 Challenge: Ole Miss vs. Washington State | AL.com
Welcome to the SEC-Pac 12 Challenge. Using the college football simulator at ncaagamesim.com, we're pitting the SEC's top 12 teams last season against their Pac-12 counterparts. Over the next couple of weeks, we'll reveal the outcome of those games-one by one, working our way up from the two 12th-seeded teams-until we see how the league's big dogs, Auburn and Stanford, fared against each in their virtual battle.