Coug fans might finally get a crimson end zone! Just one, though.

Martin Stadium has received a few face-lifts throughout the past decade, most recently in the form of two projects that completely transformed the out-post of the Pac-12 into a home field truly worthy of the Conference.

Throughout the entire process, it seems, there's always been a "yeah, but..." among fans.

We've teamed up with WazzuWatch.com on this contest, where you can win a free Rivals subscription. It's free to enter!

What about getting crimson end zones?

The athletic department has hinted at crimson end zones for a while now, actually going all the way back to September in 2012, where Bill Moos said, "The plan is indeed to install crimson FieldTurf in the end zones. We held off due to the prospect of construction of the football-operations building, which would encroach onto the west end zone."

Fans of not grass-colored end zones -- rejoice! -- you're likely getting colorful end zones ... but maybe not the ones you all envisioned. An image seems to have been leaked, presumed accurate at this point (we've seen it from other reliable sources, too), that shows a mock of the athletic department's design:

It shows one end zone crimson next to the recently opened-for-business Football Operations Building and in front of the undoubtedly raucous "CrimZone" student body contingent; the other end zone is gray at the east end of the field.

The end zones have a diagonal geometry that's become standard for WSU branding (the same pattern can be found on FOB floors and along walls, and also in the club and suite area in the stadium), and create a gradient-like effect from one side to the other.

The gray side slides from the anthracite uniform color to the standard gray, with the crimson side transitioning from a darker, more maroon shade of crimson that's been used by the team in the past, to the red dominant shade we're familiar with today. All concepts -- the two colors, geometric shapes, and gradient-like work -- are extremely innovative in the world of college football.  Most universities go with a standard primary or secondary color and team font.

You'll also note that the yard-line numbers have been changed to match the numbers on the uniforms. Quite the difference from this: 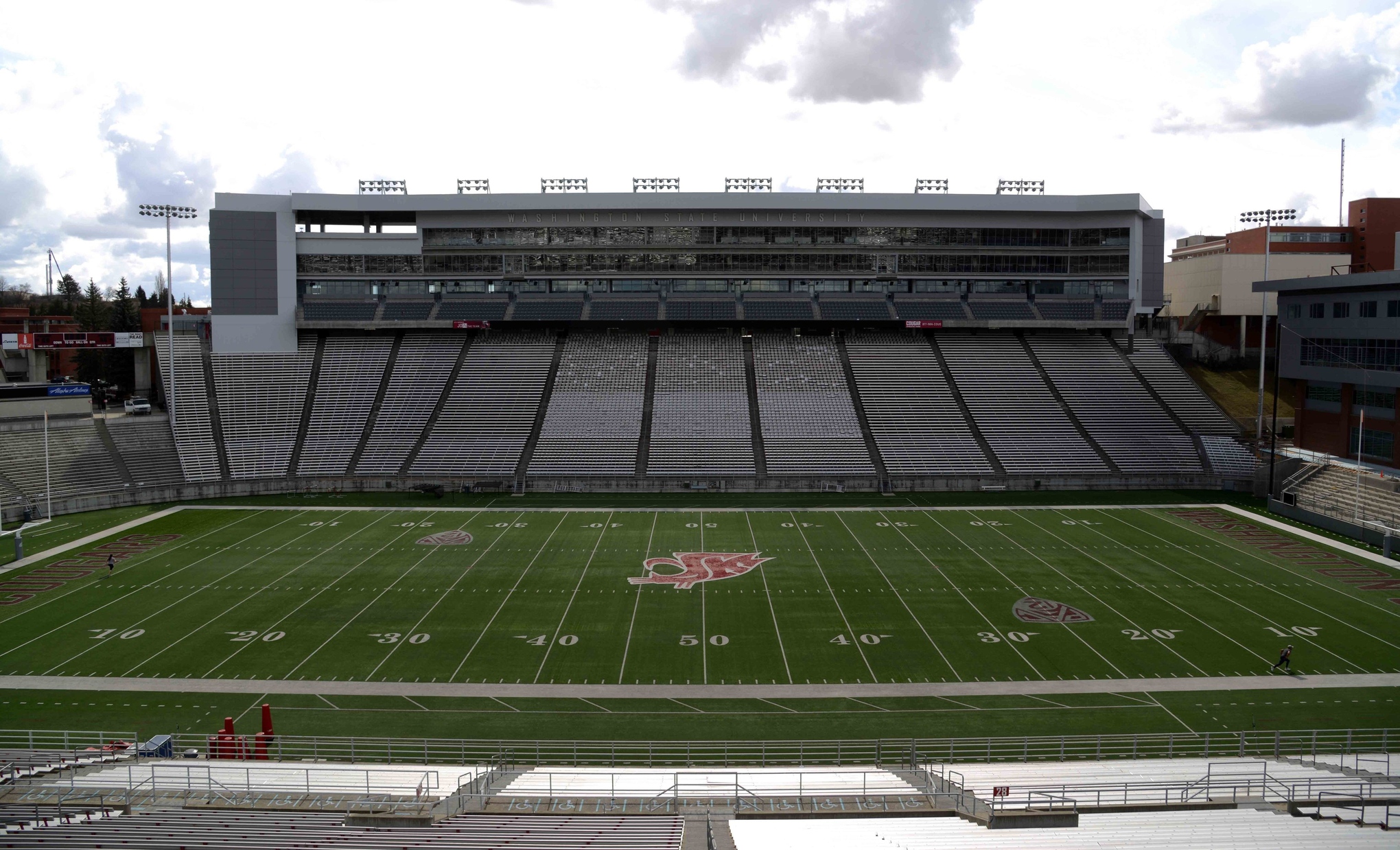 Moos has often talked about creating a unique national identity, one that college football fans can recognize as distinctly Wazzu. This move certainly takes steps toward that aim.  I can't think of another team that has two different colors for their end zones, a field adornment that is typically utilized for the Rose Bowl. (Foreshadowing?)

WSU was the first major college program to use two different colored helmets, and now they'll apparently be one of the first to utilize two different colored end zones. (LSU has been doing it for some time.) I'd expect the concrete barricade surrounding the Martin playing surface to get a fresh coat of paint, littered with WSU branding that hopefully ties the whole concept together.

Side note; Wazzu was the second (then) Division-1 school to install FieldTurf; only Nebraska had it when WSU laid it down in 2000. Might the Cougs might be on the leading edge of another field trend with these end zones?

I think this has the potential to look really cool.

What do you all think?