Today, WSU takes the podium at Paramount Studios in LA. Press Conferences with Leach are rarely boring, but just to make it a little more fun, we put together a little game of bingo to help you follow along.

There are only 36 days until Cougar Football and you can tell it's getting close because it's finally time for Pac-12 media day. It's the two days of the years where coaches and players are forced to dress semi-decently, go somewhere most likely pretty far away from home and answer questions they've heard dozens of times before.

Mike Leach, Connor Halliday and Darryl Monroe will head to Paramount Studios in (my new home town of) Los Angeles, CA. They're set to take the stage at 12:50 but the event starts at 9:35. You can see the full schedule on the Pac-12 website here. You can also watch it on that website (even without a cable subscription!), on the Pac-12 Network on TV or on the Pac-12 mobile app (with a participating cable subscription).

Of course, we'll also be covering all the pertinent WSU info on CougCenter, as always. If you just can't wait, here is our look at what to expect from media day 2014.

Now, whenever Mike Leach takes the stage in front of the members of the media we can expect a quotable and fun experience. We here at CougCenter like fun. So, in order to improve your experience, I put together a little BINGO board to help you follow along. Print it out and check off the boxes as you watch the Cougs take the stage. Make sure to play along in the comments on our media day thread and, together, we will see if we can come out victorious. 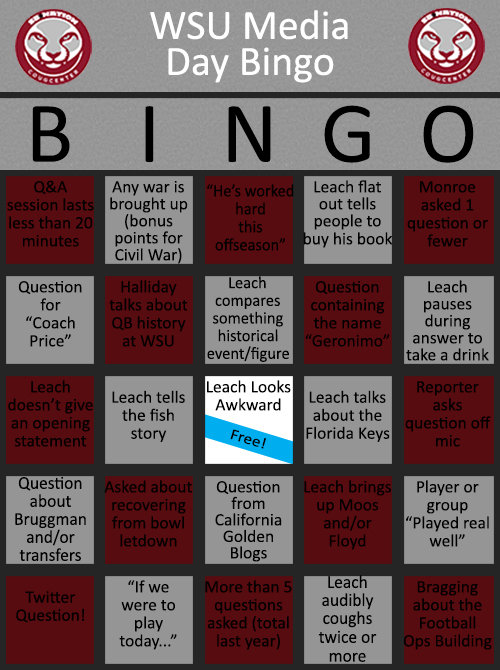 Vince Marotta's 2014 Pac-12 Preview: Oregon Ducks back on top ArizonaSports.com
3. Washington State Cougars (7-5, 5-4) - The Cougs haven't had a winning season since 2003 under then first-year head coach Bill Doba. Last season, they were one epic collapse in the New Mexico Bowl from breaking that string. This is the year it happens.

It's not too long now - SportsLink - Spokesman.com - July 22, 2014
A GRIP ON SPORTS As July winds down, the summer doldrums in the sports world begin to ease up. The wind beneath our sails? College football season. Read on.