The Monday After: WSU vs. Portland State demolition edition

The Cougars did what they were supposed to do against the Vikings. I'm not sure how much we learned, though.

Share All sharing options for: The Monday After: WSU vs. Portland State demolition edition

Like a lot of you, I wasn't exactly on pins and needles all day on Saturday waiting for WSU and Portland State to kick off. I actually spent my day on the Columbia River fishing for salmon and steelhead knowing it was unlikely I wouldn't make it home by 5 p.m. (I reeled in a nice silver, by the way.)

The lack of anticipation wasn't just that I expected a blowout victory; it also was that I didn't expect to learn a whole lot from how the Cougars played.

Maybe it was just confirmation bias, but after pan-frying a nice steelhead (my father in law shared his catch) and then sitting down with my DVR remote to quickly make my way through the game, I can honestly say that I didn't really see anything in there that led me to think this team has made big strides to shore up the issues that plagued them through the first two games.

Remember that whole thing about luck last week? The Cougars still made plenty of mistakes against PSU -- dropping passes, missing tackles, blowing coverages, tossing interceptions -- and it made no difference. That is exactly what it looks like when luck doesn't matter because the talent gap is just that big.

We take a look at the upgrades both big and small that have been made to the facility.

Sleep-deprived thoughts on the PSU victory

When you're stuck in another city, connecting with Cougs for the game is one the greatest gifts you can receive.

Of course, the talent gap isn't going to be that large in any game going forward, and with the season at the quarter pole (seriously, it's amazing how fast it goes), I think it's now safe to start drawing some general conclusions about the team that will serve as the basis for analysis going forward.*

*Subject to change, because college football y'all.

It's unlikely the offense is going to be the juggernaut we hoped for. For a unit that brought basically everyone back this season to be struggling so much with consistency tells me the unit probably isn't going to live up to our lofty expectations. With a third-year quarterback and every receiver returning, these guys really should have hit the ground running.

Instead, we got a 13-point turd sandwiched in between a pair of performances where the final point total masked some issues that likely will be exposed against better competition.

In particular, Connor Halliday looks like more or less the same guy. He might be incrementally improved in terms of delivering the ball where it needs to go -- that's a topic better suited for football people who are smarter than me -- but he still appears to get rattled, still appears to try and do to much, still tries to force the ball to places it doesn't need to go.

We just haven't seen an appreciable drop in the questionable decisions -- against defenses clearly inferior to what he'll face in the Pac-12 -- and that leads me to believe that Halliday just isn't going to be able to carry this team the way I hoped.

The secondary is probably going to be as big of a problem as we feared. With so many new players being broken in, I was willing to go a few games before rendering a judgment on the back four. It's not good that there still were so many struggles against a team lacking explosive players such as Portland State.

Overall, PSU completed more than 60 percent of its passes, and although the Cougars held the Vikings to a low yards per attempt (5.3), that figure jumps to 6.8 if the first pass is completed and taken to the house - as it should have been.

Part of the high completion is that WSU seemed content to make Portland State work the ball down the field while preventing the big play. That's a sound strategy when your opponent lacks a certain amount of skill. Marcus Mariota, Sean Mannion, etc. don't lack that kind of skill, and it's scary that "keep everything in front of you" ended up becoming the game plan against an FCS school not named Eastern Washington.

They're still incredibly young, so maybe the improvement will be exponential through the rest of the season as things begin to click. But I think we probably have to accept the idea that it's probably going to be linear with a small slope instead.

Running the ball effectively probably is a pipe dream. Three opponents of varying size and skill up front, three poor efforts running the ball. As Mark noted in the trivia this morning, it wasn't for lack of trying -- WSU running backs ran the ball 22 times, with mediocre results (88 yards, 4.0 ypc). Oregon State's running backs were over 200 yards on 32 carries against these guys.

To my eyes, it looks like the linemen don't get where they need to go quickly enough, and so when they get there, their pads often aren't low enough to get a good push. This also is to say nothing of the issues they often have in pass blocking.

Again, these guys are super young, so I'm not going to kill them here. Youth is what it is, and maybe these guys will have some exponential improvement. But like the secondary, I'm just not holding my breath, even though I'm still hoping.

Domination is measured in explosive plays, and you're going to need a lot of them if you're going to rack up a school-record 706 yards of offense, as the Cougars did on Saturday. WSU averaged 9.8 yards per passing attempt, which set a new high-water mark for YPA in the Mike Leach era, surpassing the 9.5 put up against Rutgers. Passing plays of 84, 67, 55 and 53 yards helped that out, as did the 25(!) completions that went for double-digit gains.

This is what the Air Raid is supposed to look like. Regardless of whether it's sustainable against someone like, say, the Oregon Ducks, it sure was fun to watch on Saturday.

I guess I covered everything above. Same stuff. No need to say any more. 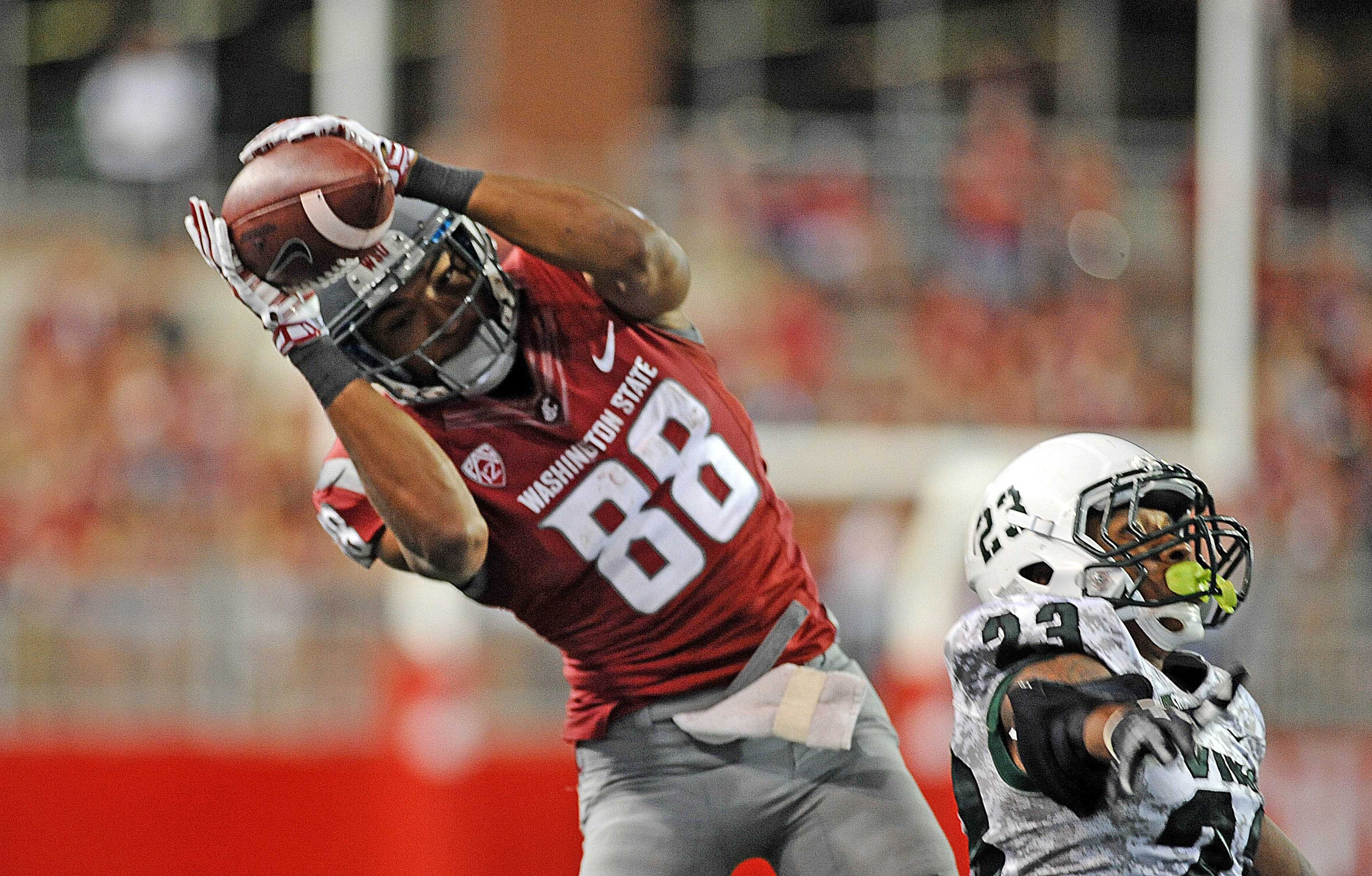 Isiah Myers has been simply incredible this year at the Z. A lot of fans were befuddled at how former four-star recruit Gabe Marks could be headed for a redshirt year; now you know why.

Myers will never make your jaw drop with his athleticism the way Vince Mayle or Dom Williams do; instead he simply finds open space with his routes, catches everything thrown at him and runs with the dogged determination of a guy who's still trying to prove to everyone that he's not a two-star recruit.

He now leads the team in receptions, yards and touchdowns.

I honestly don't know what the solution is at Mike, but Darryl Monroe continues to be awful. He just looks completely lost, finishing with just one -- ONE! -- solo tackle from the spot on the field that should be getting a ton of them.

That said, I don't know how seriously the coaching staff is looking at a change. Monroe played until Quentin Breshears' field goal made it 45-21 with 11 minutes to go in the game, at which time he was replaced by his backup, redshirt freshman Peyton Pelluer.

For what it's worth, Pelluer had two solo tackles in the final 10 minutes of the game.

The Oregon Ducks are coming to Pullman, and they're going to bring quite the reputation with them.

After a slight dip last season -- 11-2 qualifies as a "dip" for them, right? -- the Ducks are right back on the butt kicking trail. They've scored no less than 46 points in any of their games, and that includes a much-hyped matchup with that stout Michigan State defense.

The Ducks and Spartans traded blows in a close first half, but then -- stop me if you've heard this before -- Oregon ran away from them in the second half, outscoring Michigan State 28-3 in the second half to cruise to a 19-point victory.

Marcus Mariota is making an early case for the Heisman Trophy, putting up 321 all-purpose yards per game. He's averaging an absurd 11.4 yards per passing attempt on just 71 attempts. That's 71 attempts in three games. Connor Halliday probably will throw more passes than that himself on Saturday.

If you're looking for a weakness, the Ducks' pass defense has been so-so. The problem for the Cougs, of course, is that it hasn't even remotely mattered yet.