What did everyone think of Martin Stadium now that all the bells and whistles are here?

Share All sharing options for: The New Martin Stadium - REVIEWED

WSU opened up their Pullman schedule with a big win Saturday.  While we've devoted plenty of space to the predicted thrashing of a FCS opponent, this section is purely about what you thought of WSU's first foray into the gameday experience for 2014.

Like many of you, I took the FOB tour before the game (available four hours before each kickoff to CAF members), and came away very impressed.  I'll show you a few things we were able to snark on while walking through the building, but overall came away agreeing with Bill Moos and Mike Leach that the building is among the best in the country and you'd be hard pressed to find one that is demonstrably better than ours.

The first thing you are greeted with upon entry is the empty Apple Cup trophy case.  While I can understand why this would be a point of pride if the Apple Cup were actually in our possession, it does a pretty good job of highlighting the program's historical failures when it remains empty.  And it more or less cements the idea that Cougars are obsessed with Washington more than they are anything else.  The statewide victory lap tour for a 3-9 team in 2012 was our previous best example, but now we have it in writing.

Troy Bienemann has a bigger photo than Ryan Leaf in here

I didn't take a ton of pictures of the Cougar Hall of Fame, because you've probably seen most of them from the press when the FOB initially opened up.  I was pretty surprised at the lack of attention to the best quarterback in program history, though.  I don't know if it's because of his post-college flameout or subsequent arrests, but it seemed odd that they list a long list of Alex Brink's accomplishments, but the next photo over just says "Ryan Leaf: 1994-97."    We should rectify this.

This was the funniest thing I saw in the building.  The only thing that would've made it better is if it said "2nd Place"

From there, we went down to the weight room.  Words really don't put to justice how giant this room is.  And it really seemed like each station had some next-level lifting technology I didn't know existed yet.  Look at this treadmill!

Also, it appears football players are pretty strong.  The whole room is littered with 120 lb dumbbells. 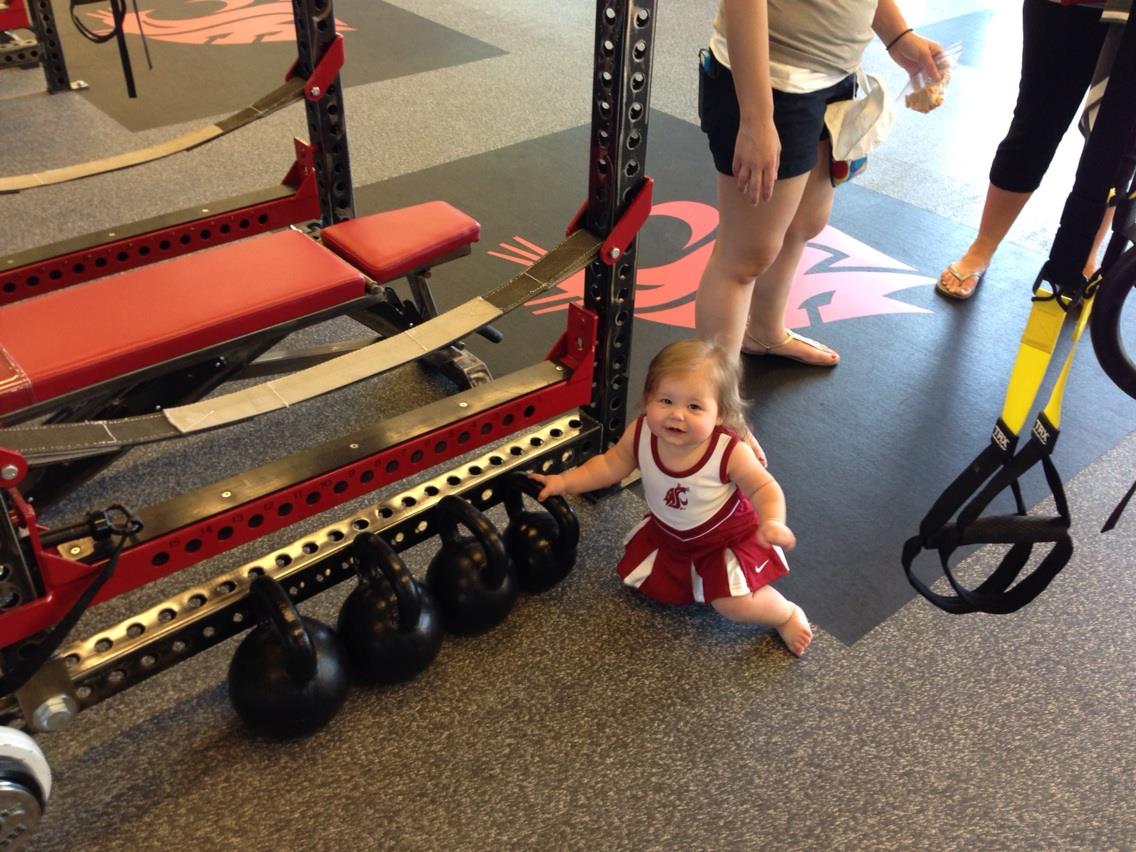 After getting our lift in, we headed up to the classroom/breakout room floor.  The Offensive/Defensive Line Rooms are impeccable and rival most of the NFL rooms you see on TV.

Just in time for the 1:30 showing of Road House. pic.twitter.com/BF29LRcuhC

Then we went and saw some of the other breakout rooms and found out where we saved some money.  I'm pretty sure they just grabbed this furniture from the 3rd floor of Todd Hall and called it good.  If you wonder why we miss out on a Running Back recruit in the future, think of this room.

This is why we can't keep running backs. pic.twitter.com/ZCM6dWBYoK

After that, we headed up to the 5th floor to see the coaches offices.  Mike Leach really hasn't moved into his office very much.  It's incredibly empty, which is surprising considering the stories of all the trinkets that adorned his office in Lubbock.   Also, this happened:

Somehow, upon trying to leave, the elevator took us to the forbidden 1st floor, which is where the locker room is located.  Being of the mindset that it's easier to ask for forgiveness than permission, we took advantage of the opportunity.  Our friend Mike who used to be an equipment manager went to find his former boss, who showed us around the equipment room.  Mike did seem somewhat disappointed the current equipment managers did not pay him the reverence he felt he deserved, but we thanked him for getting us in the room.

The equipment is all kept in library-type stacks, each stack representing different sets of gear.  I wasn't supposed to turn the gear.  I turned the gear anyway.

Snuck past some folks and got into the equipment room. pic.twitter.com/V8EpjwmPH1

Apparently they keep him in a box. pic.twitter.com/8JWFrdUiOk

Just sitting on a table in the equipment room.  That was the running joke of the afternoon.

If you had any doubt if D1 athletes get halftime orange slices and Capri Suns, you have your answer. pic.twitter.com/GSSY4xX45Z

The other thing that made me laugh for the rest of the day was the pile of halftime snacks available outside the locker room.  Orange slices and juice boxes for everyone!  (note: I'll apologize in advance if this starts an impermissible benefits investigation by the conference.)

Walking into the stadium for the first time since all the improvements, this is the first thing that stood out:

Over the summer, I was incredibly neutral about end zone shading.  I really didn't care what they looked like, as long as our team could find them.  I was wrong.  These are perfect and I didn't know how much I wanted them until I saw them.  They are simply stunning in person (although that might be the new turf, too, but still...)

The brick façade that now encircles the stadium was nice, although my seats are high up enough that I don't really notice it.  I'm sure it looked good on TV.  As a south-side seat holder, I appreciated the new video ribbon that runs along the north sideline.  My only complaint was the ads.  I am not offended by advertisements and recognize the necessity of them.  I just felt the video board was nothing but Les Schwab and Mc Donald's spots and nary a football statistic to be found.   Also, if anyone at IMG is reading this, those white advertisements on the ribbon are blinding the entire south sideline.  I can't imagine it's great for the players.

Oh, and the Dancing Football is back.  Give whoever was in charge of that a raise.  A big one.

What else did other people see at the game?  I've heard grumbling from north-enders that the student ticketing fiasco that kept kids from getting to their seats until the 2nd quarter is still an issue, but didn't see it first hand.   Also, this may just be me getting old, but that No Flex Zone song that kept getting played through the PA system is simply terrible.  GET BETTER MUSIC WHILE YOU'RE GETTING OFF MY LAWN, KIDS!  Also, if one of you could explain the benefits of sitting in the Crimzone, we'd all love to hear them.

Let us know what you thought of NEW Martin Stadium in the comments!