WSU vs Oregon: Can the Cougars exploit the Ducks' secondary?

The Ducks are supremely talented, but Washington State may find some success throwing the ball.

Share All sharing options for: WSU vs Oregon: Can the Cougars exploit the Ducks' secondary?

The Oregon Ducks are really good. They are ubiquitous in College Football Playoff predictions and you don't accidentally get ranked No. 2 in the nation during the season. They have a legitimate Heisman candidate in Marcus Mariota who's ruthlessly efficient in the pass game - ranking second at 197.74 per KnowHuddle.com - and expertly deploys the Duck run game troika of Thomas Tyner, Byron Marshall, and Royce Freeman, who some are calling "Run-TMFree" (there's really nothing to dislike about that, solid nicknaming).

Oregon scores a touchdown every 10.3 offensive plays and picks up 8.3 yards every snap. That breaks down to 14.79 yards every pass completion and 6.34 yards every rush attempt. The time between plays averages out to 20.28 seconds, which is like saying the average speed of a Maserati is 40 mph because it's being leisurely driven on country roads. Oregon is much faster than that when it wants to be, and hasn't needed to be past the third quarter very often. The Ducks scored 156 points in three games; 29 in Q1, 57 in Q2, and 35 in both Q3 and Q4. An astounding 48.54 percent of their plays are good for either a first down or touchdown.

Wazzu hasn't exactly been a scoring slouch either, putting up 110 points on the season, and match the best attributes of their offense against Oregon's defensive worst. The Ducks are giving up 275 yards per game through the air (98th) -- WSU ranks first in the nation at 517 passing yards per game. Oregon allows 15.5 passing first downs per game (122nd), 40.5 passing attempts (110th), and 23.5 completions (109th) per game. All numbers that should get significantly inflated after sharing field time with Connor Halliday on Saturday. WSU is ranked either No. 1 or No. nationally in each metric.

Teams have had some success throwing on Oregon.  Teams have also had to play catch-up against Oregon, so your defense is going to see a little more throwing when your offense scores like they do.  And a lot of it looks like first year defensive coordinator Don Pellum has been content to sit deep and keep things in front.

Wyoming and Michigan State both have offenses that favor the run, choosing to run the ball 67 percent of the time on non-standard passing downs and only completing 54 percent of passes on standard passing downs.  The Ducks did show a little susceptibility over the top against Wyoming, which threw two TDs (18 and 12 yards) and completed three pass of more than 20 yards.

Their secondary has yet to be tested like it will in Martin.

Here's some looks they gave Wyoming when the Cowboys lined up in 10 personnel (1 RB, 0 TE) sets. 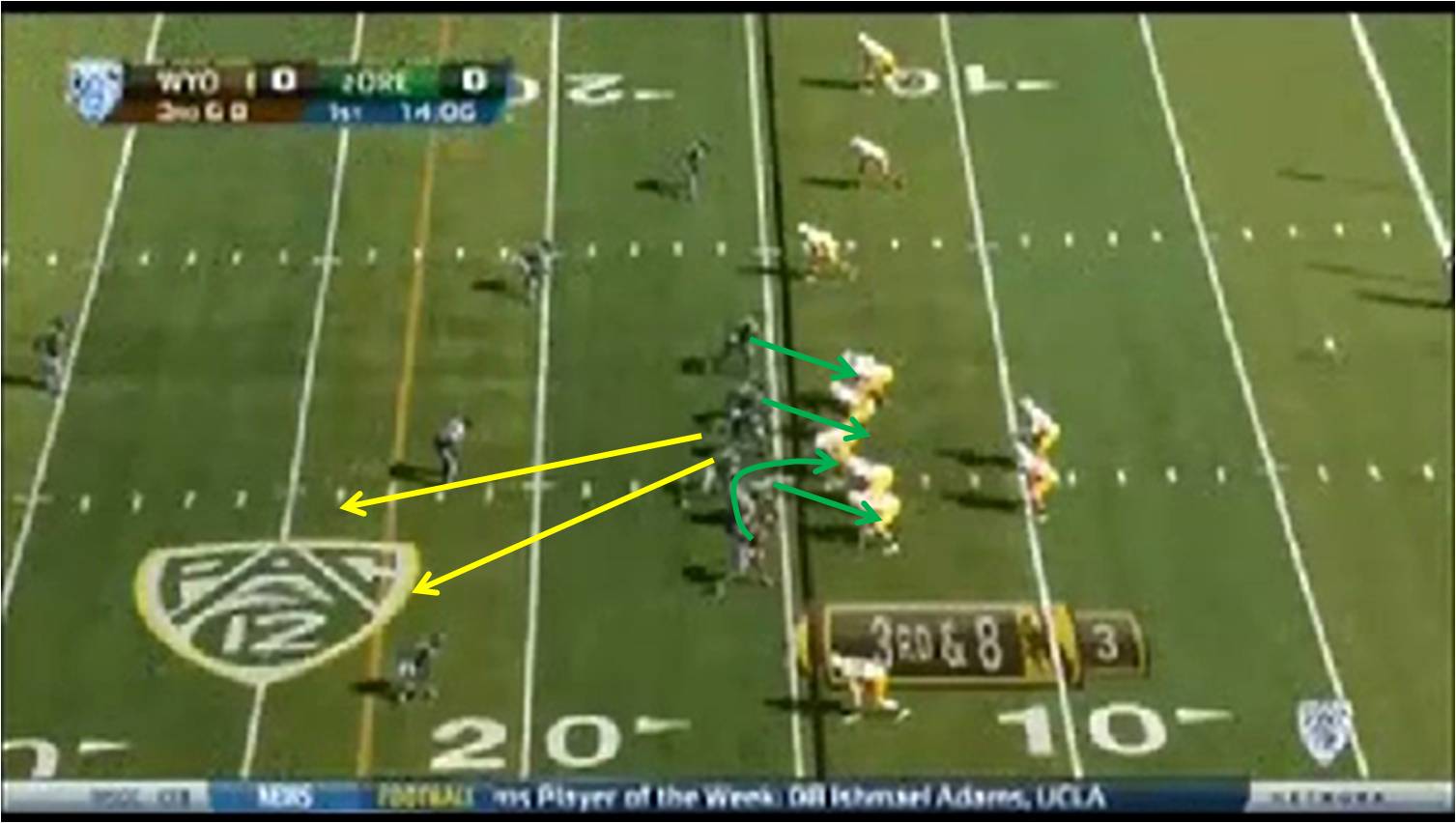 Oregon shows six at the line of scrimmage, looking to blitz the A gap. Wyoming didn't often go to 10 personnel, pretty much exclusively on third down passing situations. In a fairly uncommon technique, the LBs over center drop back into mid-zones toward the boundary, opposite the three WYO receivers who they man-up on the field side. They could have seen a backside post out of the guy at the bottom on film (he burned them with it at another point in the game), or were anticipating some drag routes coming across their face.

You also see their front is pretty active. On this play they twist the DE and DT.  The front isn't a straight bull rush or speed rush type of team, they'll mix in some stunts and move their athletic backers and DBs all over the field to confuse pre-snap reads on coverage.

In one of their more complex shifts, the Ducks initially have five at the line, with two backers showing blitz in the A gap against a four receiver 2 x 2 formation WSU calls "Ace Rip". The Wyoming QB sees two high safeties and what could be man coverage underneath, something Oregon played a lot against Wyoming's 10 personnel, and thinks they have a great play call.

The outside receiver sells a skinny post, and the inside receiver works to the numbers on a wheel. The cross could cause problems for the man coverage and two verticals on a single-high safety to that side is about as good as you could hope for.

Problem is, that's not the coverage Oregon was playing. 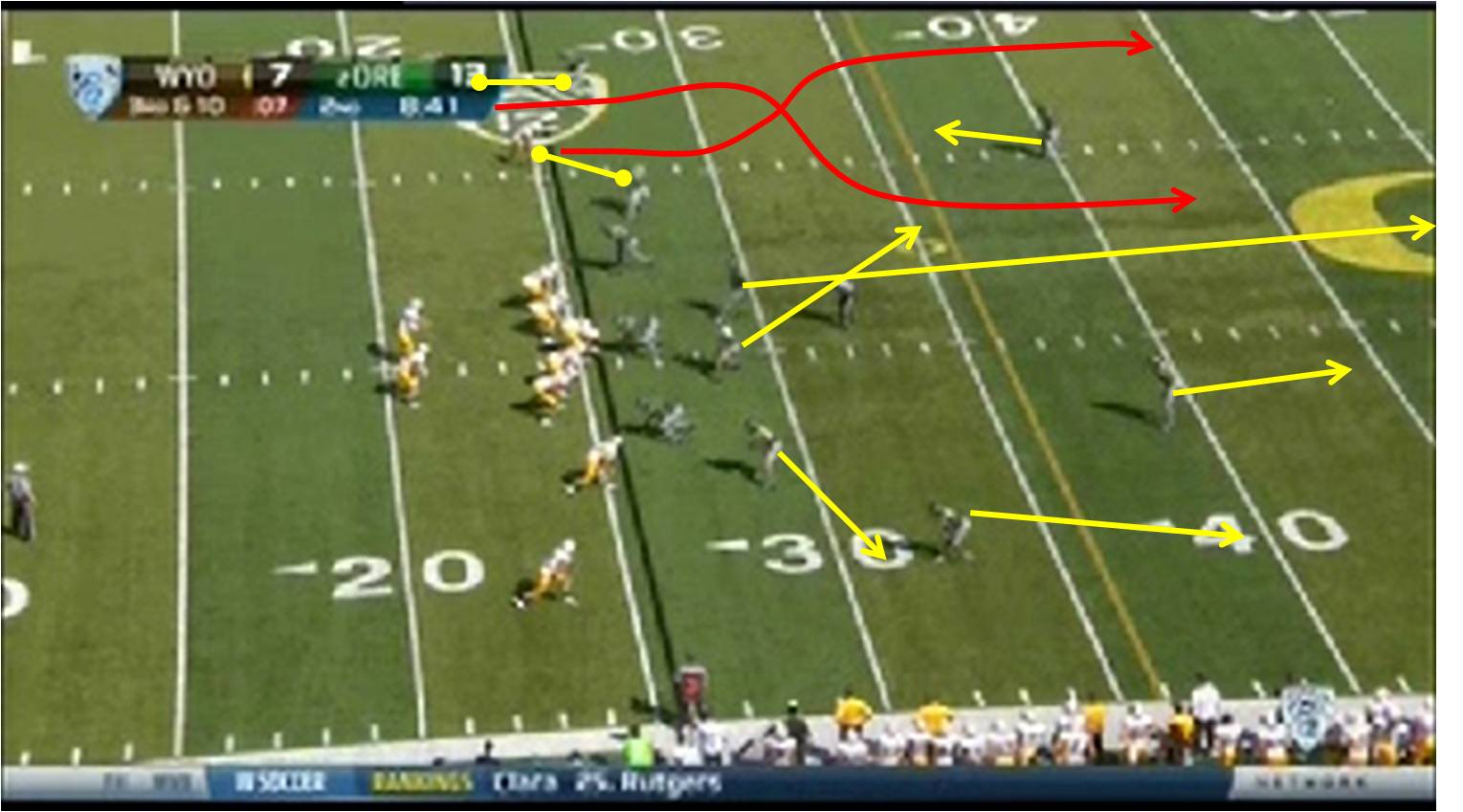 Oregon actually takes the safety they have over center and busts him back about 35 yards to play the deep half.  The DB lined up as a field side safety works inward at the snap, and the other linebacker breaks out to an underneath zone.  The Ducks showed man-under two-free, something they'd been running all game against four receiver sets, and transitioned to a Robber Cover 2 seemingly out of nowhere.

Wyoming had no clue where to go with this ball, and it's hard to hold that against them. When all was said and done; Oregon had covered both receivers to the left and had them bracketed with a safety over top (who was just breathing on the center's face a moment ago) and a Robber jumping the post underneath. The defense got a four-on-two advantage on a play where the Wyoming QB thought he'd have two vertical routes against a single free safety.

Not to mention they got some pressure with three rushers, and hurried the QB just enough to make a bad throw at a bad decision.

The Cougs like going to River Cracraft on third down, mostly with a play called Y-Cross. Six of Cracraft's 19 total targets have come on third down, and all but one of those were in third-and-long (greater than seven yards). He's caught five of those third down targets for 56 yards and four first downs. Only Rickey Galvin has more targets on third down (nine) and he's played an extra game.

If the Cougs find themselves in third-and-long against Oregon, and the Ducks drop into a robber coverage without Halliday being able to read it, one of those Cracraft targets on a Y-Cross is getting caught by a guy in a wrong colored jersey. How they handle Cracraft, with linebackers or safeties, could have a major impact on how well WSU does offensively on Saturday.

Oregon is beatable outside. Despite all their speed and athleticism, when you play man coverage you're vulnerable. 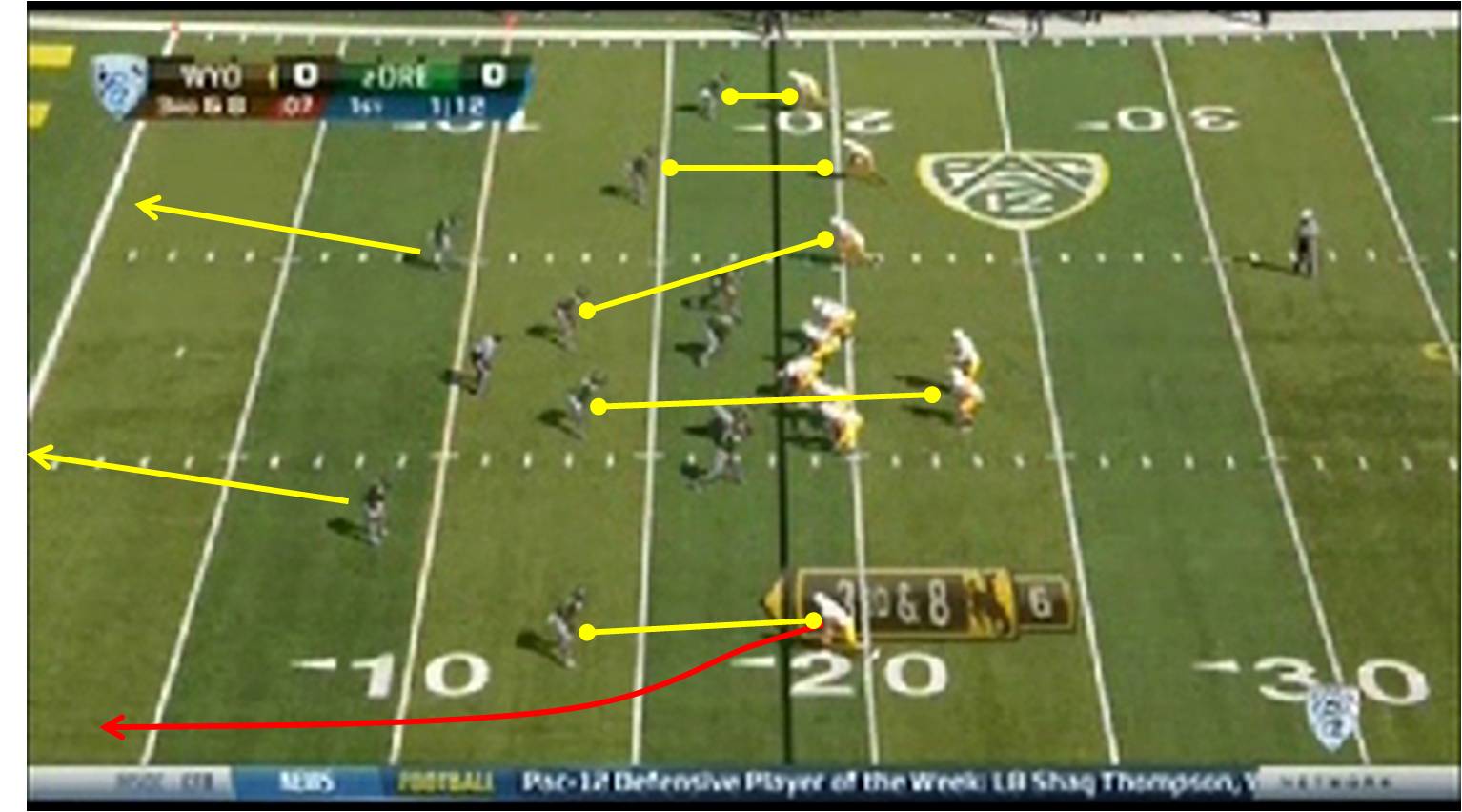 Expect to see this fairly often. Oregon plays with their two free safeties up top and man across the board underneath. Who knows why the boundary safety didn't get off his hash sooner, but WSU has receivers that can really pressure this man coverage.

Once more for good measure.

Here's to hoping the band plays the fight song early and often, cause the Cougs are gonna need all the points they can get.