Connor Halliday is on a record pace

The WSU QB is putting up some eye-popping numbers. But he faces stiff competition from Oregon State's Sean Mannion for the Pac-12 career yardage record.

Share All sharing options for: Connor Halliday is on a record pace

Before we start in with this, let's get something out of the way first: Spare me the speeches about how records don't mean anything if you aren't winning games, how stats are for losers, blah, blah, blah. Because records are cool. And if you don't think so, you know where to click.

We knew that with the number of times WSU would put the ball in the air under Mike Leach, his quarterbacks would certainly rewrite the WSU record book and likely the Pac-12's as well. And it's already begun: In 2013 Connor Halliday set the school single-season records for attempts, completions and yards, and tied Ryan Leaf's records for touchdowns and 300-yard games.

Halliday is likely to break all of those records again this season, and he's also got his sights set on some Pac-12 records. But he's got competition: Oregon State's Sean Mannion.

One of our researchers, Kirt, put together some handy dandy graphs to help you visualize Halliday's pace and where he would finish in terms of some notable single season and career Pac-12 and NCAA records if he continues on his current pace. 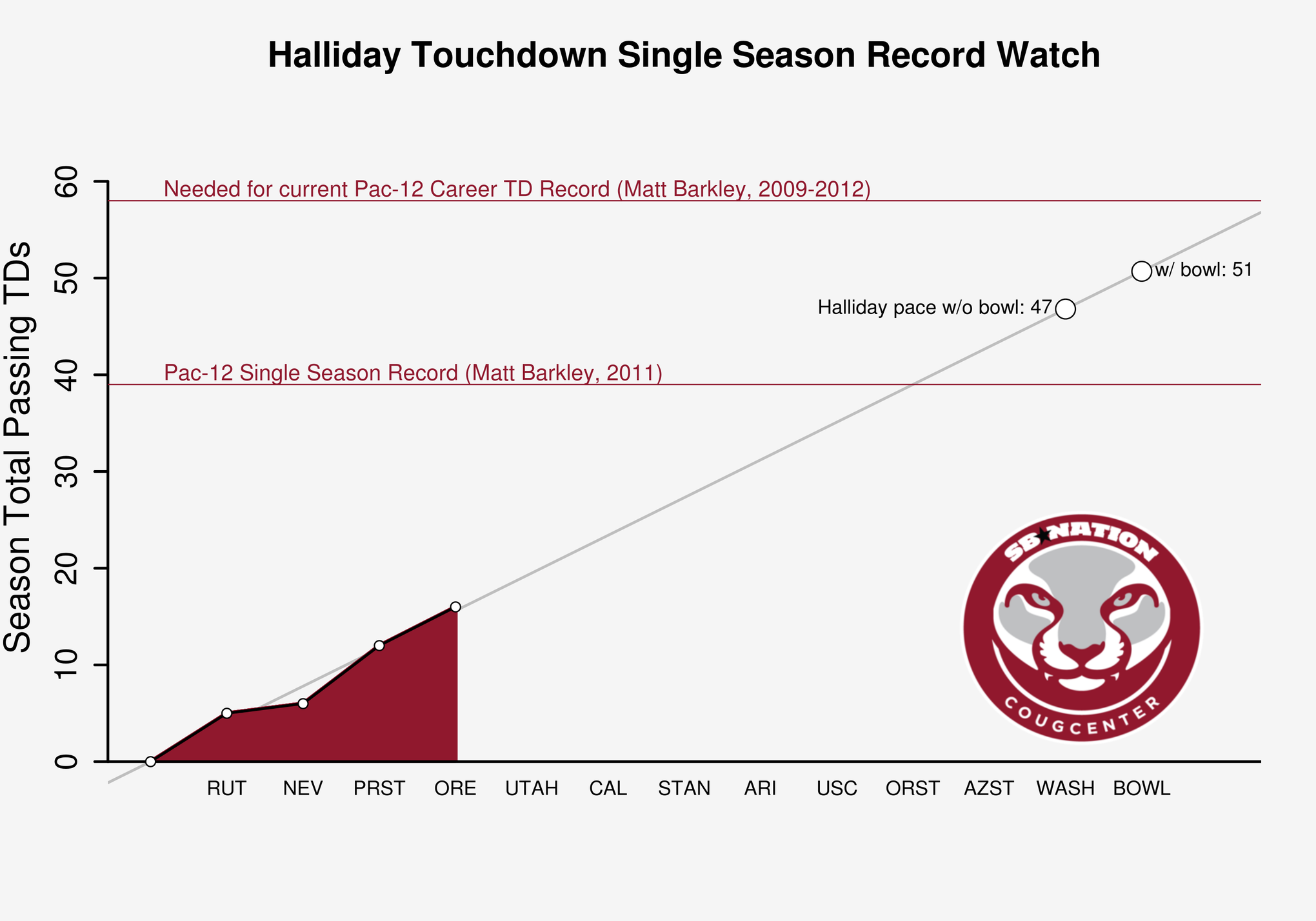 Halliday tied the WSU record last year with 36, and he's on pace to shatter that at the moment. He'd need to throw 58 touchdowns, though, to break Barkley's career record. That one seems safe -- if the Cougars got to a bowl game, Halliday would need to average just a shade under five touchdowns the rest of the way; without the bowl game, it's more than five. He's currently sitting on four a game. 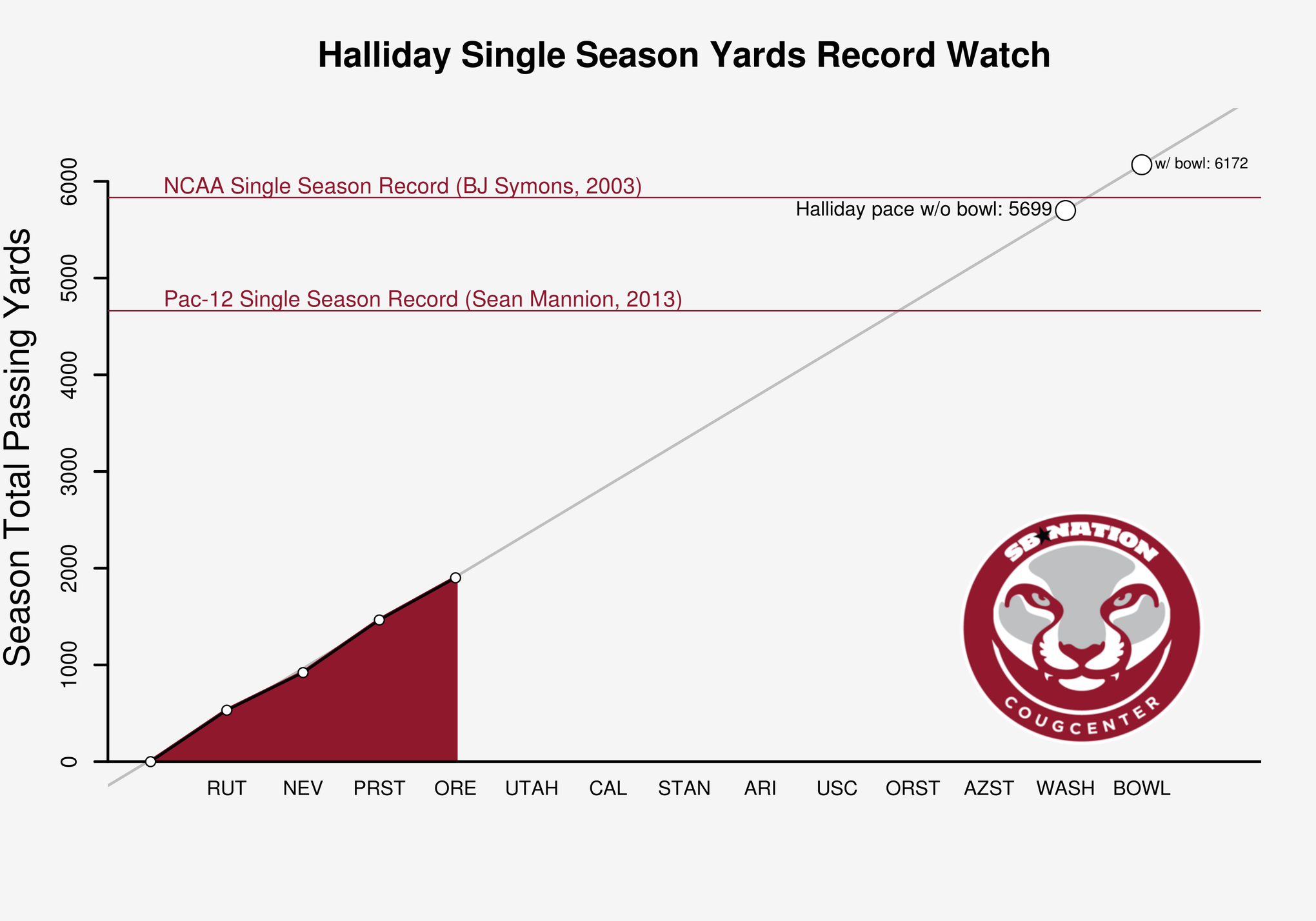 Now we move on to the guy who is going to be Halliday's nemesis in all of this. Sean Mannion set the Pac-12 record for single-season passing yards last year, a mark that Halliday would easily eclipse if he stays on his current pace. Halliday also could threaten the NCAA mark of BJ Symons who, of course, set the mark under Leach at Texas Tech (5,833). 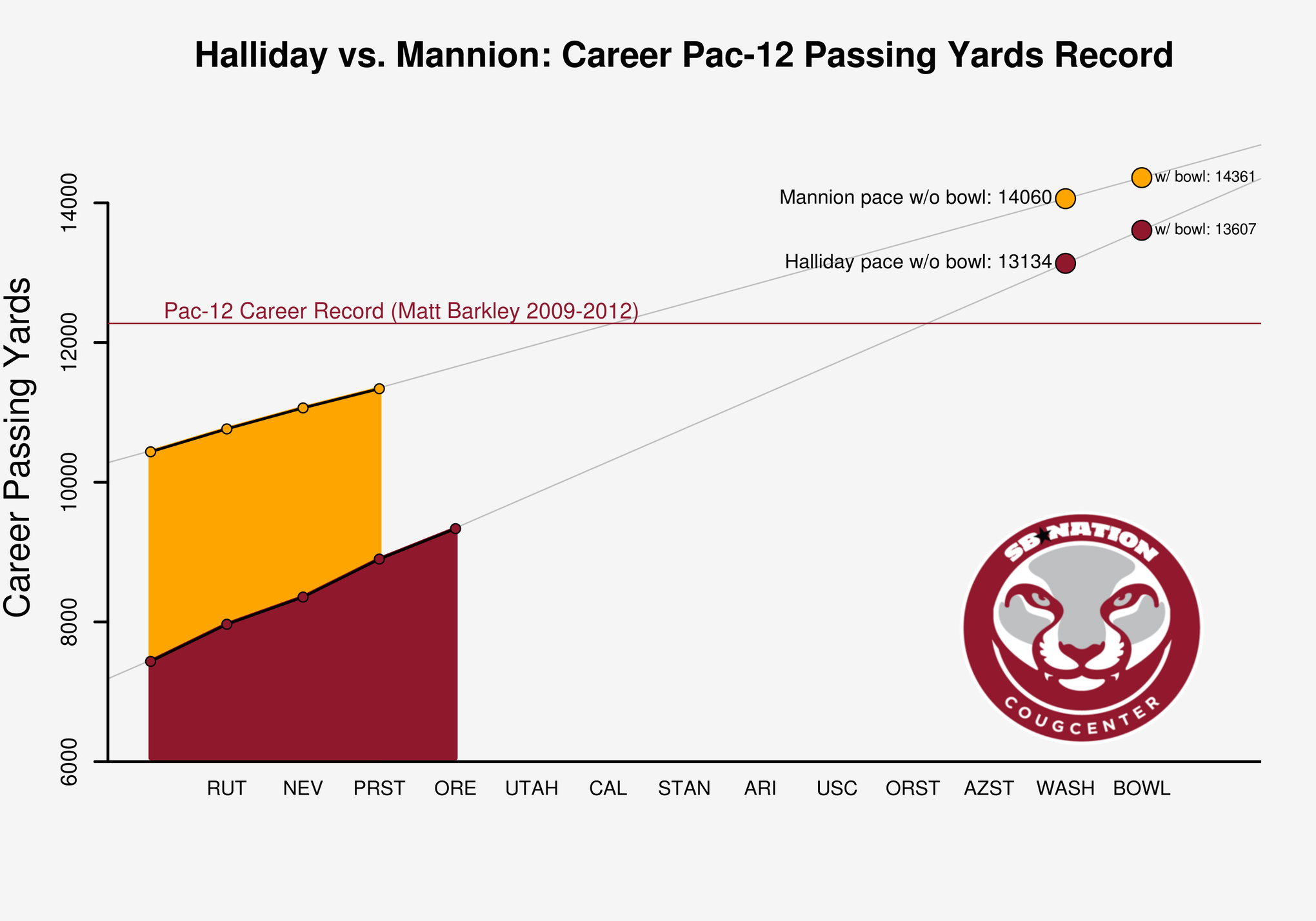 The Pac-12 career passing record is going to be a tough one, though. Halliday is likely to eclipse Barkley's record ... but so is Mannion. And it's going to be really tough for Halliday to catch Mannion, unless the latter suffers some sort of injury. A longshot would involve OSU missing out on a bowl game and WSU making a bowl game.