The Monday After: Ridiculous WSU comeback over Utah edition

Like many of you, I assumed defeat when the deficit reached 21-0. Thank goodness the team is stronger than I am in these situations.

Share All sharing options for: The Monday After: Ridiculous WSU comeback over Utah edition

Can I just tell you how good it feels to say that? There have been times in my life where I've found that particular sentence difficult to utter, but as I write this, I'm so happy. I really just wanted to shout it from a mountain, but I don't have a mountain, I have a website.

So I'm just going to write about it instead.

First, I was wrong about this -- sent out shortly after Utah's Devontae Booker scored on a 76-yard run to put Utah up 21-0 with less than 10 minutes elapsed:

Good night folks. This game is already over. Sigh.

See, here's the great thing about being a fan: We can say stupid stuff and it has zero impact on the team, which clearly believed it could right a ship that was taking on water by the gallon. And thank goodness they did.

As I mentioned yesterday, I didn't doubt that the Cougars would fight until the end; we've seen their resiliency already this year, having come back from a 21-10 deficit to take the lead on Rutgers and twice scoring touchdowns to tie No. 2 Oregon. But spotting a decent team three touchdowns? That was going to take some kind of incredible defensive performance the rest of the way -- something like allowing just 10 points -- for the offense to really have a chance to make up that kind of gap in those kinds of weather conditions.

As it turned out, the defense would give up just six points the rest of the way. Which brings me to my second mea culpa.

I was wrong about the defense, too!

This one goes a little farther back. In this same space about a month ago, I lamented the state of the defense, even going so far as to wonder if it was time to move on from Mike Breske. I'd seen one too many flat performances from the defense for my liking, which gave me little hope this was set to turn around.

One of my key complaints was that the defense appeared to be talent deficient, despite three solid recruiting classes; fifth-year senior Tracy Clark (who had never before sniffed the field) started at one corner against Rutgers, running back-turned-safety Teondray Caldwell started at one safety, and Taylor Taliulu -- benched midway through each of the past two seasons -- started at the other safety. Was there nobody better on the roster?

Turns out, there were better guys on the roster. Four of them, in fact, and I don't think it's anything near a coincidence that the defense has improved dramatically with the insertion of redshirt freshman Charleston White, redshirt freshman Darius Lemora, true freshman Sulaiman Hameed and junior Jeremiah Allison. All four are exponentially more athletic than the guys they replaced, and all have proven themselves to be up to the steep learning curve.

They haven't been perfect. But goodness if their athleticism hasn't allowed them to overcome a lot of that and make a lot of plays that simply weren't being made before.

The other difference is the play of the front seven. Here's how the Cougs have performed against the run this season:

If you looked at this and though, "actually, that doesn't look that great," I'd concur. I want to show you another table, though. This is the same table with each opponent's longest run removed. I'll explain why I think this is significant on the other side:

First things first: I know I run the risk of being accused of rigging the numbers in this kind of analysis, but hear me out. Yes, those five rushes happened. Yes, they most definitely count in the final totals, and - most importantly - they definitely impacted the outcomes of a few of these games.

But if we're interested in the process (and I am, because that's what's predictive), it's worthwhile to note that in three of the five games, the opponent has been completely ineffective running the ball outside of just that one play, and in one of the remaining two games, the the opponent was merely OK rushing the ball. (Bet you didn't realize that with Rutgers. I know I didn't.)

That is a hugely positive development and actually quite a relief; we all presumed the front seven would be a strength this year, and that's certainly shaping up to be the case. This game, in particular, might have been the front's best performance to date -- Utah places its identity in being physical at the line of scrimmage, and the Cougars flat whipped them. The Utes were content to park the bus for the majority of the game with conservative play calling, and those guys consistently stood tall against a team that was purposing to run in order to make its lead stand up. I just can't say enough about the job that Cooper and Toni Pole and Darryl Paulo and Kache Palacio and Ivan McLennan and Darryl Monroe and Allison and Cyrus Coen did.

Once this defense shores up its propensity to give up an explosive play -- and that is most definitely something that is correctable, as you'll see when Brian Anderson tackles that long run in a post this week -- watch out. The talent is most definitely there for this to evolve into a top half of the conference unit ... if it's not already there.

I couldn't be happier to have been wrong. Sorry, Mike.*

*Although I do still wonder why you played the guys you did against Rutgers ....

It wasn't all bad for me on the conclusion/prediction front. I like the way the team made me look like I know what I'm talking about with the way they outplayed the Utes for the vast majority of this game. I left a couple of comments last week suggesting that I wasn't overly impressed with Michigan in the leadup to the game, and I expounded a bit on Twitter just before kickoff.

I've been saying all week that I didn't see anything in Utah's win over Michigan that scared me. And ... well: http://t.co/DBZ0fSdcD0

I'll say it again: It was a win built on Michigan's turnovers, a punt return TD and one good offensive drive. Not very predictive.

The Utes do not have more talent than WSU, particularly on offense. Clean special teams, sound in the back 4 and WSU can win.

Of course, that final tweet was looking pretty fateful about 30 minutes after kickoff. But in the end, I think it was undeniable that, yes, the Cougars have more talent on offense than Utah, and that clean special teams combined with being sound in the back would severely hamper the Utes' ability to score. As with Michigan, Utah's ability to score was largely reliant on its opponent making mistakes.

And once the Cougars stopped making those mistakes, it was obvious that, yes, people were putting waaaaaaaaay too much stock in that weird victory over Michigan. Final count: 5.8 yards per play for WSU, 4.5 yards per play for Utah. It was the fourth time in five games that WSU posted a superior yards per play.

Honorable mention: The offensive line (we'll have more on these guys later in the week), the pass rush.

There are still way, waaaaaaaaay too many problems in the special teams: Missed field goals, fumbled punts, punts fielded at the 5-yard-line, butchering punt coverage ... we've seen just about everything at this point other than blown kickoff coverage or blocked punt.

Kickers missing field goals is whatever -- that's a talent issue, one the staff thought they had rectified until their kicker commit flipped to UW just before signing day -- but the other stuff is pretty inexcusable. If a pair of punts get fielded against Rutgers and Oregon, who knows if the Cougs figure out ways to win those games.

It's time to get this stuff shored up, especially when Mike Leach likes to make such a big deal out of his starters playing on special teams. They really don't have any excuse. 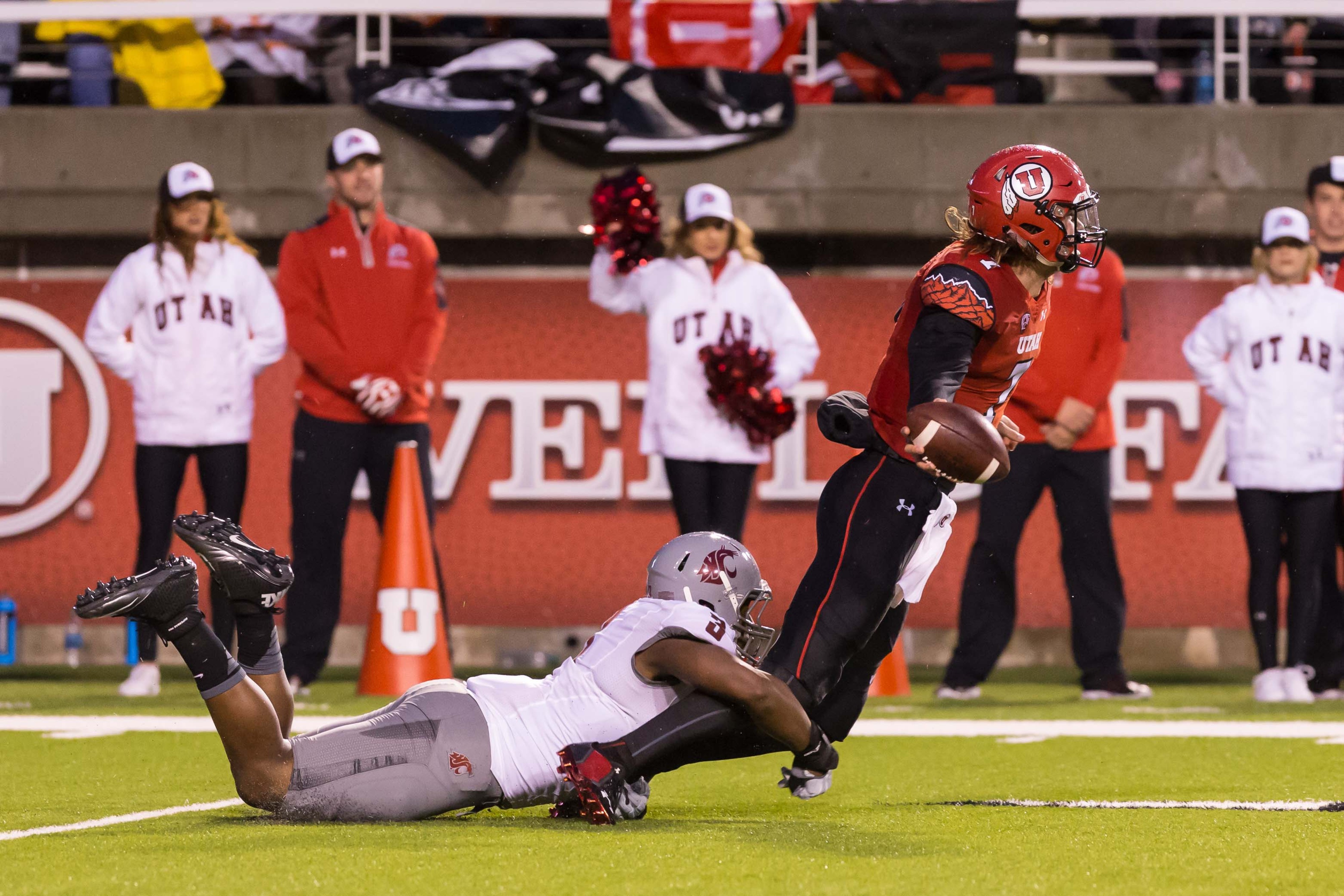 A split second later, Travis Wilson's knee touched the ground for what should have been a sack. Regardless, Ivan McLennan was a terror on Saturday. (Photo: Chris Nicoll-USA TODAY Sports)

The Cougars only picked up one sack, but that belies the work the team was doing to harass Travis Wilson, and a major contributor to that was BUCK linebacker/defensive end Ivan McLennan. He spent most of his day at DE, splitting time with Daryl Paulo, and there were stretches where he was simply unblockable.

You might remember that McLennan was recruited by Oregon out of his junior college. After taking a year to redshirt, we're starting to see that impressive athleticism everyone raves about. He got that one sack, and actually had another where Wilson's knee was down as he was trying to throw it away, but for some unknown reason (lol Pac-12 officials) the play was not reviewed.

The Cougars hadn't had a legitimate pass rush since Travis Long left two years ago, but they now have 12 sacks, tied for 28th nationally. If they can get pressure with four, as they're now occasionally doing, that's really going to help out the secondary.

Nobody. Y'all are my heroes for making my weekend.

California comes to Pullman to take on WSU for homecoming. The Golden Bears are substantially improved on both sides of the ball ... but, of course, so are the Cougars.

It's being billed as the Air Raid of Mike Leach against the "Bear Raid" of former Leach assistant Sonny Dykes, but the whole "Bear Raid" thing is a bit of a misnomer now: After throwing the ball about 60 percent of the time last season, Cal is now running the ball more than it throws. Quarterback Jared Goff seems to like it this way, as he's been able to engineer some big plays through the air.

The results have been spectacular, as the Golden Bears are a crazy hail mary away from being 4-0 after winning just one game all of last season. We'll have more on how the Bears are doing it on both sides of the ball as the week unfolds, but suffice to say: Even though there's a good chance WSU's defense is the best Cal has seen, the Golden Bears aren't just going to roll over so the Cougs can waltz back to .500.

Especially since their defense is giving up a ton of points. Might need a new scoreboard after this one.

WSU vs. Utah: Cougars pull off incredible comeback to win 28-27