Washington State trending up in the advanced stats

The record isn't ideal, but the advanced stats indicate WSU is headed in the right direction.

Share All sharing options for: Washington State trending up in the advanced stats

WSU actually ranks well above its record in Football Outsiders' F/+ ranking and Sports Reference's SRS ranking. The Cougars are No. 40 in F/+, up 19 spots from last year. The current 6.8 percent mark is well above the 3.7 percent F/+ WSU posted last season. The Cougars rank slightly worse in SRS, where they are tied for No. 50 with Nevada. Again, the Cougars look better than they did last season. WSU currently has a 6.57 SRS ranking, compared to a 5.09 SRS last season. It's still early in the season and ultimately wins are the only thing that matters, but WSU is currently a considerably better team this season than it was last year. At least by the measure of advanced stats through four games.

Among the two-win teams of the world, WSU is the sixth best according to SRS. WSU ranks behind West Virginia, Memphis, Texas, Tennessee and Florida. The Cougs are the fourth-best two-win squad according to F/+, trailing WVU, Clemson and the Gators.

Again, in the end only wins matter, but WSU fares very well compared to his Pac-12 counterparts. Here's a complete look at how the Pac-12 teams rank in terms of SRS and F/+. Future WSU opponents are in italics. 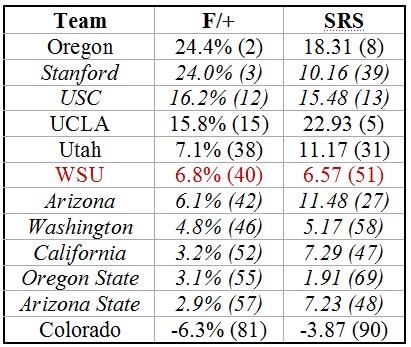 Quite a bit of variation between the two rankings. F/+ is a combination of things and is based heavily on play-by-play and drive data. SRS is all about point differential and strength of schedule. The only thing they can agree on is Colorado is the worst team in the conference. If we believe the F/+ numbers to be true, WSU would actually hold a slight advantage in five of its final seven games.

It may just be small samples sizes and optimism from a 21-point comeback, but WSU might be in better position for a second-half surge to the season that I initially thought.

WSU vs. Utah: Cougars pull off incredible comeback to win 28-27