The Monday After: Exploring luck's role in WSU's 0-2 start

Bad luck is not to blame for WSU's 0-2 start, but bad luck has played a role in it. It never should have been that way. We explore.

Share All sharing options for: The Monday After: Exploring luck's role in WSU's 0-2 start

I'm going to start this piece off with a statement that probably will drive away a not insignificant number of readers. But I guess if I get it out of the way right up top, y'all who hate it can just save yourself the time and move on to something else.

There, I said it. If you think I'm an idiot, or that I'm just one of those statheads who thinks games are played on spreadsheets, the eject button is right ... over ... there.

If you're still with me, you're at least open to the concept. And for that, I commend you, since I think acknowledging luck's existence really makes much more rational sense than denying it, and -- on a personal level -- I can tell you that conceding that some things in sports are just ¯\_(ツ)_/¯ has made living with some unpleasant results a lot easier. (See Bowl, New Mexico.)

Sometimes, though, it really doesn't make the unpleasant results any more palatable. That's where I find myself with these Cougs.

I do believe these Cougs have been a bit unlucky to be 0-2 after these first games. However, I do not think bad luck is to blame for the Cougs being 0-2. I think there's a difference, and that's what I'm hoping to explore here.

Where we spin ourselves around in circles to try and make some sense out this 0-2 start.

The youth movement is in full swing.

I know not everyone agrees that luck has played a role in the outcomes of these two games, instead seeing some sort of systemic failure that will continue to cripple the team. How else to explain those who have already given up on the season?

But is it really that hard to imagine a reality where River Cracraft holds onto that punt -- or where one of the two WSU players around the ball recover the fumble -- and WSU goes on to beat Rutgers in spite of an awful defensive performance?

Against Nevada, is it really that hard to imagine the referee holding onto his flag on that bogus pass interference call, and the referee not picking up the flag on that bogus non-PI/defensive holding call, and a committed kicker signing with WSU instead of UW and nailing a couple of field goals because he's presumably better than the two walk-ons currently on the roster ... and having those things add up to a narrow WSU victory?

If you are having a hard time imagining those things, here's a reality check: The biggest predictor of wins and losses in college football is yards per play. WSU outgained Rutgers 7.7-7.1 and outgained Nevada 5.7-4.2. This team is hardly broken, as many are suggesting. The first margin would suggest probable victory, while the second margin should signify a healthy victory.

If neither of those things happened, it makes sense to try and parse out just what went into the negative outcome, right?

Against Nevada, the reasons for failure to win were two: Turnovers and extraordinarily ill-timed penalties. Sure, the first interception wasn't bad luck, but this guy says those sorts of interceptions just sometimes happen, so I'm inclined to just roll with it. The second turnover, though? Rickey Galvin could have (should have?) caught it. Or, he could have never touched it and the ball sails out of bounds. Or, the ball could have floated harmlessly to the turf even after being tipped. Instead, it landed in someone's hands.

On the flip side, I already talked on Saturday about how WSU has probably been a little unlucky to not have generated more turnovers to this point.

And the penalties ... yes, there were too many, but the timing of them was especially horrendous, which I tend to chalk up to bad fortune. I mean, do people actually believe these guys simply choked in the red zone? After flawlessly converting their last four red zone trips into touchdowns against Rutgers with the exact same young line? They committed just one more penalty against Nevada than thy did against Rutgers, yet nobody was lamenting the penalties against the Scarlet Knights as a primary driver of the loss.

Now, I'm not throwing my hands up, yelling "WELP!" and saying WSU was just unlucky to lose. That would be stupid.

Personally, rather than thinking their buttholes just started puckering out of nowhere, it seems to me that it makes a heck of a lot more sense to just say, "Well that was unlucky that they committed those particular penalties at those particular moments." Because when you put these two games side by side, there's really no rhyme or reason to any of it, no consistency to the issues ... other than loss-loss.

Now, I'm not throwing my hands up, yelling "WELP!" and saying WSU was just unlucky to lose. That would be stupid, as it would ignore that there are real issues with preparedness, with discipline, etc., which are all plain to see.

In fact, it's those obvious and observable issues which have actually caused the big problem with "luck" as it pertains to this team right now: Luck should never have been allowed to play a role in these games at all.

In this post about "winning," Ken Pomeroy really cuts to the heart of the matter when talking about the role of luck in close games, particularly as it comes to the idea of "knowing how to win" (emphasis mine):

The teams that truly know how to win are the ones that have a cushion at the end of the game. They aren't at the mercy of wacky officiating, whimsical replay reviews, or half-court heaves.

When you play close games, you increase the likelihood that simple randomness -- a bad bounce or bad call or ill-timed mistake, most of which is out of your control because stuff ... just ... happens -- influences the ultimate outcome. As much as some people resist the concept of luck, that's exactly what announcers are referring to everytime they say, "You can't let this team hang around ..."

WSU is playing far below its potential, and that has allowed some bad fortune to swing at least one of these games, and perhaps even both. It's something that's made even more jarring because of last year's results, which so often saw fortune go the Cougs' way.

I'm not saying WSU was lucky to beat USC, Arizona and Utah. I'm simply saying WSU seemed to catch a lot of breaks at some pretty key times against beatable opponents.

I'm not saying WSU was lucky to beat USC, Arizona and Utah; that would devalue the team's accomplishment, and I'm certainly not trying to do that. I'm simply saying WSU seemed to catch a lot of breaks at some pretty key times against beatable opponents, with their turd-ish performances -- in which everything seemed to go wrong -- coming against teams that probably were going to curb stomp them anyway. Had things broken the other way at any number of key points -- something that didn't happen until the bowl game -- maybe that team finishes that season with only five wins instead of six and never gets to that extra, 13th game.

That's honestly what scares me about how this season will play out, record wise. WSU has already squandered two of the precious few contests where it has no distinct talent disadvantage. There just aren't too many of those left on the schedule, and I suspect WSU will win against Portland State and then pick up a few Ws against comparably talented teams while still failing to get over the hump against the likes of Oregon, Stanford, USC and Arizona State -- even if they somehow get the benefit of some good fortune in those games.

The run defense held Nevada to a paltry 3.8 yards per carry. That's not dominant, but it's pretty darned good against a team whose bread a butter is running the ball, and it's especially nice to see in the context of the mess of the previous week. There really was only one breakdown -- Cody Fajardo racked up 55 yards on a zone read up the middle -- and that's encouraging after so many breakdowns the week before. 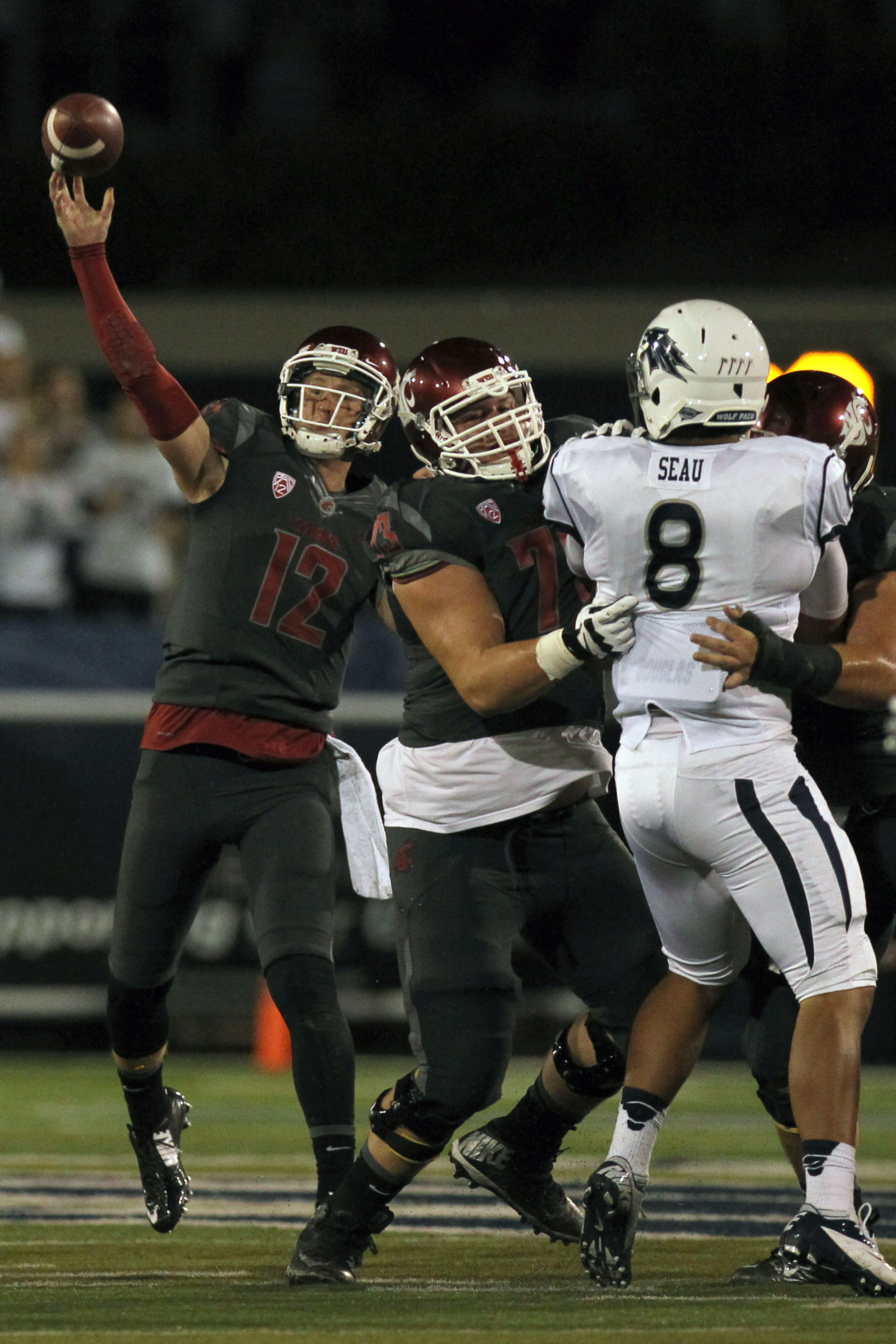 Connor Halliday and the offense need to come out clicking from the first snap. (Photo: Lance Iversen-USA TODAY Sports)

The offense needs to play from the first snap. Period. There is absolutely zero excuse for the slow starts to the games in particular and the season in general for this unit. Connor Halliday is a freaking fifth-year senior. The receivers all returned. These guys should have hit the ground running, and they haven't. It's inexcusable, and it makes it increasingly difficult to stand behind Halliday when the pitchforks come out.

I don't know how to fix it. Good thing I'm not the one being paid to do it. Because someone needs to.

I'm going to go outside the box and pick punter Jordan Dascalo, because I think he's pretty much the only dude on the team who has yet to royally screw up. Punting was a constant issue the last two years, and Dascalo looks as consistent as anyone we've had in years.

I don't care that we're only five punts in. Give me my sunshine.

The dropsies are really starting to get old, Dom Williams.

Portland State Vikings. No preview. We should kill them.

WSU vs. Nevada: Cougars drop to 0-2 behind uninspired offense