Not content to merely watch our brackets go up in flames, we got together to add a layer of fun to our tournament-watching experience.

While filling out brackets is fun and you should totally join our CougCenter Bracket Challenge, I reached a point in my fandom a few years ago where I wanted to add a wrinkle to my viewing experience.

Thus was born CougCenter's Draft Challenge, a game I totally made up with some input from Craig, Mark and Kyle. The idea was to create a game that perhaps introduces a little more skill while reducing some of the randomness. Because we all are familiar with the way non-sports people usually dominate our office pools:

We now head into our third year, and we've learned a couple of things. Well, really just one thing: Craig is very good at picking champions! He's picked the champ for two years running, and he's got Kentucky this year. Will it be enough for him to defend his title?

We'll go over the rules briefly, followed by our picks and some analysis that just might provide some insight into the teams for your own use in filling out your bracket. (Or whatever other wacky March Madness game you and your friends have concocted.)

Each win by a team in the tournament earns the following for each player:

This creates incentive for picking different levels of seeds based on the risk/reward of the point values. As you will see, it resulted in some differing strategy on which teams to select.

Listed in the order of drafting. Taking over as our special guest player this year? Britton Ransford of WazzuWatch.com!

Craig got the first pick again, only this time, he didn't go with a four seed. Wuss. Here's each author's analysis of their draft and their teams.

I'm all about champions. Two years ago? The champs were all I needed. I picked the Louisville Cardinals and they took me to glory. Sure, I finished last, but I picked the friggin' champions of these United States of America. Nuss may have "won" that year, but he did it with a bunch of losers.

And back I came last season, picking the CHAMPS once again: the 7th-seeded UConn Huskies. Best thing? I didn't even need them. I wiped the floor with Nuss, Kyle, Mark and that newspaper dude. I won by so much, I didn't even need the Huskies. The Final Four was a victory lap. A coronation confirming my superiority.
But it made sense that I had UConn. Because champions and champions go well together. That's why I nabbed the GOAT Kentucky Wildcats with the top pick, so that the champs are in their rightful place on the winning team.
Need more convincing? The first letter of each team I drafted in order: KUOBSTAIWSLT.  Rearrange them?
KILOWATTS BUS
It's about to get electric up in here.

I've never been so blind heading into a NCAA tournament, so I just wanted to get my excuse published and ready for a couple weeks from now when I'm sitting in last place because I didn't do math things and look at Pen Komeroy lists.

With my first two picks, I took Wisconsin and Wichita State. Why? Because W stands for win. Realizing that the rest of the W teams are awful, I decided to flip the W upside-down and took Michigan State and Maryland. Then things got out of hand.

After realizing that Maryland was in the same region as Kentucky and that Michigan State has a Second Round date with some Tony Bennett team, I started sweating. It's tough being sandwiched between the two advanced metrics, analytics, math, excel spreadsheet, basketball whatever stat guys.

I was rattled, and so I just started Google searching "NCAA tournament Cinderella teams" each and every time they hijacked my brain and stole my picks. So here I am, with six seeds at No. 11 or higher, and a real shot at having zero teams left come Sunday evening. 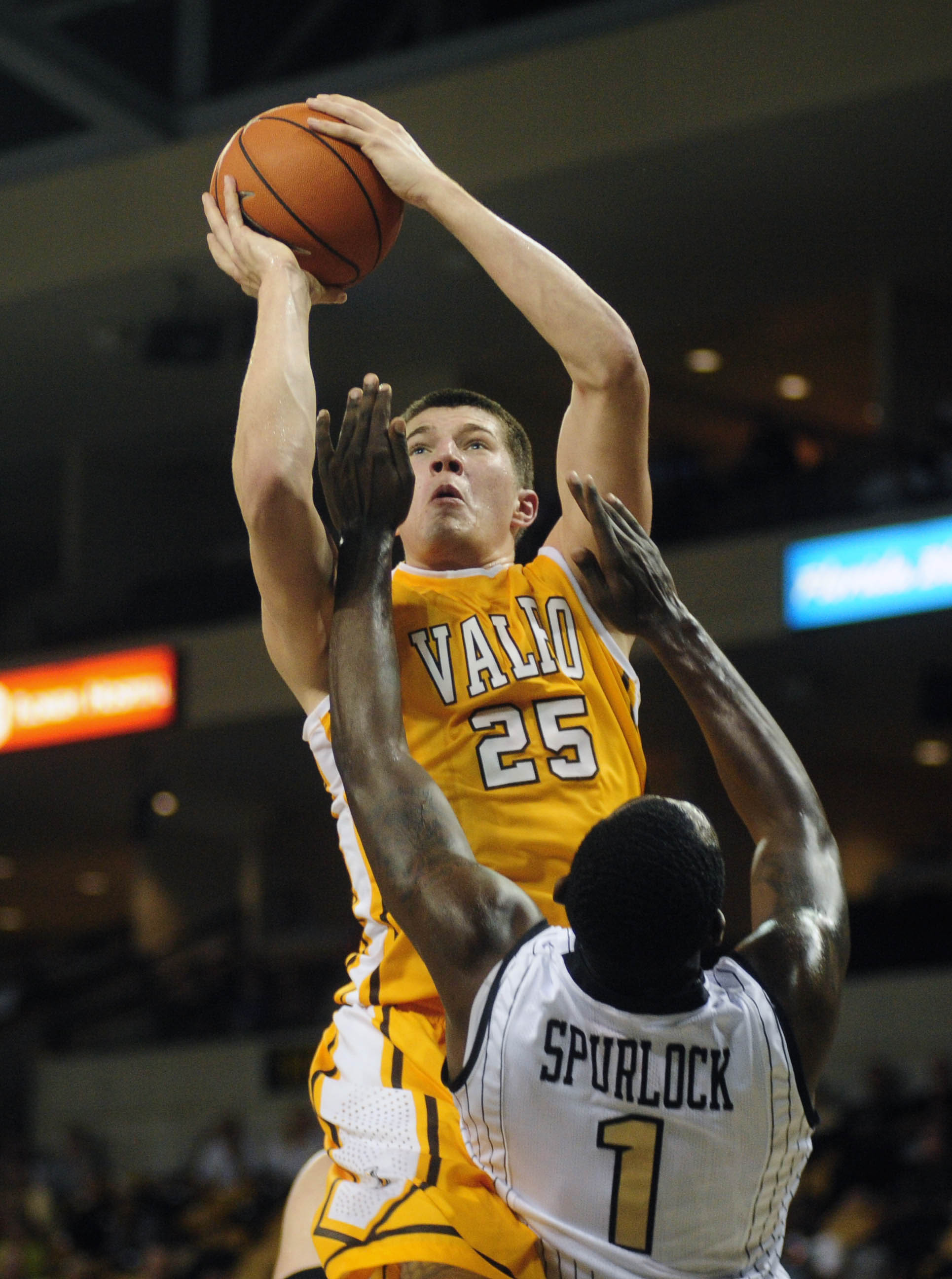 Alec Peters is capable of putting the Crusaders on his back for a game -- or two. (Photo: David Manning-USA TODAY Sports)

Unlike these other jokers, I don't have anything funny or pithy to say. I'm coming back for the title that rightfully belongs to me. I grabbed Arizona because I think they're as good as any team not named Kentucky; snagged Northern Iowa for the point value, as I see them as underseeded with perhaps the easiest path to the Final Four of any seed in that range; and I think I got good value with Notre Dame and Iowa State in the third and fourth rounds, as I love both of their chances to go deep.

I also think I snagged the best 13 and 14 seeds. I talked about Valpo in my bracket reaction post on Sunday -- Alec Peters is the real deal -- and Georgia State is a team with real talent, including Louisville transfer Kevin Ware (who scored 18 in the conference championship win) and Kentucky transfer Ryan Harrow (who is questionable, though), while wing R.J. Hunter destroys people by getting to the free throw line with tremendous frequency (where he makes 89 percent of his attempts). And let's not pretend that Baylor doesn't have a history of choking. Also pretty stunned I got Wofford as late as I did.

All told, I love my high seeds to go deep, and I think I picked up most of the best candidates for first round upsets. I think that's a recipe for success.

While Team Evil assembles its forces for another shot at the title, it cedes the rest of its time to just reprint last year's Victory Proclamation:

As the wise old sage Dark Helmet once said: "So Lonestar, now you see why evil will always triumph: because good is dumb."

While the rest of you prayed to your God, Ken Pomeroy (or whatever sort of kitten sacrifices they have going on at Rivals) to save you, I found value in taking all the teams you refuse to support. Do you know how many of our members wanted to read any of you write about how conflicted you are because you're "forced" to root for Tony Bennett? None of them. So I took Virginia off the board. Same for those in love with the plucky Boise kids and their coach who was supposed to bring a Natty to Wazzu. Took the Broncos off your hands, too!  Can't bear to see anyone at Bruins Nation happy?  You bet your ass I can!  Oh, you can't bear to root for Duke, Gonzaga or Oregon? Mine, mine and mine! Are you old school and still hold a resentment over Oklahoma stealing Kelvin Sampson? MY SEVENTH ROUND PICK. I even rounded things out by volunteering to take UAB. Wait, UAB isn't evil, is it? Well if they make past the first round, that means the most entertaining team in America, Iowa State, was sent packing and you're gonna hate life. So, they're mine too.  And if #MyHoosiers of Indiana have so much as a halftime lead against Wichita, I will be insufferable(r). Hail Hydra.

So join me and embrace your inner Cobra Commander. I've hijacked the controls off this game and have given you the villain you crave to root for against these four masses of vanilla. Dark Helmet compels you!

The strategies I tried the first two years didn't work. Last year, I tried to grab as many teams that were highly ranked as some point as I could. The hope was they would play up to their top 10 potential for at least a couple games. That was good enough for a second-place finish, but what good is that? This year I knew I needed a new plan, but forgot to devise such plan. So when emails started flying I quickly cobbled something together before Nusser could ALL CAPS yell at me for being slow.

I started out by completely ignoring the teams. I found a history of how seeds have fared in the history of the tournament. I then plugged the average wins of each seed in with the point values they'd earn to create a rough idea of expected points. What that told me was I wanted No. 1, No. 2 and No. 4 seeds. I made a 1-64 list of teams based on seed then filled it out by blocks of four based on KenPom rankings. The No. 4 seeds were my second group, so I was very happy to get three of the four. Combined with Villanova, I picked up four of the top eight according to my fool-proof and well thought out plan.