We watched the fast rising defensive tackle play for three years. Here's what we saw.

When Xavier Cooper declared for the NFL Draft following the 2014 season, it was both surprising and unsurprising to WSU Cougar fans.

It was surprising in the sense that the defensive lineman didn't necessarily fit the mold of what most fans consider the typical early entrant to the NFL draft; in his time at WSU, Cooper didn't preternaturally dominate the competition, didn't prove that he obviously was ready to move on to the next level.

Learn more about the new Browns 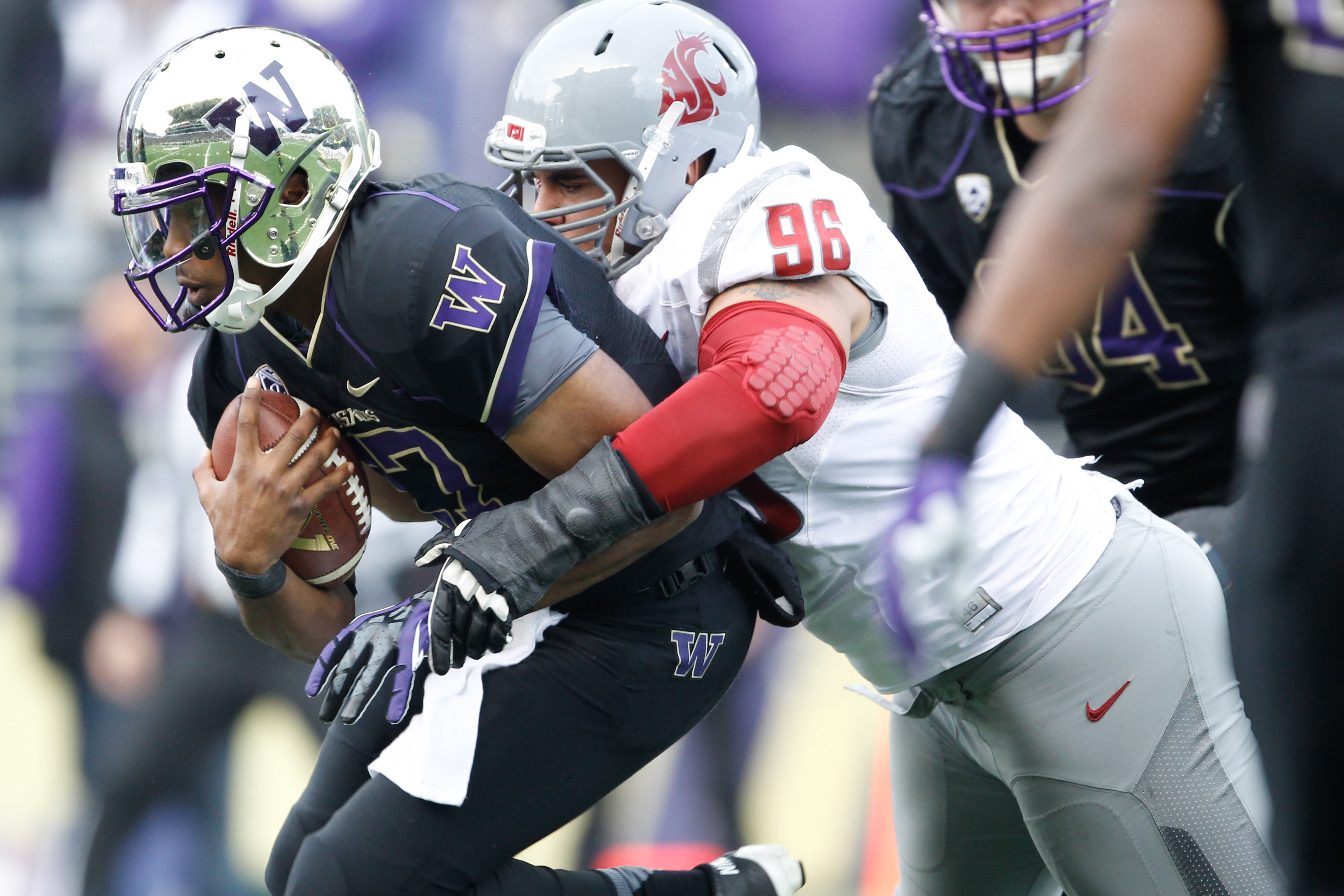 Those paying close attention couldn't have been caught all that off guard, though, as there were rumblings early in the season that he was considering it. It seemed odd, as he didn't have a monster sophomore season, and his junior season was even less statistically impressive, so many wondered why he'd make the jump. But when you consider what Cooper got through to get to this point -- and what kind of person he is -- it makes a lot more sense.

Here's what we learned from watching Cooper play for the past three years.

Explosive first step: Cooper is incredibly agile for a big man, something we already knew from watching him and something the rest of the world discovered when Cooper had a monster performance at the NFL Combine (video here). In fact, his test results placed him in the 86th percentile of NFL defensive linemen in pSPARQ, which is a measure of general athletic ability. His calling card as a player is disruptive penetration.

High motor: As a defensive tackle who is athletic and little on the lighter side, Cooper is able to continue to pursue a play until its conclusion. Notice on this play how he is initially blocked (Cooper lines up over the left guard), but continues to work, eventually looking a bit like a linebacker -- breaking down to make the play in space.

Grit: This is where that whole "we probably shouldn't have been surprised by his early declaration" comes from. Cooper's journey to WSU has become well-documented in the last couple of months: Diagnosed with a learning disability early in his high school career, Cooper became disillusioned with school despite clearly having a bright athletic future. It put him behind on his pace toward graduation, and made him ineligible to play college football out of high school.

That's not uncommon in the athletic landscape. What Cooper did after that, however, is rare.

Rather than heading off to a junior college, Cooper signed with the Cougars in 2010 and then grayshirted, using the time off from football not to develop physically -- as most grayshirts do -- but to take classes at Tacoma Community College and finish his diploma. He then enrolled at WSU in January 2011, but instead of playing immediately in the fall -- he almost certainly could have contributed on a team that was still rebuilding in Paul Wulff's fourth year -- he redshirted.

Not everyone responds well to a year away from their sport and another year away from competition. But Gregg Bell of The (Tacoma) News Tribune detailed just how important those two years were for Cooper:

Cooper's critically soft landing at WSU allowed him to take full ownership of his responsibilities on and off the field — and fully manage that learning disability. He didn't just get by, he flourished in the classroom.

He bulled through academic challenges and compensatory strategies like overmatched linemen. To conquer the daunting challenges of writing papers, he prepared detailed outlines for each assignment. He was proactive. He was prepared.

And he indeed conquered.

"I'm proud of him," Irwin said. "I know this (the NFL) is his dream. I have all the faith in the world in him. He's just one of the most driven, determined people I've met."

As Levenseller added: "Really, it all comes back on ‘X.' He pushed. He did the work."

Because of all of that, Cooper actually is 23 -- older than your typical early entrant. That he made it this far is an enormous testament to Cooper's make-up. He was ready to move on, and he's just eight credits shy of his bachelor's degree.

Lock up: Cooper's measurements at the combine revealed arms that are a little on the short side, and although he does use "violent hands" -- something Danny Kelly talked about for SB Nation's report -- sometimes offensive linemen can get their hands on him and lock him up, neutralizing his quickness.

Finishing the play: Scouts always debate about potential versus production. For a guy who is supposed to be able to make his living being disruptive, Cooper didn't rack up a ton of tackles for loss -- he was 24th in the Pac-12 last season. (He was ninth, however, in 2013.) Sometimes Cooper is able to get in position to make a play, but doesn't bring the guy down -- even in the two clips above, he doesn't cleanly bury the guys.

Whoever drafts Cooper probably isn't getting a future all-pro, but that's not what you're expecting to get in the third round, which is where media scouts have projected Cooper to be taken. What you hope to get in that range is a productive starter who can stick around the league for a number of years, and that's likely what Cooper's new team is going to get from him.

He's clearly got athletic ability that will be on par with his NFL peers, and his sheer determination to make it to college and then the NFL shows just how hard he'll work to continue to stay there. Cooper might have been another "what could have been" story. Instead, he appears ready to carve out a nice 7- to 10-year career in the NFL. Lance Zierlein of NFL.com compared him to Tampa Bay defensive tackle Clinton McDonald; if that's what he turns into, some team is going to be very happy.