College basketball rules changes should have a positive impact

Some are expressing trepidation over the changes, such as a shorter shot clock, but the cumulative effect should help grow the profile of the sport.

Share All sharing options for: College basketball rules changes should have a positive impact

Since this is the internet, and the internet is forever, I hope I don't eventually regret what I'm about to say.

The NCAA got it right.

Man, never thought I'd type those words. But that's exactly where I find myself after the men's basketball rules committee pushed through a series of changes last week that will reshape the sport starting in 2015. Among the major changes, which have been generally lauded (although not universally embraced - more on that momentarily):

There are a lot of ideas for making college basketball better. We evaluate some of them and wonder what you think.

College basketball's rules committee is meeting this week in Indianapolis, and the proposed change causing the most debate probably isn't worthy of all the attention.

All of these changes touch on the theme I emphasized the last time this subject of "fixing" college basketball was in our consciousness a couple of months ago as the NCAA tournament was getting ready to tip off: That the primary concern should be increasing the watchability of the sport, which ultimately is entertainment. Aesthetics matter, and there's little doubt that the vast majority of these changes should make the game more watchable.

Well, eventually, anyway. You'll note that the first item on the list includes actually enforcing something that was put on the books two years ago, which actually did dramatically increase scoring. Unfortunately, it also resulted in so many fouls and free throws that referees basically stopped calling things so tightly by the time conference play rolled around before completely abandoning the changes this past season.

But as I said before, this sort of change is like medicine to cure a sickness -- it will, without a doubt, taste bad ... but if you give it time, it'll do the job. The NBA proved that. It's probably going to be super ugly again next season, and there probably will be a lot of dissatisfied coaches and media members when it again becomes a parade of free throws for the first two months. That said, there seems to be a commitment to giving all of these changes a real shot to have their intended effect, and I'd be willing to bet we'll see noticeable positive changes by the middle of the conference season, which means the 90 percent of college basketball "fans" who don't turn in until the Big Dance will be impressed by what they see.

"Without question, this will require an adjustment period for everyone in the game and it is likely to be difficult at times," said Rick Byrd, the chair of the rules committee and head coach at Belmont. "If we strictly enforce these rules consistently, we believe players and coaches will adjust and the game will be much better in the future."

I think the key here is to not think of any one rule change as some sort of panacea -- particularly the 30-second shot clock, which I believe will be positive but ultimately have a relatively negligible effect in isolation. There's a lot of hand-wringing over this particular change, which most people interpret as an attempt to artificially prop up scoring by adding a handful more possessions each game.

Doomsdayers worry that the loss of those five seconds will have some sort of crippling effect on offenses -- never mind the fact that quite literally the rest of the planet operates with a shot clock of 30 seconds or less and seems to do just fine. But even in the face of such evidence, some, such as Jon Wilner of the San Jose Mercury News, worry that this potentially will cause more problems than it solves:

Think about where in the possession the reduction will have its greatest impact: the middle.

Most teams are unlikely to shave the time in the early moments of the possession – they’ll move the ball across halfcourt at essentially the same speed as before (point guard catches inbound pass, begins jog up the court, looks to bench for instructions, etc).

And the final 5-10 seconds of the possession are fixed: It’s scramble time whether the clock starts with 35 seconds, 30 seconds or 24 seconds.

The change, it seems, will reduce the available time in the middle of the possession, when the offense runs the designed play to get good shots for its best shooters.

Instead of initiating the set offense at the 27-second mark, for instance, many teams will start at 22 seconds – less time for the most important sequence of the possession, the sequence designed to get quality shots that are at the heart of a free-flowing, entertaining game. 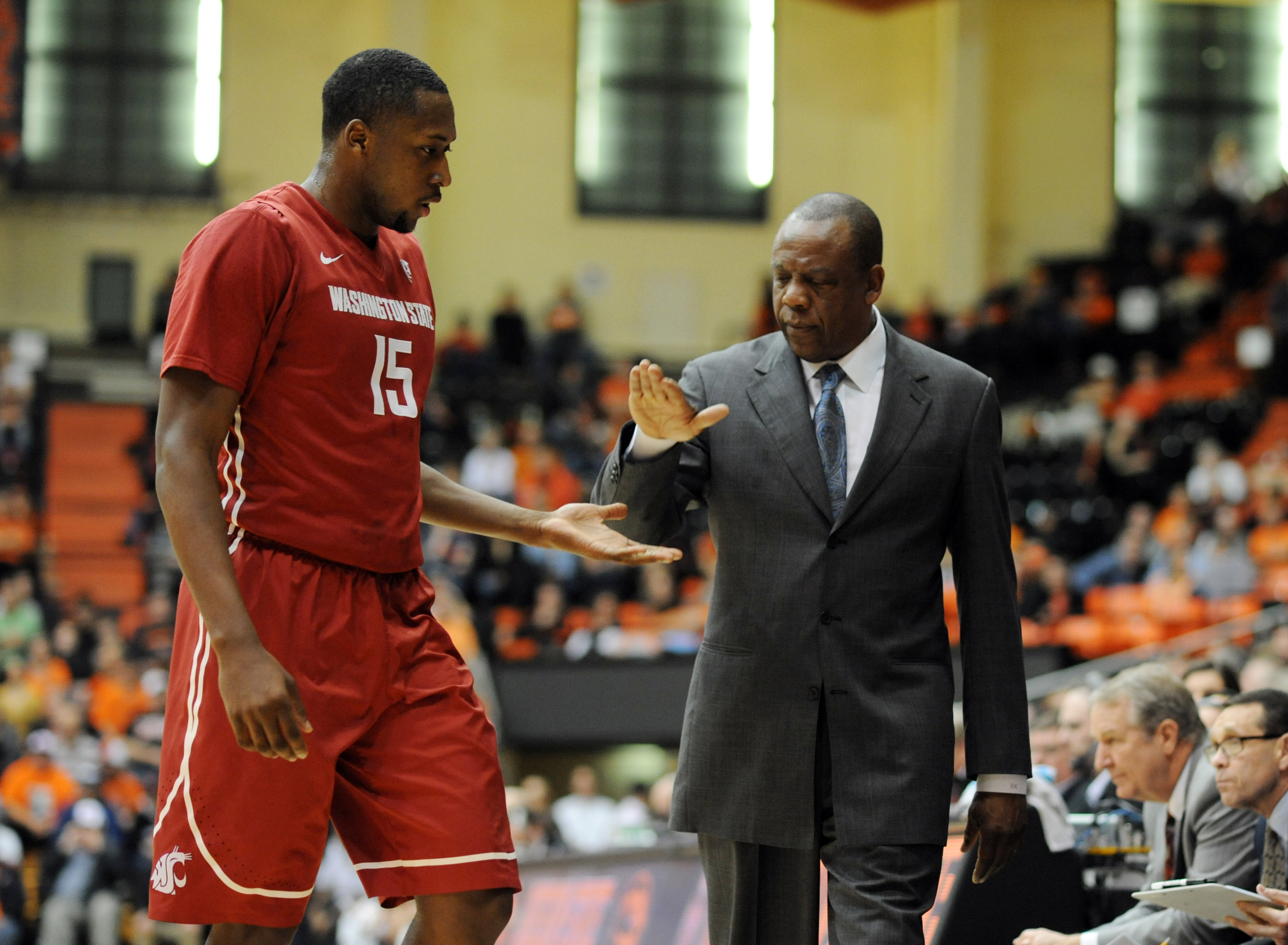 I think Wilner's logic is sound, but I think he's missing one huge factor -- a factor I might not have given much weight to had the Cougars not undergone such a dramatic offensive transformation under Ernie Kent this past season.

Simply put, too many teams don't really try all that hard to score in those middle seconds that are going to be reduced. Oh, coaches will try and tell fans their team is working for the best shot, but any reasonably savvy basketball fan can plainly see when a team is running motion to get a quality shot and when a team is running motion just to run motion and take time off the clock. We watched Dick Bennett do the latter for three years, and we watched Ken Bone do it for his last two. (I'd argue Tony Bennett ran a lot less false motion than his dad, probably largely because his teams were a lot more talented.)

Then along came Kent, and for the first time in a while, I got an up-close look at what basketball can look like when a team tries from the get-go to simply get a good shot while being completely unafraid to trigger the first open look -- and got to experience how much fun that can be to watch.

There's this wrongheaded idea among many coaches that early offense somehow represents bad offense, that the only acceptable shot is one that comes after making the other team defend for some predetermined amount of time. But the reality is that for every questionable shot early in the clock from a team that is willing to shoot the first good look, there's an equally questionable shot late in the clock from a team that is hell bent on "execution," which is somehow supposed to yield a wide-open look. Of course, it most often doesn't.

I do recognize that some coaches really are purposeful with this strategy -- Tony Bennett and Princeton disciples such as Joe Scott come to mind -- and I know that they would say the extended offensive sets help them on the defensive end. I think it's a totally valid strategy for the handful of teams truly committed to this, which, as I've noted, is not most of the teams who play slow. Even so, the problem is simple: For the vast majority of fans, it's insufferably boring to watch, no matter how well it's executed.

If casual college basketball fans had the writers' beliefs about what supposedly makes the sport great, wouldn't they already be filling arenas and tuning in?

I'm on record as saying I love watching what Virginia and Denver do. I appreciate the commitment and discipline it takes to play as they do. But I also recognize Ireally really really love college basketball, and I'm not the casual basketball fan these changes are designed for. And I think that's the trap into which too many in the media fall: Hardcore college basketball culture can be incredibly insular, and those on the inside assume they know what's best because they invest the time to follow it closely. It's an attitude of earned superiority, but what they're really doing is projecting their own preferences onto others.

It seems pretty straightforward to me: If casual college basketball fans had the writers' beliefs about what supposedly makes the sport great, wouldn't they already be filling arenas and tuning in?

That's the question the coaches, most of whom seemed to be pretty content with all the contact, pace and stoppages, actually had to ask themselves. ESPN's Dana O'Neil wrote about how Byrd approached her and some other media members to get input on how to make the game better. Remarkably, the coaches recognized their seat on the sideline might not provide the best perspective for analyzing what might make the game more appealing to the masses who only tune in when the stakes are at their very highest.

Each of these changes is a part of a larger purpose, and if each one can make the game a bit more watchable -- if the game eventually is a bit more free flowing, with a few more possessions (or, as John Gasaway puts it, "an increase the amount of basketball played per 40 minutes"), with a non-negligible reduction in stoppages -- the cumulative effect hopefully will be enormous and put some beauty back in a game that has generally ceased being attractive on most nights.

And if it doesn't work? Make another change in two years. We're not talking about writing the Ten Commandments in stone, here.