The Monday After: Shouldn't I be happier after beating Wyoming? edition

In which we step back to take a philosophical look at our fandom.

Share All sharing options for: The Monday After: Shouldn't I be happier after beating Wyoming? edition

I've been writing about WSU football at CougCenter for eight years, and there are times when I can see obvious ways in which watching every minute of every one of those mostly terrible games has affected me.

Like when WSU beat Oregon State back in 2010. The Cougs won their first conference game in nearly two years ... and I didn't even really enjoy it all that much. First, I kept waiting for it all to fall apart. Then, once it was clear the game was in hand, all I could focus on was how it didn't seem like the performance was actually repeatable and we still probably were doomed going forward.

Which, of course, is stupid. Of course it wasn't repeatable to run the ball 60 times and average 5.0 yards per play and win by two touchdowns. But who cares? The whole point of being a fan is to be able to take a break from real life, enjoy your team competing, and when the team actually gives you something to be happy about, yanno, be happy.

I was not very happy Saturday night. As I've said, that is actually pretty stupid, since WSU won the game.

And if I'm being honest, I probably shouldn't just blame it on all of the bad football I've watched so intently; this is just sort of how I'm wired. I remember wringing my hands over the 2008 basketball team, wondering at the conclusion of each game if the team was going to make it farther in the Dance than the previous year. I mean, that's when things were good, and I still had to remind myself to just enjoy the ride, because who knows when it's going to come around again?*

*Side note: AARRRRRRRRRGGGGGGH STILL WAITING THANKS A LOT TONY

This analytical side of me is what allows this writing that some of you seem to enjoy to exist in the first place, but it's also the thing that causes those that despise analytics to scream at me "the game isn't played on a spreadsheet you loser" and be sort of right about it. Here we are, three games in -- 25 percent of the way through something that we wait months and months and months and months for -- and I'm doing it again. The Cougs are 2-1, exactly where I figured they would be after three games ... and of course my angst is riding high, since they didn't get there the way I thought they should.

Have I mentioned how stupid that is?

At any rate, now that I've had a couple of days to think, I'm just going to try and be happy that they're 2-1. I'm going to go back and re-watch Rutgers and Wyoming and take some notes on some things I've been thinking about writing, but mostly I'm just going to try and enjoy the wins and remember that this is still a young team with a young QB and a young defensive coordinator that still has a lot of room to grow. There are, indeed, legitimate reasons to think tough times are ahead for these guys, but we'll worry about that another day and enjoy the winning record heading into the bye week. 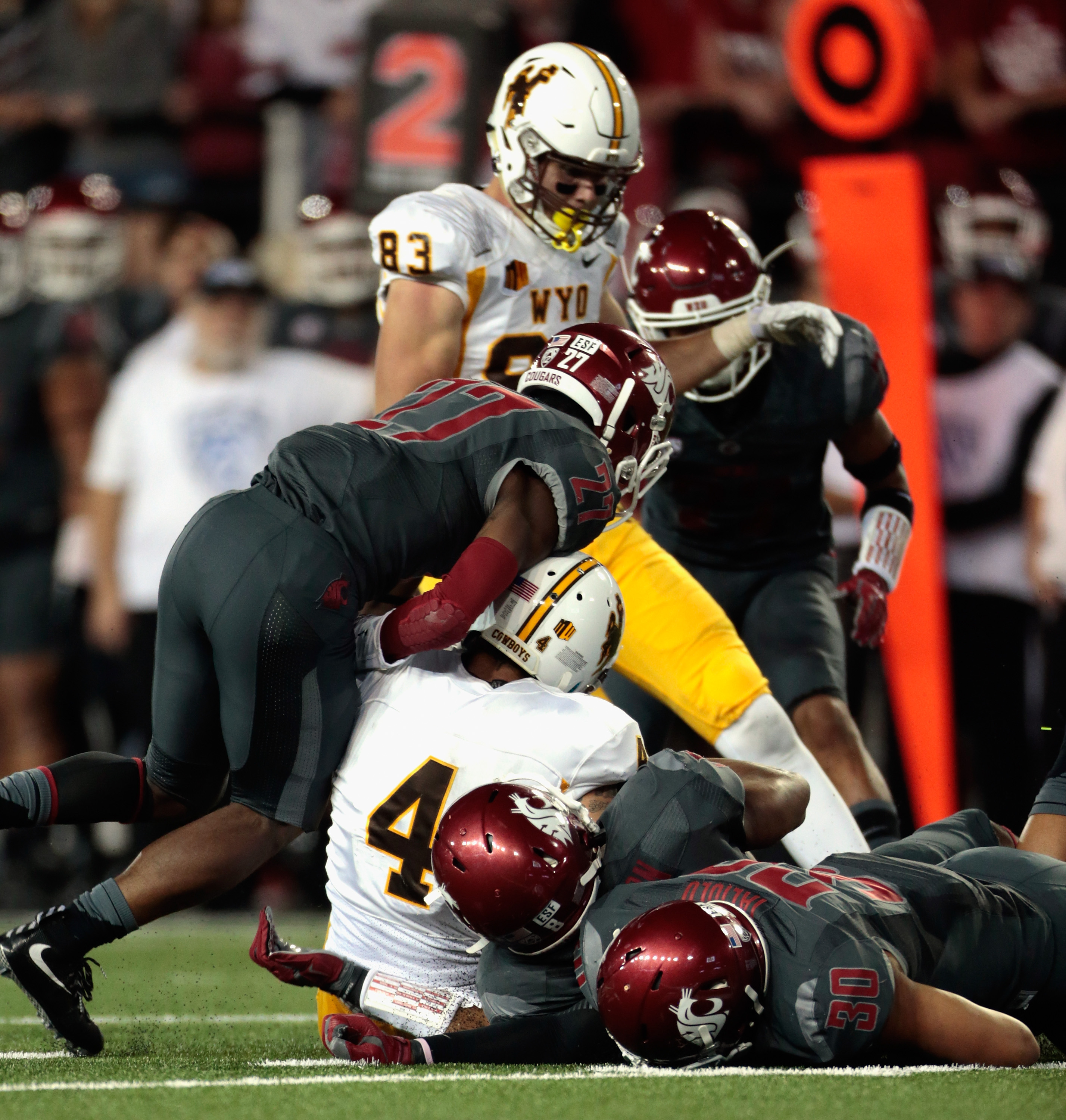 The defense was fast and loose in the second half. (PHOTO: William Mancebo/Getty Images)

The Cowboys put up 7.1 yards per play in the first half; the Cougs slashed that nearly in half after the break (3.7). They were fast, they were physical, and Wyoming really had no answer. It was pretty great to see WSU be the ones to make noticeable adjustments to shut down an opponent, especially when it seemed that Craig Bohl was running circles around Alex Grinch early.

A lot of credit goes to the interior defensive linemen, particularly Robert Barber and Daniel Ekuale, both of whom I called out in this space a week ago. They were much better, particularly in the second half, and their improved play had a lot to do with the plays that both Peyton Pelluer and Jeremiah Allison were able to make in the second half. It's amazing what linebackers can do when they don't have 300-pound offensive linemen all up in their faces.

Without a doubt, the defense has been inconsistent. But there's a part of me that thinks the best is definitely ahead. Beyond the learning curve for Grinch, let's be honest: This scheme isn't built to stop the kinds of offenses WSU has faced so far this season. It's easy to say WSU should have had a distinct enough talent advantage to mitigate whatever scheme issues there might be, but I don't think it's much of a stretch to think the defense could have looked a lot better with a third heavy linebacker in the game instead of the nickelback.

Things get very different with Cal in two weeks. Time for Grinch to show what he envisioned against a team with a really, really, super good offense.

It's a fool's errand to lament the team's inability to "put together four quarters." These are college kids and games are long and that means there will be a natural ebb and flow to any game. Almost nobody plays what anyone would consider a "complete game," and if they do, it happens once or twice a year for the vast majority of teams. The teams that are truly successful aren't the teams that play "complete games" all the time -- they're the teams that are still talented enough to win, even when they don't have a "complete game."

That said ... I think it's pretty obvious this team can improve this area. Nobody's asking for four quarters of perfection, but I think it's not too much to ask that the team stop coming out of the tunnel flat and lacking a fundamental respect for its opponent.

Somehow, some way, Mike Leach has to get his team to adopt his mantra of being the most excited to play ... and not just for two out of every four quarters.

We could have gone with Pelluer here, who had the breakout game we've been waiting for. But since we mentioned him above, let's go with safety Shalom Luani. The junior college transfer has been growing every week, and he's starting to get comfortable enough with where he's supposed to be on the field that his athleticism is finally getting a chance to shine.

Nah, I don't feel like calling anyone out this week. High fives and butt slaps all around.

As mentioned, you all get to spend copious amounts of quality time with your families on Saturday, as the Cougars have a bye. They'll travel to Berkeley the following weekend to take on Cal, which is undefeated and looking pretty darn good with Jared Goff marching his team up and down the field. The Golden Bears are 11th nationally in total yards and 9th nationally in yards per play, meaning their both prolific and explosive and yeeeeeep WSU is going to have its hands full.

If there's a place for optimism, it's that Cal's defense still isn't even close to the same level as its offense. The Golden Bears allowed Texas (which, if you haven't been paying attention, isn't a good team) to come back from a three-TD deficit in the fourth quarter. Only a missed PAT by the Longhorns kept the game out of overtime.