We're taking a different angle in the Corner this week, as there was the suggestion made that there is some interest in taking a look at one of the aspects of Colorado's offense, the RPO (Run-Pass Option for the uninitiated). I am nothing if not a man of the people, so we'll take that suggestion and run with it. Or pass with it if the weak 'backer crashes.

What is the RPO?

The Run-Pass Option is a packaged play combining a run play in the interior and a combination of pass routes by the wide receiver(s). Based on the action of an identified defender, the quarterback will make a decision during the play whether to allow the running back to take the handoff or to pull the ball out and throw to a receiver. The RPO is markedly different from the Air Raid in that the run/pass decision is made post-snap instead of pre-snap, but also because the Air Raid reads open space and leverage while the RPO reacts to a particular defender.

The run play almost exclusively used in the RPO is the zone, either inside or outside. Colorado implements both. The pass combinations are generally some sort of receiver screen or a quick hit combination that would generally be a three-step drop in a traditional passing offense.

Ace Gun Open. The more traditional Ace set is with 12 personnel, one RB and 2 TEs. Ace Open generally replaces one of the tight ends with a wide receiver, as is the case here.

The running back, Phillip Lindsay, is set to Sefo Liufau's left, so the run play in this case is going to be either inside or outside zone to the offense's right. In Colorado's scheme, from what I can tell, the receivers to the run play side (the right in this case) will run block. The receivers on the backside (and tight end, where applicable) will be the ones who run the routes.

They start in a 42 look with an outside 'backer walked up over the tight end. They end up in almost a 52 look as one of the bandit safeties walks up to the line of scrimmage. So we'll say... 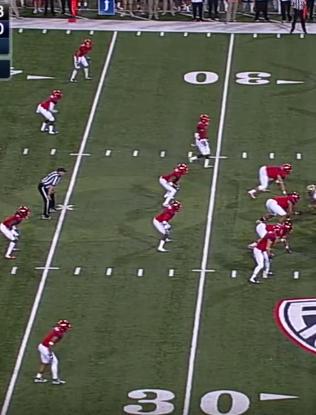 This looks like it's an outside zone play. The OL steps hard to playside and initially looks like they're getting width. The slot receiver at the top cracks down towards the interior and the outside receiver looks like he's setting up to catch and seal a defender if Lindsay takes the play all the way to the sideline. The differences between inside and outside zone can be tricky to pick up when the RB cuts inside early, which Lindsay does here. But it looks like the offensive line's aiming points are at the outside shoulders of the defenders, which makes me think outside zone. Lindsay's track is wide and flat, which is generally an outside zone track. 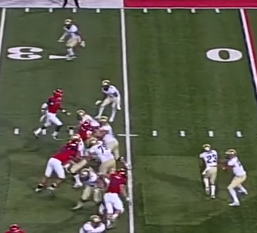 As I mentioned earlier, route combinations in an RPO offense are usually simple quick hitter sorts of plays designed to take advantage of a space vacated by a box defender crashing hard on the run. In this case, Colorado runs a slant-flat combination to the bottom of the screen. The tight end runs to the flat, which has the added benefit of pulling a defender out of the box. 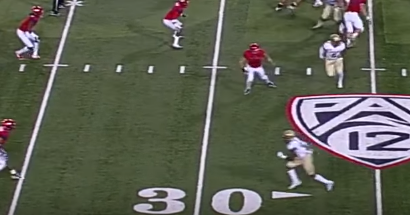 So how does Sefo Liufau make the decision whether to have Phillip Lindsay run it or to throw to the slant/flat side? He's watching one defender, and reading how that defender reacts to the run action. If that defender comes up to play the run, he'll throw the slant where he vacates. If that defender stays flat, then he'll give to ball to Lindsay. The defender on this play is the strongside (tight end side) linebacker. Liufau is staring him down.

The linebacker stays home, and that tells Liufau that it's a give read. He may have been spying Liufau and/or responsible for him on a zone read keep because he stays pretty flat-footed until he sees Lindsay with the ball. Then he comes up and tries to fill his run fit, but Lindsay makes him miss in the hole and scampers for about eleven yards on the play.

Nickel personnel - 42 Cover 3 Shell. What's interesting is that it looks like they're using the stand-up defensive end as their flat defender. So he's going to be responsible for covering out to the sideline. He's also going to be the defender responsible for Liufau on a zone read keep. That seems like a tough double duty to pull off, and CU will punish the Rams for it. CSU also rotates a safety down in the box to fill the hook/curl zone vacated by a blitzing linebacker. 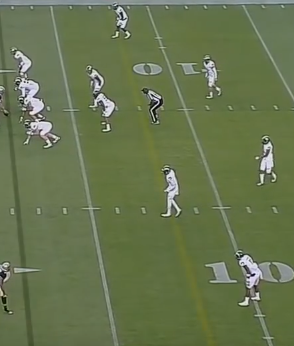 Colorado shows an inside zone look to the offense's right. The left guard also pulls around the center who pins down on the defensive tackle.

CU runs a bubble screen to the boundary. 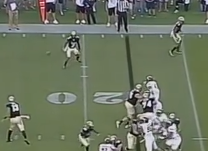 Remember that stand-up end with double duty I mentioned earlier? Yep, it's him.

He's forced to stay on the edge of the box due to the zone read look CU is showing. He's responsible for Liufau if the QB yanks it out of the RB's hands and takes off. That prevents the CSU defender from getting to the flats on time. It would be really bad for CSU if CU put a receiver in the flat on this play. So of course they did with the bubble. The outside receiver, Bryce Bobo, gets a great block on the corner coming up and Devin Ross outruns the rest of the Ram defense down the sideline and into the end zone for six points.

How do the Cougs defend against the RPO?

It's tough, and it's one of the reasons I'm glad I'm not a defensive coach.

In the NCAA, offensive linemen can be either two or three yards downfield on a forward pass beyond the line of scrimmage. This allows them to really sell the run part of the package. But the safeties and corners absolutely have to stay home until they see the ball in the hands of the running back and he's clear of the QB. That causes problems for run fits, because they come late, often too late to prevent the back from picking up a decent chunk of yardage.

The conventional wisdom right now for guarding against the RPO is to play more man-to-man coverage on the outside. Separate entirely what you do with your six or seven down in the box from what you do in coverage, and ask your box defenders to focus on shutting down running lanes inside. It's on the secondary to handle business on the edge. I would also dial up a healthy number of run blitzes to the zone side and just try to create havoc through penetration. It makes the defense a little bit more susceptible to big plays, which we kind of are already, but you have to give something to get something.

Here's hoping #SpeedD gets a lot more somethings than they give come Saturday afternoon.

Questions, comments, suggestions are always welcome. Let me know what you think.