I'm going to be honest. For three weeks, I hated the pre-snap shifting that Cougs started doing.

One of the hallmarks of the Air Raid is that it isn't overly complicated on its face. There are only a relative handful of route combinations that are run out of a small number of formations. Frankly, it's pretty boring pre-snap. You either get 20 personnel and a 2x1 look, or you get 10 personnel and either 2x2 or 3x1 with the WRs. Yawn.

But I didn't hate the pre-snap shifting because it wasn't pure Air Raid, nor was it because it amounted to just window dressing and gadgetry and had no real bearing on the play that they ended up running. I'm all for pre-snap confusion for the defense. No, the reason I hated it was because the majority of the time, the Cougs were in an illegal formation to start the play.

There are only six men on the line of scrimmage. If Falk snaps the ball here, it's a 5-yard penalty. If I'm a Defensive Coordinator and I see the Cougs line up in something funky, I'm just going to tell my guys to stand there and wait for them to shift into the formation from which they actually want to run the play. So if they were to just shift, they really aren't dictating coverage or match-ups from the defense, or creating much confusion. The defense just has to wait a few seconds and adjust.

But apparently Coach Leach was playing the long con.

Against Oregon State, WSU again lined up in a non-traditional formation. Oregon State, having seen the Cougs do this on at least three weeks worth of game film, doesn't seem too worried, and is even seemingly anticipating the Cougs to shift to another formation. Plot twist: They didn't. Instead, they ran off OSU's coverage and hit BOOBIE on a Shoot route underneath, catching OSU off-guard.

Blue Over? Junk? Triangle? Who knows. I like Triangle, because the three WRs roughly make a triangle and I did well on shapes in Kindergarten. 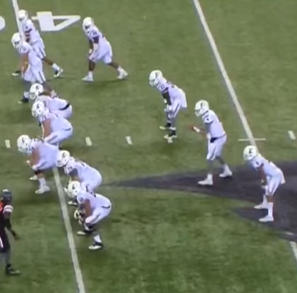 This formation is actually legal, but the catch is that Cracraft is ineligible because he is covered by Lewis. Morrow is the deep man of the triangle, and the GOAT is actually lined up in the backfield at what would roughly be the H. Similar to his alignment on the Shovel Pass we talked about a couple weeks back, BOOBIE is a bit forward and a hair wider in his alignment. This is entirely a "catch the defense sleeping" play, so the formation's only goal is to overload one side of the defense and outnumber them before they can recover. 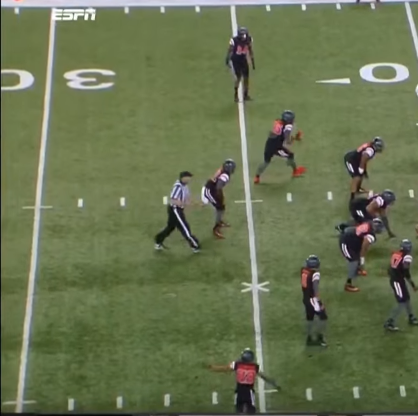 WSU has a numbers advantage on the edge due to formation. The triangle plus Madison at the right tackle gives the Cougs four to block four. In addition to that, the OSU defensive front isn't even ready to play football at the snap. I think they were expecting the formation to shift, since that is what the Cougs had shown previously. One of the linebackers is misaligned (and is still in the process of putting in his mouthpiece), and two of the three down linemen aren't even in a stance. 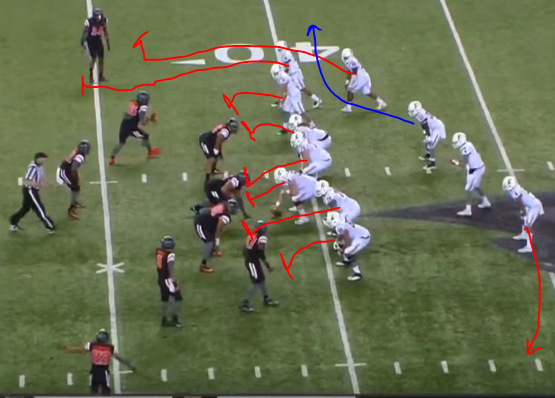 Cracraft and Madison double the blitzing linebacker, in your run of the mill WR/RT combo block, giving BOOBIE the edge. Lewis gets up to the safety just out of frame and seals him. Morrow gets in the way of the corner in a block that isn't pretty, but is effective. Falk takes a quick drop and hits BOOBIE in the flat, and BOOBIE is off and running, picking up eleven yards before being bumped out of bounds.

Pretty simple play, but it goes to show how coaches are constantly looking for little tweaks and wrinkles that they can use to get an edge. Probably the best part of this play, though, is how it set up a play out of the same formation against Arizona. The Cougs lined up in the same Triangle formation, and showed the same look, but instead of throwing the shoot route, Morrow ran a wheel route and was untouched up the sideline for 53 yards. No pictures on that one because I can't find/no one has uploaded the game on YouTube.

These types of formations have a limited shelf life. As much film study as FBS coaches have access to, the next time someone sees this formation, they'll be wise to it. But when you can catch the defense on the wrong foot, these plays can be dangerous.

If you have any questions or comments about this or any play you've seen the Cougs run, leave them in the comments and I'll answer them to the best of my knowledge and capability. If there's a particular play you'd like me to break down in the future, let me know and I'll see what I can put together.

(Credit to SomethingSnazzy for taking the time to put the GIFs together.)