The soft-spoken receiver quietly ascended to the tops of the WSU record books during his time in Pullman. Now he's ready to take on the NFL.

Dom Williams, a soft-spoken receiver out of Pomona, Calif., is no stranger to flying under the radar. A two-star recruit out of high school, Williams was recruited to Washington State by the Cougars' former staff, choosing Pullman over several Mountain West schools and eventually redshirting his first year on campus.

As a redshirt freshman under new head coach Mike Leach, Williams began to emerge, silently but consistently in the Cougars' Air Raid attack. The 6-foot-2, 200-pounder, then going by his full first name, Dominique, played in 11 games in 2012, hauling in 34 catches for 546 yards and three scores in his debut season. And so began his steady incline.

Over the next three seasons, totaling 38 games, Williams would go on to best his previous years' totals in catches, yards and touchdowns, culminating in a superbly efficient senior season with 75 catches, 1,040 yards and 11 touchdowns, dwarfed only by Gabe Marks' ridiculous 2015 campaign. 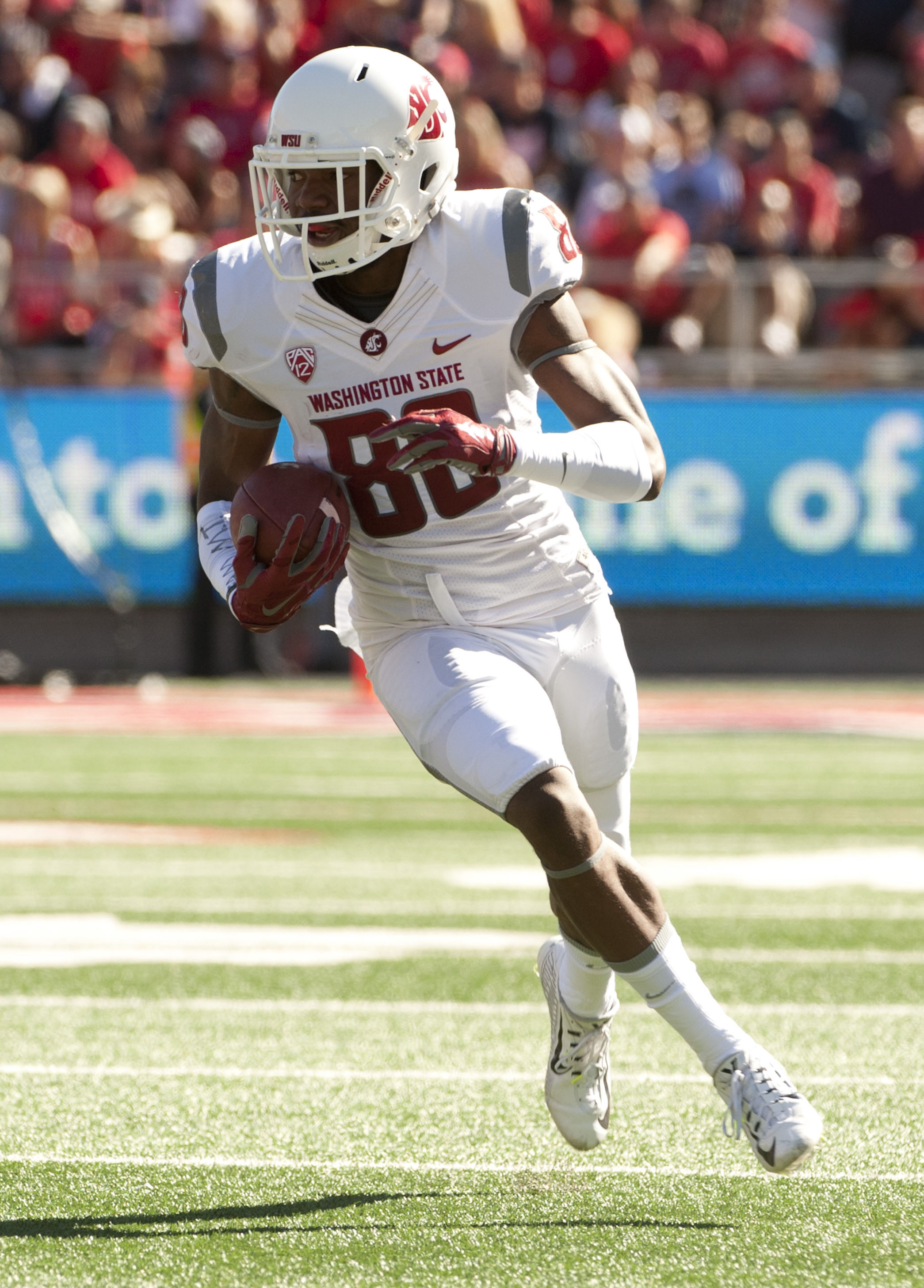 Williams was only named honorable mention for his efforts, an egregious error by his peers, who named Oregon's Darren Carrington to the second team despite a half-season suspension and just 32 receptions for 603 yards and six touchdowns. Decent, but not Dom-inate.

And so you see, despite quietly establishing himself as one of the conference's great receivers and undoubtedly one of the best to ever don the Crimson and Gray — No. 3 all-time in receptions (192), No. 2 in yards (2,889) and No. 2 in touchdowns (30) — Williams finds himself as a fringe receiver in this year's draft class.

It's nothing but another chip on the shoulder for Dom as he enters the NFL Draft.

Measurables | Williams' size will translate well at the next level. There's always room on an NFL roster for a 6-foot-2 5/8, 200-pound receiver with top-end speed and above-average vertical leaping ability.

Williams put on a show at his Pro Day, running the 40-yard dash in 4.39 and 4.41 seconds, which would have been the 2nd best time among receivers at the NFL Combine. His 40 1/2-inch vert jump would have also scored second-best and his 4.21 seconds in the short shuttle would have landed him at No. 11. Not too shabby.

"Williams sports an athletic frame with a well-built upper body and long arms," Rob Rang of CBSSports.com says. "He is quick out of his stance, showing enough agility and strength to fight through press coverage and is a fluid accelerator well suited to the vertical routes so common in WSU's offense. Because of his size, Williams is able to shield defenders from the ball on slants and posts, doing a nice job of hanging on while absorbing a big hit."

Explosiveness | Building on our previous point, Williams' speed and size make him a threat on any given pass play. Time and time again of the course of his career, Williams would abuse opposing defensive backs with his size and speed, creating mismatches with his long frame and putting the burners on when he found space.

Williams' bread and butter is his ability to extend the field and make plays vertically, and while Leach's offense primarily utilizes short, quick passes, Williams made a habit of coming up with the big catch down the field when the opportunity presented itself.

And that's not to discredit his ability to excel in the short passing game, because he proved he was just explosive in that facet, as well.

THAT FADE, THOUGH | That sexy fade. This is more of a bonus category, because it encompasses all of the above, but I'm going to miss it so incredibly much. Say what you want about the goal line fade, but Dom mastered it, and in the biggest moments, too.

Those drops, though | Over the course of his WSU career, Williams had a pretty severe case of the dropsies. According to NFL.com, Williams had a drop rate of 11.8 percent and a total of 20 drops in four seasons.

Leach, like nearly every offensive human being, is firmly on team no drops; it's why you'll see receivers catching tennis balls out of a machine at every practice and tongue lashings on the sidelines after the pigskin met turf.

Dom Williams can catch footballs. We saw him catch 192 of them. Drops are a focus thing with a lot of other little factors involved, like defenders that want you to not catch the ball and what-not. There's not a lot of leeway in the NFL when it comes to drops, because if you can't catch the football, there's someone out there that can. He'll need to clean that up.

Yes, Dom Williams played in the Air Raid offense and he was a damn good receiver in this offense, too. And there's some truth to route-running in this offense, which isn't particularly complexed, and that's where Williams could be docked by pro scouts, with sound reasoning from Rob Rang, of course.

Williams' production is certainly inflated by coach Mike Leach's pass-happy attack and most of his success has come while running a fairly simple route tree," Rang says. "Williams is a little bit stiff changing direction, having to throttle down slightly when making his cuts. He is prone to lapses in concentration, dropping too many "easy" passes."

What we do know, though, is that Dom Williams will be fulfilling his dream and signing with an NFL team in the coming weeks as a two-star, honorable mention wide receiver from a land grant university located in the rolling hills of Pullman, Wash.

Flying under the radar ain't so bad.