A four-year starter, Vaeao could hear his name called late in the NFL Draft.

Destiny Vaeao is a long way from The Rock -- the colloquial name for American Samoa, from which Vaeao hails. As part of Mike Leach's first class, Vaeao was the first in what has become a stream of players recruited to the main land by WSU assistant head coach Joe Salave'a, and Vaeao is truly one of the players who can say he helped the Cougars pull themselves out of the morass of the Paul Wulff era.

And now he's on the verge of potentially getting drafted into the NFL. Here's a scouting report.

Disruption: This is the name of Vaeao's game. His first step is excellent, and he specializes in splitting unsuspecting offensive linemen who aren't quite prepared for his quickness. These two plays are from WSU's win over UCLA. In the first, the right tackle is supposed to shove Vaeao to the inside while the guards sell the play action, but he never has a chance to get there. On the second, he starts shaded on the outside shoulder of the guard and is able to come all the way back inside to split the guard and the center:

It resulted in Vaeao racking up 12 tackles for loss from an interior lineman position, including 4.5 sacks -- and that doesn't really do justice to the number of plays he altered.

But he's also strong: You saw it a little on the second clip above, where he's able to power through the double team. Here he is shoving Stanford guard Joshua Garnett -- who was picked in the first round by San Francisco last night -- back a few yards before shedding him to sack the QB. Ostensibly, power is Garnett's best attribute, and he got put on skates:

He also can hold his ground against the run. Here, you'll see three plays in which he lines up in 3 and 5 technique. I think the second play is my favorite; he doesn't actually make the tackle, but it's him holding his ground that forces Christian McCaffrey back into the hole where the safety is waiting. Remember: Two of these plays are against what was considered to be one of the most powerful offensive lines in the country.

Positional versatility: As a freshman, defensive coordinator Mike Breske actually played Vaeao at his Buck linebacker position - the equivalent of WSU's current Rush backer spot, a hybrid DL/LB role. It seemed odd, and he didn't stay there, but it was a window into the kind of athleticism the coaches loved. He transitioned to defensive end, then defensive tackle. He's played outside, he's played inside, and he was at his most disruptive playing 3 technique this past season for WSU. 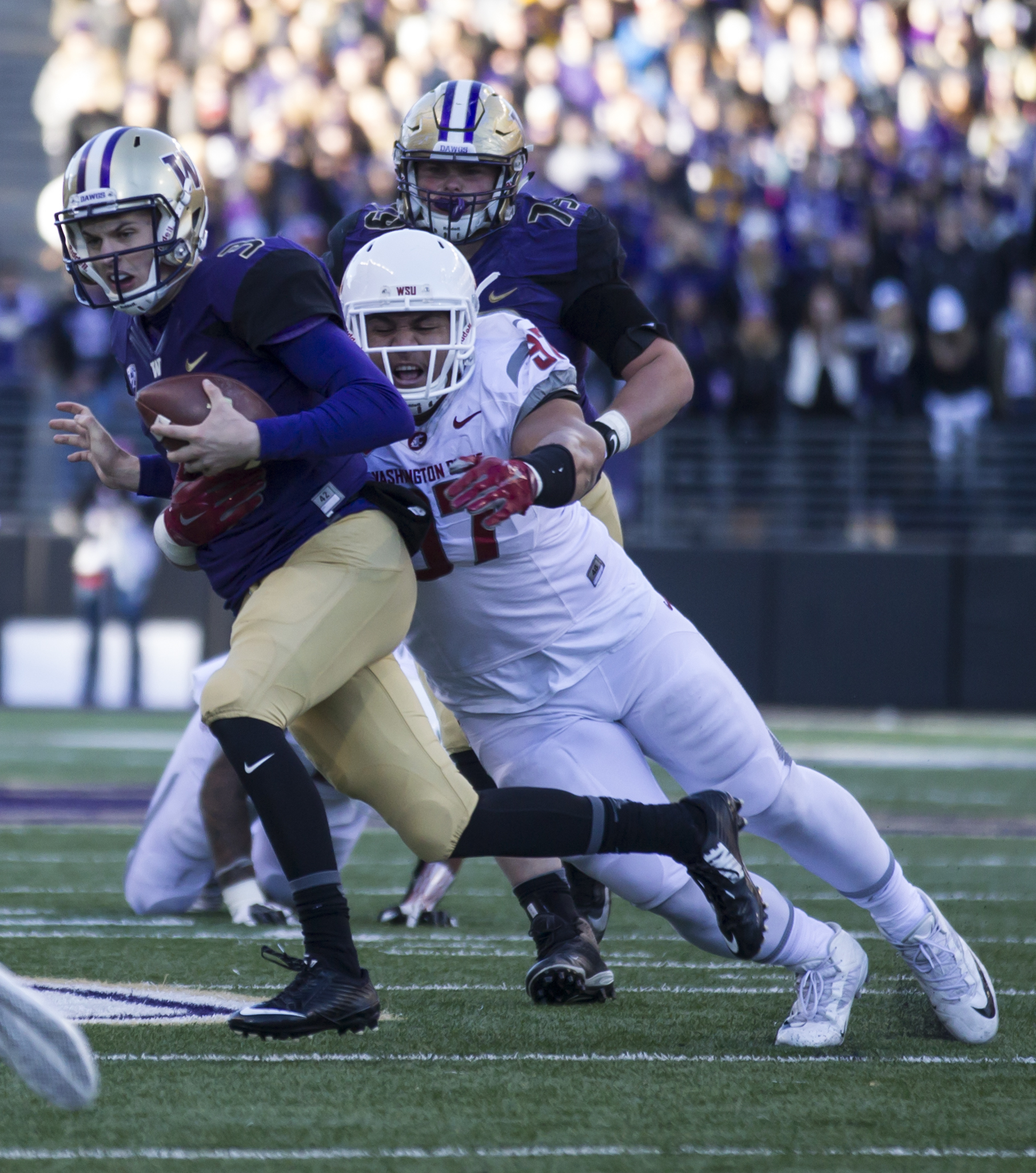 What is he? The versatility is nice, but it's tough to know exactly where an NFL team will see him. Is he a 3-4 defensive end? A 4-3 tackle? A 4-3 defensive end who slides inside on passing downs?

Consistency: Vaeao's production was fairly underwhelming for three seasons, and it was even a bit underwhelming for the first part of last season - just 1.5 TFL in the first four games against Portland State, Rutgers, Wyoming and Cal. Four teams he should have done well against. But he finished the season strong, recording more than half his TFL in the final few games. The guy from Stanford and the guy from the final part of the season can play in the NFL. What about the other guy?

Is the athleticism as good as it looks on video? His pro day numbers certainly won't make anyone sit up and take notice, despite what you see on film. Will the quickness and strength still play against the elite linemen he'll face on Sundays?

Vaeao is considered to be a late round pick or perhaps even an undrafted free agent. What it's probably going to come down to is whether a team A) believes the late season production is the real deal, and B) sees him as a strong fit for its system. The consensus from our perspective is that he's a 3-4 defensive end at the next level, but there certainly exists the possibility that a 4-3 would be interested in his potential as an interior pass rusher.

Like most fringe prospects, someone will need to have a vision for Vaeao and his talent.

Want to get a closer look at Vaeao? Here's some uncut video.