Part 2 in our 3 part analysis of the UW offense leading up to the Apple Cup. Austin Seferian-Jenkins is a big part of the Husky offense and a very dangerous weapon in play action.

In Part 1 we looked at UW's run game. The threat of a running game allows the Huskies to force beneficial matchups in a play action pass, and they use play action frequently. There are three main types of play action; a bootleg - QB rolls to the strong side of the line, typically off of a zone, a "naked" - QB rolls to the weak side of the line with no outside protection, typically off a counter, and a 3-step from the pocket off of any designed run look, including fly sweeps. UW quarterback Keith Price will use all three.

Price is a very capable runner, and highly elusive outside the pocket. UW puts him in a position to get out and make plays. Off of play action, Price has favorably targeted two areas of the field; down the sideline on outs, comebacks and fades, and drag routes rolling across the field with him. Tight end Austin Seferian-Jenkins is the most concerning play action weapon, especially on the goal line. UW's 73.8% red zone success rate is due, in large part to play action and Seferian-Jenkins. 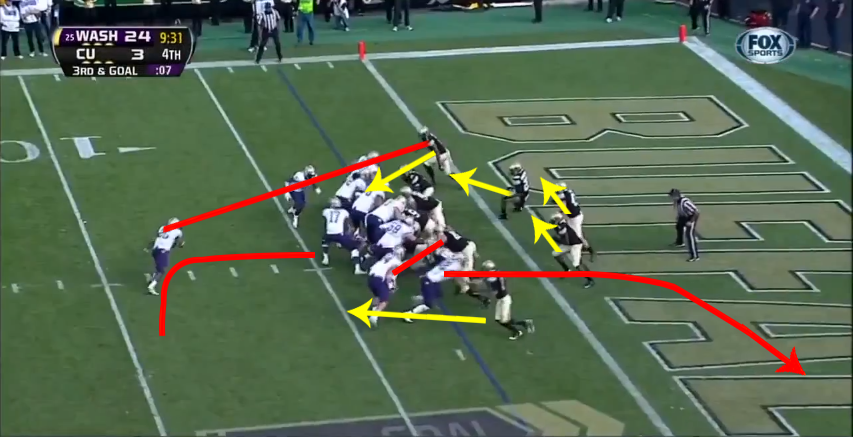 Facing a third and goal, UW lines up in double tight with two wing backs off the line and just outside the ends. Colorado loads the box in a goal line defense. It will be important, very important, to not lose track of who is responsible for Seferian-Jenkins, the matchup problems he presents are large enough without him being uncovered.

Here UW will bootleg out of a zone left play fake, a play fake the entire Colorado defense buys into except for the blitzing corner. Price gets his head around and finds a wide open Seferian-Jenkins.

UW will run Seferian-Jenkins on traditional play action routes from a stand up receiver position, in tight or even at times out wide. Sometimes Price will try to find him after 7-step straight drop in the pocket, giving the big guy time to work down field when a play action is not used. In this play we can see him run a drag as the middle receiver from a bunch formation, Price takes a 7-step drop then rolls out to the right as the pocket collapses. 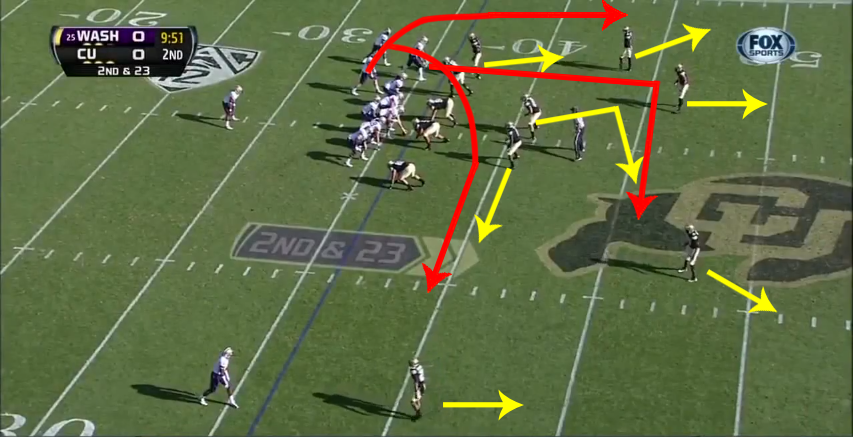 The WSU pass rush cannot allow Price to take long drops and work receivers open. The UW offensive line is not especially strong at pass protection and despite his presumed escapability, Price was sacked 26 times last season and 17 times this season. A strong pass rush by the Cougs up front could limit a UW passing attack that ranks 88th with 212 yards per game.

Colorado defended this particular play pretty well, but Seferian-Jenkins was able to get a step on the linebacker.

Eric Oertel and Cyrus Coen are both fast enough to run with him, but will some good fortune if either is faced with a jump ball situation. If you saw the tail end of UW's game against Cal, you saw how comfortable Price is playing fly-up with Seferian-Jenkins, he is a big bodied, physical target that will battle for a jump ball, a battle he usually wins.

The UW tight end is their leading receiver on the season with 753 yards on 58 receptions, he's also grabbed 5 TDs. Only Kasen Williams has been targeted more with 63 receptions. No other skill player has over 20 receptions except Bishop Sankey (27).

Austin Seferian-Jenkins is not an average tight end, he's one of the best in college football and plays a primary role in the Husky offense, he should be a major point of emphasis for the Cougar linebackers and secondary.