The Huskies don't look much like the team from last year's Apple Cup, as their strengths have flipped.

The Washington Huskies visit the Washington State Cougars on Friday at 12:30 pm PT for the 2012 Apple Cup, and UW is gunning for their eighth win on the back of a surprisingly strong defense. The game will be televised on FOX as WSU tries to pull off an upset and stop a three-game losing streak in the series.

In 2011, the Huskies were all about offense. With Chris Polk on the ground and Keith Price chucking the ball all over the place, Washington was putting up points in bunches. On the flipside, the UW defense was atrocious. These two extremes were best exemplified in a 67-56 loss to Baylor in the Alamo Bowl to end the year.

This season, the roles have reversed. The Husky defense has starred in the team's wins, most notably two Gameday Championships over highly-ranked Stanford and Oregon State. The offense has taken a while to get going. 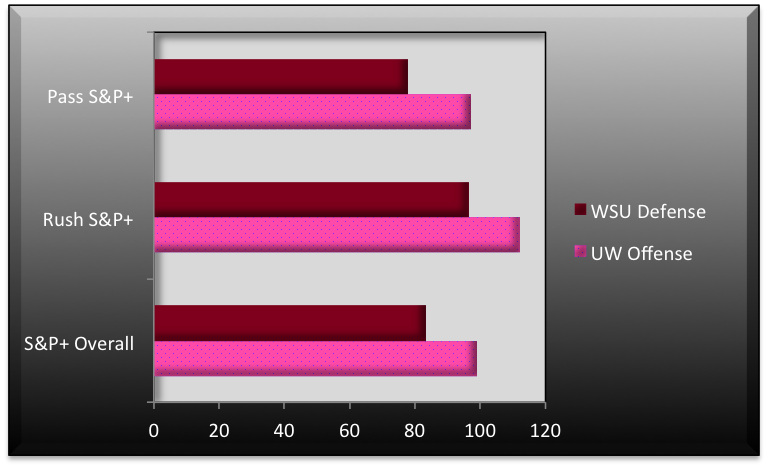 The Huskies have been below average overall this year on the offensive side of the ball. The passing game has been the main culprit, as Keith Price has struggled to match his breakout sophomore season. The quarterback has nearly the same pass attempts as last year (362 to 359), but the production has been markedly different.

Price's yards per attempt have dropped from 8.5 to 6.4. His completion percentage is down to 62.4 from 66.9. He has thrown less than half the touchdowns (16 vs. 33) while throwing only one less interception (10 vs. 11). It's been a disappointing season for Price, but he has shown some signs of life recently.

The junior completed 73 percent of his passes for 277 yards and two touchdowns against Utah, then followed that up with 76 percent, 248 yards, and five scores against Colorado.

Perhaps some of that improvement has come as defenses have focused on the running game and Bishop Sankey. The Husky rushing attack has been 12 percent better than average over the course of the season, and the former WSU commit is a big reason for that.

The Cougar defense has been at its best when it plays one-dimensional rushing attacks. If WSU had faced Washington one month ago, their chances of slowing down the Huskies might have been a little better. But now the Huskies are clicking, no doubt helped by some weaker competition, and that is exactly what the Cougars are.

With Travis Long likely out, the best part of the WSU defense took a big hit. It's going to be a lot harder for the Cougs to control the line of scrimmage to apply pressure on Price and limit Sankey.

UW's offense has performed much worse on the road, so Washington State fans will have to hope that trend continues. 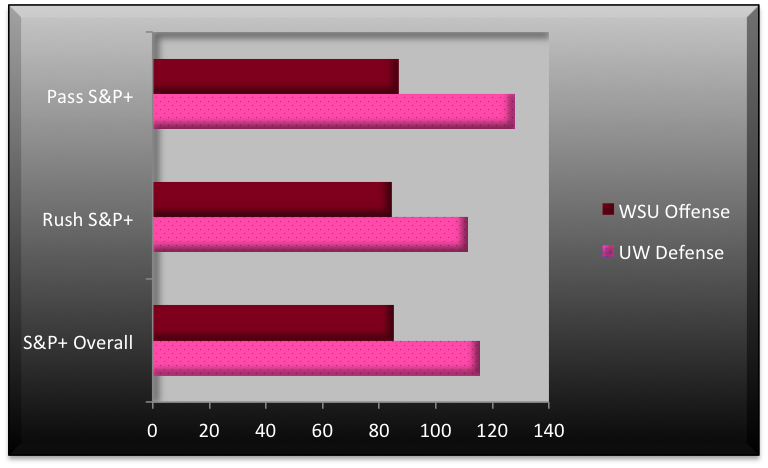 The turnaround from the UW defense has been nothing short of impressive. The Huskies have moved from 93rd in S&P+ to 22nd. They have went from 11 percent worse than average to 16 percent better.

The shedding of Nick Holt for Justin Wilcox seems to have had a positive effect, but UW has also benefitted from the services of some new talent on defense.

Safety Shaq Thompson and linebacker Travis Feeney have made immediate impacts as freshmen. Thompson is fifth on the team in tackles with 58 while tallying 7.5 tackles for loss and three interceptions. Feeney has logged 62 tackles, four of which have been sacks.

Improvement from the returning group has helped as well. Sophomore linebacker John Timu has emerged as the team's leading tackler, while cornerback Desmond Trufant is performing a heck of a lot like his brother on the outside.

The Huskies haven't put much pressure on opposing defenses, with just 22 sacks overall and one for every 15 pass attempts. Teams have also been strangely run-heavy in general against the Huskies.

Even without the rush, UW has been excellent in defending the pass. They are 18th-best overall at 23 percent better than average. Quarterbacks are completing just 52 percent of their passes and have thrown 15 interceptions to just 14 touchdowns against the Huskies.

That doesn't bode well for an obviously pass-heavy WSU offense.

However, Jeff Tuel has shown the ability to find open receivers when he isn't running for his life, so hopefully the Cougars offensive line is toughened up from the string of brutal defensive fronts they have faced and are ready to block well.

Washington is obviously the favorite to win this year's Apple Cup, but they still have their weaknesses. WSU has upset the Huskies as double-digit underdogs before, and they will have to do it again on Friday. The Cougars will have to bring a special effort to finish the year on top, and hope Washington continues their lackluster road play.

It is a rivalry game after all, and anything can happen.