Apple Cup 2012: Time for Baxter's beer of the game

Baxter the Pekapoo knows the Apple Cup is getting an early start at 12:30 p.m. PT, so he went with a beer that can last all day.

Share All sharing options for: Apple Cup 2012: Time for Baxter's beer of the game

Baxter isn't all that excited for the 2012 Apple Cup. It's not that he doesn't love the Cougs, it is pretty obvious that he does. Look at that adorable picture above.

I would tell him all of this, but he is a dog. He doesn't understand English, silly.

As for the beer, Baxter went with another Vermont selection this week, and he strayed away from the ales we usually drink. Today's beer is a Dunkel Lager made by Trapp Lager Brewery.

The Trapp Family Lodge sits near the Stowe ski resort village in the Green Mountains of Vermont. The Lodge is actually ran by the Von Trapps made famous in the musical and movie The Sound of Music. The beer is brewed by a direct descendent of those little kids, and some of them still roam around the grounds. The beer can be found on draft at many places in Vermont and I picked mine up in a growler at the beverage store down the street.

The best place to enjoy Trapp Lager is at the Lodge itself, as they offer some beautiful views and delicious Austrian-inspired deli food. 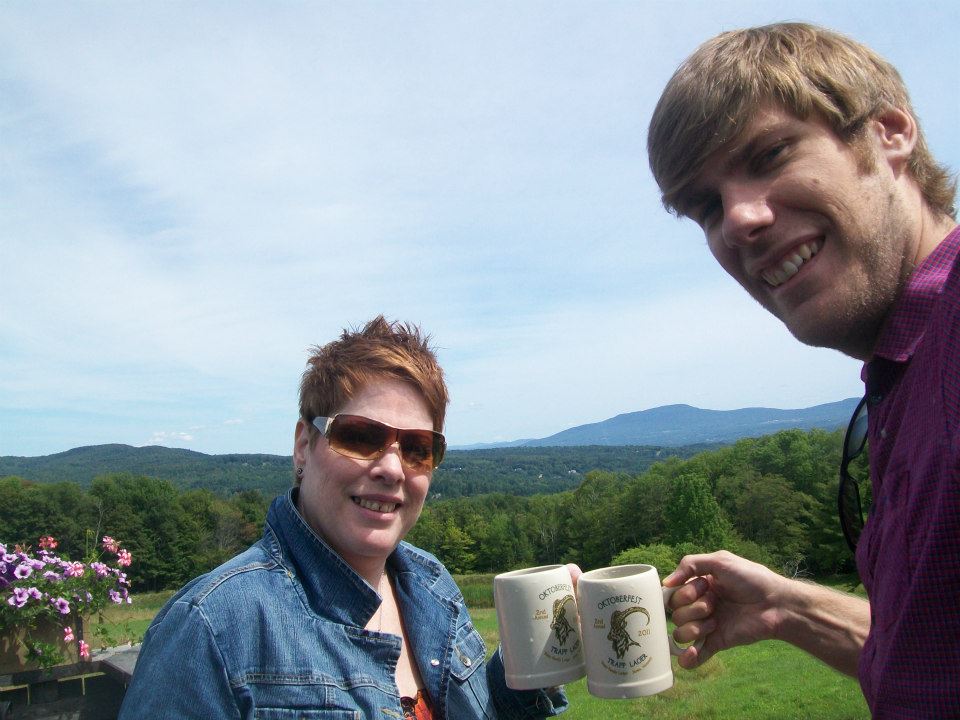 My mom and I enjoying some Trapp Lager at the Lodge

I typically don't pick lagers, because I typically don't like lagers. They don't have the intense flavors that come from ales (stouts, IPAs, ambers, etc). The process for making a lager is different, and more difficult than ales. There is a different type of yeast used, it is fermented at colder than room temperature, and it takes longer to ferment. Because of all of this, you won't see many craft breweries take the time to produce lagers.

So many of the lagers that hit the market are poor quality. They are those beers that you drink in pitchers on Saturday night when you are at the Coug. They taste bready and skunky. They are more vessels of drunk delivery than something to be enjoyed.

But when a brewery wants to take the time to craft a fine lager, they can be excellent. Trapp does just that.

Dunkels use dark roasted malts, and that is why the lager you see in the picture above isn't clear and yellow like the ones you may be used to. Lagers are typically more balanced and refreshing than ales, and the hops nor the malts will jump out at you. They are also lower in alcohol, so perfect for a tailgating day that starts early in the morning.

Craig's review: I actually picked up two of these growlers of Trapp Dunkel Lager, and enjoyed one of them on Thanksgiving. The aroma is sweet and fruity. The initial taste comes from the roasted malt, and has some sweetness to go along with a subtle coffee/chocolate quality.

The beer finishes clean with just enough hop presence. The carbonation gives it a crisp feel in the mouth, and it is definitely something that is easy to put down.

Trapp has really opened my eyes to the world of lagers, and I now actually am willing to try them. Before, I would avoid them like the plague (you can blame the good folks at those big breweries in St. Louis and Milwaukee for that).

Baxter's review: This beer is my favorite yet. It was super yummy and I licked it right up. I can't wait for this week to end, all this dog-hating is making me worried.

That is what Baxter and I will be enjoying for the Apple Cup. What will you be having?