2012 Apple Cup: That was for Travis Long

Washington State was playing for a lot of things on Friday. But most of all, they were playing for Travis Long.

Share All sharing options for: 2012 Apple Cup: That was for Travis Long

That was for Travis. That Apple Cup win, the comeback, the celebration: It was for Travis Long. The Cougars weren't just playing for pride and trying to beat their rivals; they were laying it on the line for a guy that's done so time and time again, a player who had started every single game of his career.

In a cruel twist of fate, the one game Long was unable to suit up for the final game of his career, for Senior Day, for his last Apple Cup. A knee injury suffered against Arizona State left him hobbled, then on crutches. His family, his team, had to take care of business for him, because he couldn't do it himself as he had time and time again over the last four years.

Travis Long is the heart and soul of this team, the vocal leader on the field, the sidelines and in the locker room. He's been a damn warrior, playing through pain and injuries without complaint or excuses. If you were building a model player, it would just be Travis Long. No other parts are necessary.

It's been a difficult season for Long, who, like Jeff Tuel, expected big things this year. Adversity? He's powered through plenty of it. But as the year was winding down and the clock was ticking on his college football career, the emotions poured out. There were tears after the Cougars were officially eliminated from bowl eligibility. As the defensive linemen faced the media together following the Utah game, it was too much for Long. He wiped his eyes and walked out.

It was difficult to watch Long, tears streaming down his face and overcome with emotion, crutch out of the tunnel last on Friday. I felt for him. I know how much he wanted this, how much he wanted to go out with a bang. It was gut-wrenching to realize he wouldn't be able to play in front of the home crowd one more time.

Even if he wasn't on the field with his teammates, they carried his spirit, taking the torch and playing like Long would've played. He exemplifies the "never quit" mentality, putting forth the maximum amount of effort every snap. The Cougars didn't quit on Friday, and Long was on their minds the whole time.

"I said to the guys, if you have anything holding you back this year -- mentally, whatever -- just let it go this game. Don't think about anything and just let it go," Jeff Tuel said after the game. "Another theme ... we were just playing for Travis, honestly. We knew he would be out there and we wanted to win it for him. We had a lot to play for, honestly."

Long's replacement, Logan Mayes, played with his hair on fire, spending much of his day chasing Keith Price around in the backfield. It was Mayes who wrapped up Price on the Huskies' first play of overtime, forcing a poor attempt at a shovel pass that landed in the waiting arms of Toni Pole. Mayes has been Long's understudy, and spoke of the impact the senior BUCK linebacker has had on the team.

"He works the hardest out of anyone and has the greatest passion for the game that you've ever seen," Mayes said of Long. "We won the game and we handed him the trophy. That's all we wanted to do."

The tributes to Long were everywhere, especially on the defensive side of the ball. On one arm, nosetackle Ioane Gauta drew an 89 in marker, a reminder of who he was playing for. Fellow defensive lineman Xavier Cooper hustled off the field right after the game, running into the locker room to get Long's jersey. The team couldn't find Long in the herd of people. but seeing Cooper bounding out of the tunnel with a big smile on his face, carrying Long's jersey onto the field before the Apple Cup trophy presentation, was a sight to behold.

And though Long didn't make it to the stage, his jersey did. 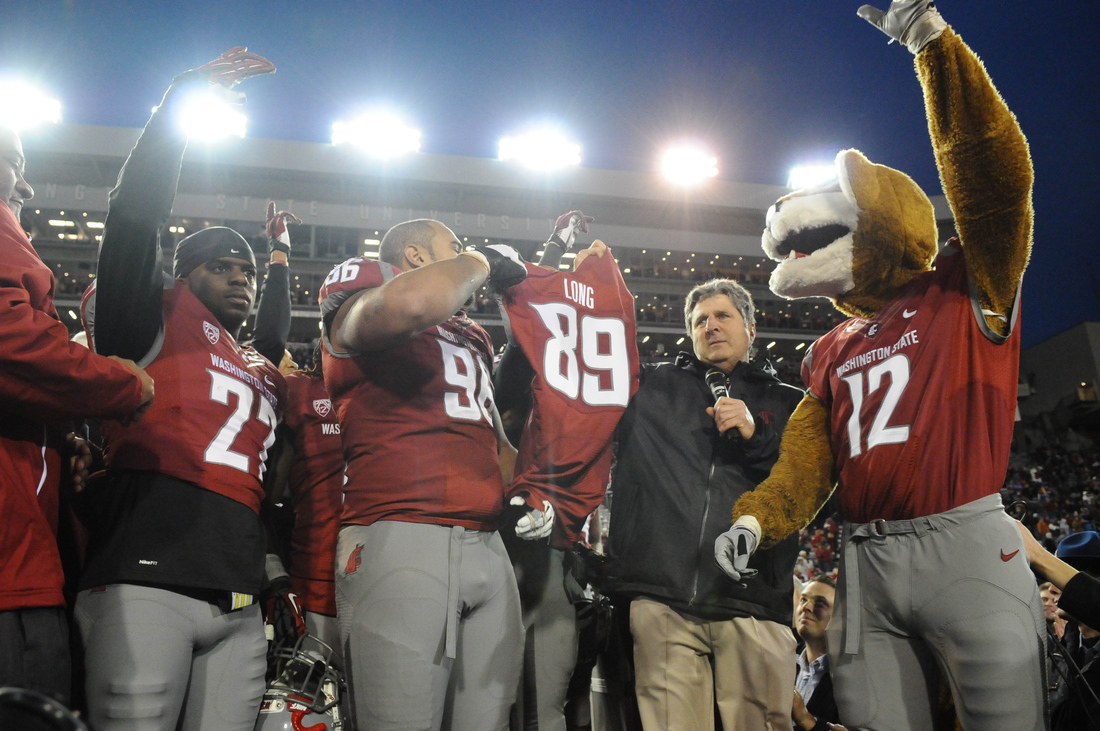 You want a model of the mentality Mike Leach wants to see from his team? It's Long. He's stood out as the Cougars struggled, never getting down and never giving up.

"Travis has really been a solid piece of our foundation here," Leach said. "Travis has been kind of outnumbered at times with the mentality that's needed to win and play this game. So I think he's been a really good example and I think over the process of the season, more and more people have jumped on board with the same mentality Travis has. "

I'm going to miss watching Travis Long lay it all on the line every week in a Washington State uniform. He's a special player and a great person. And though it was heartbreaking tears in his eyes as he crutched onto the field one last time, the impact he made on his teammates and the fans was clear as day.

That was for Travis. He earned it.

Thank you for the win fellas #GoCougs instagr.am/p/SZLgnwFpKU/ 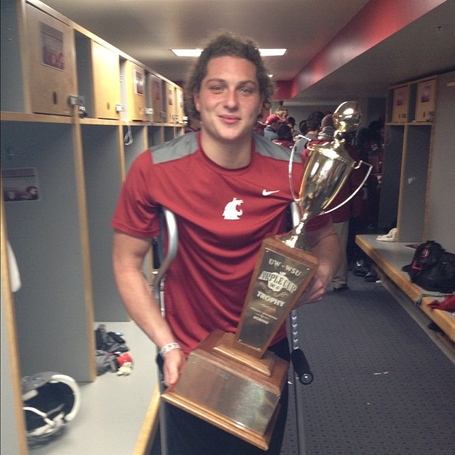