It wasn't flashy, but Carl Winston had himself a game on Friday.

Carl Winston saved his best for last. Maybe the Apple Cup wasn't his best game from a statistical standpoint -- 12 carries for 27 yards, an average of 2.3 yards per carry and a long of six. But Winston had an impact on the game that will be remembered, and he played a key role in the Cougars' win.

It wasn't the yards or the number carries for Winston. It was what he did inside the five -- inside the two, really -- that stood out. Plunging into the end zone from a yard out doesn't seem like much until you remember how much the Cougars' have struggled deep in the red zone all year. We've seen them try just about everything to punch it in, but with an anemic run game there's been more bad times than good.

Yet there was Winston, in his final game in a Washington State uniform and final Apple Cup. He accounted for 18 of the Cougars' points and all three touchdowns. Without his efforts, I'm not so sure Washington State converts each of those drives for touchdown. After all, we've seen this story before, and it usually ends with a field goal.

Three times. Three times Winston and Washington State went straight at the Washington defense. Three times they emerged successful. It may not have been pretty or particularly dominant, but Winston muscled his way through a sea of bodies and into the end zone.

The elder statesman of the bunch, Winston found himself in a logjam of running backs, typically playing second-fiddle to Teondray Caldwell -- though Caldwell missed time with an apparent head injury. Through it all, though, Winston has kept his head down and kept plugging away, doing all he could to help the team. He's quiet, on and off the field, but he leads by example.

On Friday, Winston set the tone. As he plowed into the end zone for the Cougars' first touchdown, you knew it was game on. There's something about the mano-a-mano battle in the trenches at the goal line, and it has a way of igniting either team, depending on who wins. A goal line stand swings momentum and gives confidence, while the offense punching it in is a display of power and a signal that they wouldn't be pushed over.

When we look back on Friday's Apple Cup, Winston will stand out. As far as the scoring goes, only he and Andrew Furney accounted for the Cougars' 31 points (Edit: Forgot about the two-point conversion, which Brett Bartolone converted). And while Furney may get the headlines for his fourth-quarter, game-tying field goal and the game-winner in overtime, Winston quietly went about his business.

The fact that Winston flew under the radar isn't surprising -- he's always been that way. He was never one to be vocal in the media -- his comments about desperately wanting to beat the Huskies were the most emotion I've seen from him -- and he didn't necessarily stand out above a crowded stable of running backs. But Friday was his moment, and he made the most of it.

After the game, Winston soaked in the scene as fans descended on the field. Winston was the center of attention, and fans were giving him his due.

"It was so many people yelling, I couldn't understand half of the things people were saying," he said before smiling. "But I know it was good things."

But most importantly, Winston found his mom. Or, more accurately, she found him. Mothers have a way about them, you know. 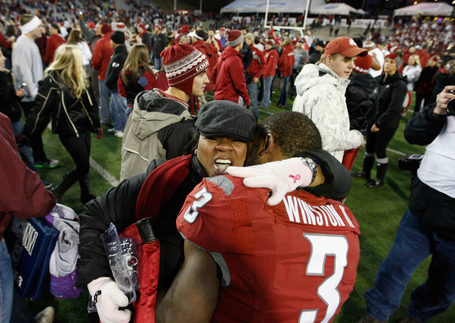 "I found my mom. My mom ... she seems to be a velcro," Winston said. "She's out there on the field and we had a very emotional moment -- hugs and kisses. It was great."

As Apple Cup week began, Winston reflected on his time in Pullman, praising the fans, the university and Pullman. He said he was thankful for the coaching staff, wishing he was able to spend more time with them. In just the past year, Winston said, he learned a lot from the coaches, and only wished he had more time to keep soaking in information.

After the game, Winston reflected on what just happened on the field, wondering what the Apple Cup win might mean for the program as a whole.

"It's tough, but the good thing is I can say that I helped start it. I love Pullman, I love WSU football. It's a real emotional day for me, but I'm not really the type of guy that cries or anything," Winston said. "It's real emotional. I had a couple breakdowns this week, like 'man it's my last game.' It goes by fast. Four years goes by fast."