March is the best. Why not enjoy a beer specifically brewed to be consumed during the month of madness?

Share All sharing options for: March Madness 2013: Baxter's Beer of the Game(s)

Snow has fallen on the hills, valley, nooks, crannies, and everywhere else in Vermont this week. In fact, it is snowing right at this moment. Didn't spring start yesterday?

Baxter is a pretty big fan of the snow, even though it clumps up in his fluffy mess of hair. He likes to eat as much as possible and frolic around like a deer. What a weirdo.

Of course, Baxter's roommates have grown tired of the winter weather, and aren't quite as excited to go wandering out in the cold and wet. Unfortunately for Baxter, he is entirely reliant on his roommates to go outside, because he lacks the height nor the opposable thumbs to open doors. Life is hard for a 12-pound pekapoo sometimes. 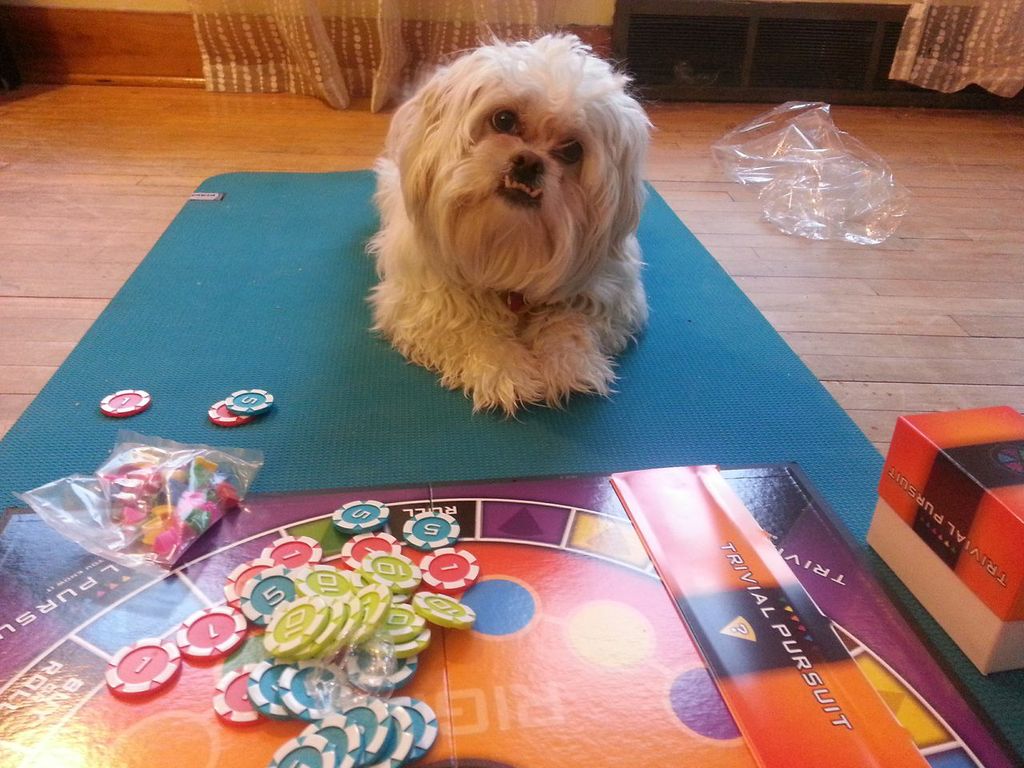 Baxter tries to understand the directions.

So Baxter spent a fair amount of time indoors this week, and even partook in some board game action. Once again, he was put at a disadvantage. Trivial Pursuit is difficult for someone who can't speak or understand more than a few words of English, even the dumbed-down "Bet You Know It" version. You have to commend the little guy for trying, though.

Luckily for Baxter, staying inside got a lot more exciting on Thursday when the first of the best two days of the year brought 13-straight hours of college basketball. He's a huge March Madness fan, and he wanted to commemorate the event with a beer that in unique to the month of March. What better than a beer than has to be consumed by the end of the month?

Stone makes a series of Double IPAs called "Enjoy By" that come with a specific date that the beer is set to "expire." Despite the hops role as a natural preservative in beer, hoppy beers are often better fresh. Stone takes the guesswork out of it by putting the "Enjoy by" date in big bold font right on the label.

The freshness of the beer is evident in the aroma as piney hop aroma fills the nostrils. The beer comes with a high ABV at 9.4 percent, but it does so without the taste of alcohol or overbearing malt sweetness. The beer is well-balanced for a Double IPA, and it has a complex set of hop flavors. The end is the best part for any hophead, as the bitterness comes roaring in to finish off the taste.

Overall, an excellent beer that delivers on its promise of fresh taste. The "curator" at the beer store said this will come around once a quarter, so I will eagerly anticipate its arrival in a few months.

There is so much snow outside. Did you know you can catch a snow ball, but it break up all over the place? It's really hard to recover after that, and you just end up eating way too much snow to try and get it back.

Anyways, the beer! Not a big fan of hop-bombs, but I enjoyed the beer anyway, just like the label says. The bottle was excellent to curl up with in my bed, but Craig took it away. Said something about it needing to be refrigerated. Whatever, he's just mad because I smoked him at bright-color floor game earlier this week.

It's a long day, so more than one beer will be needed. I was lucky enough to secure some Alchemist Heady Topper this week (it's next to impossible to get) and that will keep me and Baxter going throughout the day.

What beers have you been enjoying lately? And what will you be pairing with March Madness?