USC vs. WSU basketball: Baxter's beer of the game

The Trojans visit the Cougs at 3:30 p.m. PT Saturday on Pac-12 Networks. Come discuss beer pairings for the game with the internet's most adorable beer expert.

Share All sharing options for: USC vs. WSU basketball: Baxter's beer of the game

The sun is out in Burlington, but the temperatures are still not high enough for Baxter. He and his best friend Boycat have taken to laying around in any slit of sunlight they can find on the cold hardwood floors of our apartment. They've spent the morning moving about, searching for a spot big enough to share, leaving the bed they typically battle over empty.

There is hint of spring poking through the clouds, but the just-above freezing temperatures are allowing snow piles to linger in the shadows. To honor this transitional period, Baxter sent me to grab a beer that could combine some of the best of both seasons. What better beer to that than a Black IPA (or as I prefer to call it, a Cascadian Dark Ale)?

CDAs typically have the floral aroma of an IPA (like spring!) combined with the dark roasted scents and flavors of a porter (like winter!). This week's beer comes from Zero Gravity Brewery in Burlington, VT. Zero Gravity is located inside an American Flatbread restaurant, which serves up some excellent and unique pizza. 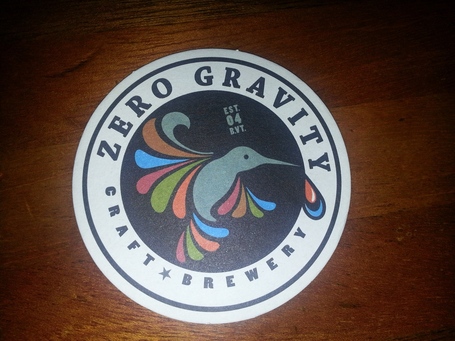 Narconaut Black IPA is a rotating beer in the taproom at American Flatbread with a standard 6.5 percent ABV. It's available to take home in growlers (as you can see above). Until recently, the only place to get Zero Gravity's brews (which are rated on Beer Advocate as "world class") was at the restaurant. Fortunately for the rest of Vermont, the good people at Lawson's Finest Liquids have helped Zero Gravity distribute their beer beyond Burlington.

The taproom is still the best place to get the beer, primarily because of the assortment of tap handles. Bartenders are challenged to remember a series of odd tools, as the handles include things like hammers and sticks. Narconaut was served via some sort of round rock-looking object with a piece of wood embedded in the side. There are no names written on the handles, making the givers of beer that much cooler.

Perhaps my favorite part of of Zero Gravity is their hummingbird logo. It fits well, as hummingbirds look like they are floating in the air. The best way to see the logo is on the coasters at the taproom, with all the colors in full glory.

The aroma is dominated by the hops at first, with a floral and piney scent. At first sip, the roasted malts hit, giving it a nice coffee flavor. Eventually the bitterness from the hops come in to finish the beer. It is clear that there are plenty of varieties of hops used in brewing, as the hop flavor is ever-changing subsequent drinks are taken.

An excellent version of the style, which tends more towards the hop flavor than some other CDAs/Black IPAs. As is typical of Zero Gravity, it was light on the carbonation, which I prefer. I look forward to taking on the whole growler while I watch the Cougs and Trojans do battle.

My sun spot keeps moving. I don't understand why it can't stay still. Craig interrupted my quest for warmth by shoving another glass of beer in my face. It smelled nice, and there weren't as many bubbles going up my nose. I like the flavor, especially at first. I'm really starting to like this beer thing. Hopefully I get to go outside later.

Maybe if I get my butt off the couch, I will take Baxter out. But there is a lot of college basketball on today. What will you be having as you watch the Cougs, or what beers have you been drinking lately?