WSU vs. Auburn football: Baxter's beer of the game

Baxter has a beer that traveled all the way from his home state for WSU's season opener.

Share All sharing options for: WSU vs. Auburn football: Baxter's beer of the game

There is no doubt about it. Coug fans love their beer. They love it so much that they drink all the airplane bottles on the way to Las Vegas and dry out all the kegs in Auburn. With that in mind, Baxter debuts his beer column for the 2013 season.

Bax has been saving a special beer for WSU's season open. My dad sent us a six-pack of Bale Breaker Field 41 Pale Ale from Moxee, Wash.--the heart of Yakima Valley hop country--earlier this summer. We've enjoyed a few out on the porch, but have saved some for the Cougs' debut. 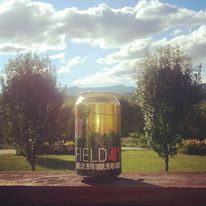 Bale Breaker is new to the craft brew scene, but the family that runs the company is far from new to beer. The brewery was built on a commercial hop farm, and the hops used from the beer come straight from that farm. Can't get any fresher than that.

Because of its tie to the hop industry, Bale Breaker leans towards hoppy beers. It cans two brands at the moment--Field 41 Pale Ale that I mentioned above and TopCutter IPA. Field 41 is heavily dry-hopped to give it all the wonderful aroma of a hop field without the assertive bitterness--so don't be afraid if you are weary of hops.

The aroma of the beer is enticing. Hops are certainly the star, but there is enough malty sweetness to balance the flavor well. Field 41 finishes clean with a bitterness that doesn't overpower. An excellent beer to sip on a sunny day (or while watching football inside).

Never a fan of the smell, but I love it when Craig gives me a taste. I lapped it up quickly and immediately asked for more. Four paws up (as long as someone holds my while I attempt that).

So, that is what Baxter and I will be enjoying as the Cougs open up the season. What will you be having?