Baxter's beer of the game: WSU vs. Stanford

I took a trip out West without Baxter and brought him back some delicious beer from Central California.

Share All sharing options for: Baxter's beer of the game: WSU vs. Stanford

Baxter has taken three weeks off from his beer column, but that wasn't intentional. Sure, I happened to be in California for the past three Cougar football Saturdays while Baxter was back at home in Vermont, but I figured Bax could handle the posts on his own. Turns out, Baxter has been keeping a secret from me this whole time.

My favorite little pekapoo is illiterate.

I know, it's shocking news to hear. I've always transcribed for Baxter, but the thought never crossed my mind that he couldn't do it himself. Not to worry though, I'm hard at work making sure Bax can read and write as well as the world's smartest dogs.

As I was away from Baxter, I took some time to visit my mom in the small town of Coalinga, Calif. There isn't much in Coalinga, but that's okay. Why? Because just over an hour away in Paso Robles is one of the most highly-regarded breweries in the world: Firestone Walker.

Needless to say, I forced my mom and her fiance to accompany me on a trip to the brewery. We enjoyed a delicious lunch in the taproom and made sure to sample a wide variety of beers (in the process I converted the other two into craft brew fans): 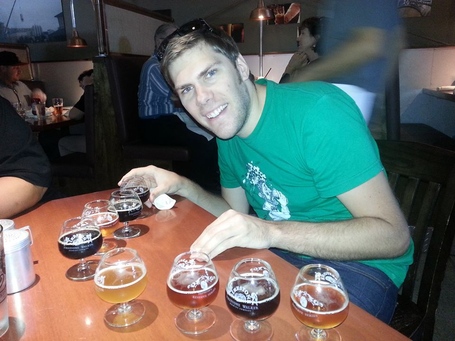 One of the beers I was most excited to try was Firestone's Double Jack. It's a double IPA, one that many of the West Coast beer snobs I come across hold in high esteem. DIPAs are my favorite variety when they are done well.

Over the last two years, I've become a bit of a homer for Vermont double IPAs. With Heady Topper, Lawson's Double Sunshine, and the many offerings from Hill Farmstead, it's DIPA heaven in the Green Mountain State.

Prior to trying Double Jack, the only DIPA I had tried that lived up to my Vermont favorites was Pliny the Elder from Russian River Brewing.

After trying it, Double Jack is now up there with the Heady Toppers and Plinys of the world, and is the best widely-available double IPA I've ever had (Heady Topper has about a 35-mile distribution radius and Pliny is still tough to come by).

I brought back some to share with Baxter. Sadly, Double Jack isn't distributed in Vermont. I'll have to take a few drives over to New York or Massachusetts to procure my next batch.

Craig's Review: I prefer DIPAs that are heavy on citrusy hops to create a sort of "juicy" feel. One of the best examples I've seen of this is Double Sunshine.

Double Jack is similar, but with a bit more malt character. The result is a slightly sweet beginning finished off by a bitter-but-not-too-bitter finish that lingers in the mouth. The aroma is wonderful, with citrusy and piney hop dominating. I love this beer. As balanced a flavor as DIPA should have.

Baxter's Review: I'd like to start by saying I apologize for deceiving all of you for so long. Craig is right, I cannot read or write. But I am working on it. And delicious beers like Double Jack are a great motivator (I wouldn't want to accidentally buy something else)!

The taste was yummy and sweet and delicious and I want more.

We will be pairing the beer with a boat-load of junk food. Nothing like a healthy college football watch-a-thon. That's what Bax and I are having, what will you be enjoying as you watch the Cougs take on Stanford in Seattle?