The Rams bring a stud running back into the New Mexico Bowl on Saturday. What kind challenge does Kapri Bibbs present, and how will WSU try to defend him?

This Saturday, in the high Chihuanhuan Desert of the American Southwest, the Cougs of Ol' Wazzu will take the field against the Colorado State Rams for the final game of the season. The Gildan New Mexico Bowl will be the latest in the calendar year a WSU team has played a game in a decade. For a season that was, at the onset, considered to be another boring block in the rebuilding process, the 2013 Cougs have already accomplished a great deal for themselves, and us fans, to be proud of.

Bowl games can offer a unique destination, fantastic recruiting advantages, lavish gift packages for players, and elaborate festivities during the week. But more importantly than the fun tidbits, your team is playing an unfamiliar opponent.

Let's get to know these Rams from Fort Collins a little better by first taking a look at what they are best known for: Running the ball.

Following three consecutive 3-9 seasons from head coach Steve Fairchild, Colorado State went and got Jim McElwain, who was at the time offensive coordinator for the Alabama Crimson Tide, to turn their program around in 2012. McElwain ran the offense for Nick Saban during Alabama's championship runs in 2010 and 2011, and he was expected to bring-in a similar pro-style to Fort Collins. 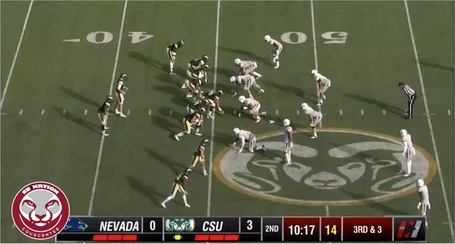 That's not exactly what happened.

McElwain hired Dave Baldwin to be the offensive coordinator and quarterbacks coach. Baldwin is a Denver native and played QB for Grenada Hills (Calif.) just before John Elway. In his early coaching career, Baldwin coached under John's father Jack, following him to Cal State Northridge, San Jose State and Stanford before meeting up with McElwain for a stint at Michigan State, where he coached Drew Stanton to the NFL. Under Baldwin, CSU has notched three games of 50+ points (a school record) and is on pace to finish with the second-most average yards per game total (447.3) in school history. This year has earned Baldwin a nomination for the Broyles Award, given to the top assistant coach in college football.

The Rams will execute traditional pro-style pass concepts and run plays, but utilize pre-snap motion in a fairly unique way that makes it difficult to align a defense to the power of their formation. 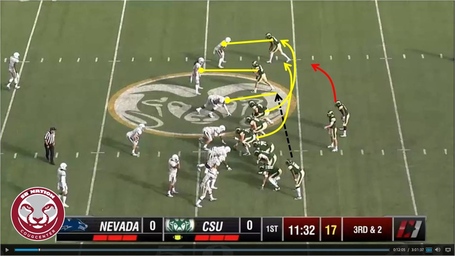 This is the predominant formation CSU likes to show. It's a twins concept, with a TE/WR type player at what's close to a Wing T alignment. Two receivers are to the weak side of the formation (against a pro-style offense strength is usually assigned to the side with the tight end) and the quarterback calls for motion before the snap (dotted black lines).

The center and playside offensive tackle pull, blocking the toss sweep like a counter run. The two become a formidable lead-blocking tandem. CSU runs a toss sweep pretty regularly, either blocking it like shown above, or the more standard way by having lineman slide to the side of the toss, and the end will either "reach-and-hook" if he has leverage to the outside or "kick-out" if he has inside leverage. ("Reach-and-hook" turns the defensive end inside and sets the edge, while a "kick-out" drives them to the sideline.)

By the end of the game Kapri Bibbs racked up 312 yards against the Wolfpack.

This isn't a revolutionary blocking scheme -- it's basically a variation on the old "Packer Sweep" taught by Vince Lombardi -- but it's as effective as ever. The crack block on the Nevada defensive end is crucial here, and it will be against the Cougs. WSU Bucks Kache Palacio and Destiny Vaeao cannot let them set an edge like this. Other teams, especially ASU, had a lot of success against WSU by getting to the edge. The Cougs can't let Kapri Bibbs get outside or he's sure to find some success as well.

It's not simply pre-snap motion WSU will have to deal with; the Rams almost invariably change the strength of their formation before the snap. They rarely huddle, more just stand around and receive orders from the quarterback. Typically, what they initially show won't be the formation they're in when the ball is snapped.

Here is how they line up after a previous play; this formation is a favorite. 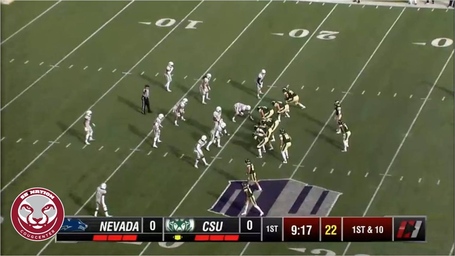 After getting the call from the sideline, quarterback Garrett Grayson orders a shift. 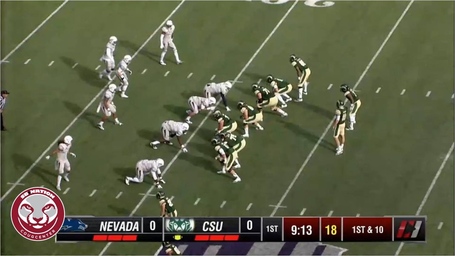 The pass play breaks down, but this is more an illustration of the type of alignment shift you can expect on the majority of Ram offensive plays.

Why would an offense do this? To gain a match-up advantage against defenses that aren't ambidextrous. The corners and safeties for WSU play with field or boundary (closest to the sideline) responsibility, so they won't be affected by a change in formation strength, but where WSU deploys the Buck could be.

The Cougs have recently favored playing both Palacio and Vaeao against teams with great running backs, and would be best served by doing so again this Saturday. It would be hard, if not impossible, to always have the Buck on the side of formation strength in their traditional 3-4 role against the Rams. Even though CSU doesn't exactly push tempo with their shifts, it's still asking a lot to have your big backer to run across the formation nearly every play. Having both Bucks on the field, who could just switch responsibility if the formation changed, would save some energy and guarantee correct alignment at the snap.

Some of these alignment shifts result in unique formations, like this, where an offensive tackle is split out wide, all alone. 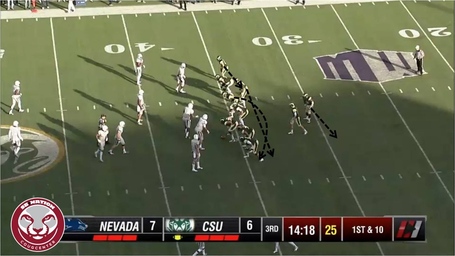 Outside of PATs, these formations are about as unbalanced as you'll see in football. "Balance" meaning the number of players on either side (right or left) of the ball (center). 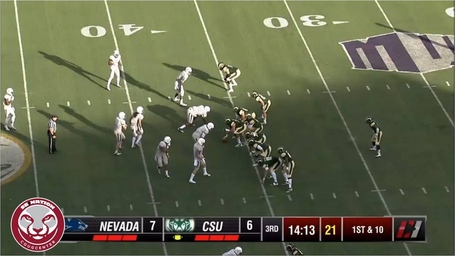 Understandably, Nevada isn't entirely sure what to do with their own alignment against this formation that swung formation strength from the right to the left in about four seconds, then snapped it in the next two. Bibbs cuts up off a great kick-out block and trips over the painted yard-line trying to angle back against the safety.

Bibbs is a truly great college running back. He's 12th in the nation at 120.92 yards per game, and with 1,572 yards this season, Bibbs only needs 30 yards against WSU to set the single-season rushing record at CSU. He has scored more points this season than four FBS college programs (Miami OH, UMass, FIU, USF), and leads the nation in rushing TDs with 28.

Bibbs is extremely patient behind the line of scrimmage, which is probably his best attribute. He excels at allowing holes to develop. He uses great field vision to find running lanes and unleashes a very quick, one-cut burst to explode through them. He may not be as fast, or run as hard as Ka'Deem Carey and Bishop Sankey, but he's very good at finding the holes this offense makes for him.

The Coug defense needs to maintain solid gap responsibility, recognizing assignments from unusual formations and play sound football. Bibbs is good enough to sniff out where the weak spots are, like a DE getting blocked and a safety over-committing to the inside. His speed on that bounce is pretty ridiculous. Safety Kaodi Dike (No. 16) for Nevada looks to fill, not quite fast enough, and Bibbs makes one move to get gone.

CSU often sets up their blocking so that Bibbs in one-on-one with a run-stopping safety or outside linebacker. In the last game of his WSU career, we get to see Deone Bucannon do what he does best: annihilate a running back that thinks he's found daylight. Deone can wreck shop, and should meet up with Bibbs quite a few times on Saturday.

WSU should be well-prepared to defend an offense with a great rusher, having faced two of the top running backs in the nation in November and hopefully learning something from it.