The Rams aren't well-known for throwing the ball, but they do it effectively. See how they do what they do, and what WSU will need to do to slow them down.

WSU's defensive success this year was inversely proportional to the opposing QB's talent at the forward pass. Teams with quarterbacks that struggled getting completions down field had a real hard time scoring on the Coug defense. Colorado State quarterback Garrett Grayson will not be one of those.

Grayson -- a Vancouver, Wash., native -- has been more than serviceable for the Rams this season, throwing for a CSU single-season record 3,327 yards.

Let's take a closer look at how the Rams gain that aerial yardage.

When CSU spreads it out, they like to use stacked receiver formations.  Not always, but enough so that it becomes something WSU should be prepared for.  Stacking receivers does a few things for an offense. First, it challenges man and zone coverage by crossing at (or behind) the line of scrimmage; second, it sets up a wide receiver screen to have immediate blockers out front; and, lastly, it creates a bit of a spacing riddle for the defense. 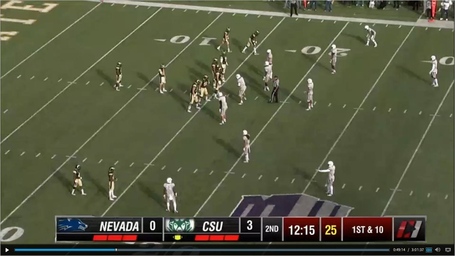 You can see how this formation challenges defensive spacing, in particular with the outside linebacker.  In zone coverage, the backer will be responsible for the inside hook-to-curl zone in Cover 2, and the flat in Cover 3 and Cover 4.  Normally the backer is able to strike a balance between his run and pass responsibilities in zone coverage by splitting the distance between the inside receiver and the end man on the line of scrimmage.

In the 2 x 2 formation above, the OLB is practically forced to line up out of position for one of his responsibilities.  He's chosen to mitigate this by widening his spacing to 5 x 5 (five yards off the ball and five yards out from the end-man on the line of scrimmage), and it's about the best he could hope to do.  If he stays 4 x 4 (standard) off the line, guarding against the run, the slant becomes wide open with only a safety over the top to help (not to mention he has effectively no shot at defending a route to the flat if they're in Cover 3 or 4); if he widens farther than the 5 x 5, there's no longer a second level to defend an off-tackle run.

This stacked formation will really test the athleticism of Tana Pritchard, Cyrus Coen, Eric Oertel, Justin Sagote, and whoever else may be in the mix at Sam or Will.  Watch for what they choose to do with their spacing, and see if Grayson tests that slant route early.

Here's their version of trips: 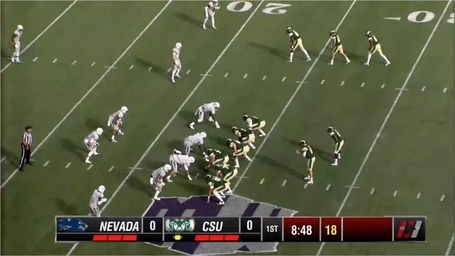 They really like to hit a quick screen to the receiver in the back of this trips formation.  Other times they'll all cross with a slant, flat, and intermediate route breaking out of the confusion at the line.  These were typically 3-step and 5-step routes for the quarterback, meaning they develop pretty quickly.

In addition to the slants, Grayson likes to hit other intermediate routes like seams and digs (square-ins) around 8-12 yards, that occasionally broke for big yardage. The Rams also run your garden variety WR screens and RB swing passes in addition to the out routes and fades common to the pro-style offense.

Grayson has decent arm strength without really threatening to overthrow any of his receivers deep. His mid-range accuracy is pretty good, which has most-likely generated a large amount of his yardage, and he has enough mobility to get himself in position to make a throw, or scamper for a few yards if things get bad.

More from our team sites

More from our team sites

While he certainly can beat a team over the top with either of his three main targets, his strengths side more with slicing defenses at 5-15 yards openings that can break open into bigger plays rather than going deep a lot.  In fact, CSU ranks 31st in the nation for offensive explosiveness.  They can break big plays, and as SB Nation's Bill Connelly pointed out, most of that happens on standard downs, with Hansley -- who the color commentator repeatedly described as a "Wes Welker type" -- being the guy that'll usually do it.

The Cougar defense has surrendered its fair share of explosive plays this season, but the vast majority have been from bombs dropped over the top of the coverage.  That's not really what these Rams do best; their big plays come from a defense misplaying their formation, for either a run or pass, and a not-insignificant amount of poor tackling.

Here, Grayson shows some nice touch to a 15-yard seam route that, through the inspired magic of missed tackles, goes for 20 more yards than it should've.

WSU's biggest coverage weakness is deep, and if CSU tries to attack it, they'll be going away from the strength of the quarterback and their offense a little bit.  Where they'll be most effective is right around that 10 yard range, taking advantage of linebacker spacing and safety depth.

With all the pre-snap movement and strong running game we covered yesterday while scouting the run game, the play-action pass becomes a legitimate threat, especially when we consider how reliant this WSU defense is on Deone Bucannon to stop the run. If he's the slightest bit over-eager to mix it up with Kapri Bibbs, the secondary could be exposed downfield.

CSU showed a few different bootlegs and naked roll-outs off play action fakes that always seemed to work.  In every case there are routes at all three levels: a leak into the flat, a drag across mid-range, a fade/corner to the playside, and a backside post.

This is a very traditional play-action pass, complicated only by formation:

Perhaps the best, or rather most often successful, wrinkle in play action is the throwback.  The running back fakes the hand-off, hides at the line of scrimmage for a bit, then streaks down field. This works if the linebacker loses his B.O.Y.S. or "Back Out Your Side" responsibility:

One more thing to keep an eye on, even if it's not strictly pass game related.

With this being a bowl game, trick plays are somewhat inevitable. There's no reason left to hide anything, and offensive coordinators and head coaches get a chance to show off some of their gimmicks. Baldwin's playbook is rumored to be pretty large, and he usually throws in some twists every game.  Expect a bit of this kind of trickeration on Saturday.

Colorado State's passing game presents a unique challenge for the Cougs with its formations. CSU's offensive line protects the quarterback reasonably well and Grayson is good at finding the open guy. With an average 33 pass attempts per game, the secondary will have the opportunity to prove how well it can cover.