The Rams haven't faced a team that throws the ball like WSU does all season, so figuring out what CSU will try to do against the Cougs is a bit of a guessing game.

After thoroughly scouting the Colorado State offense -- in both the run and the pass game -- it's a little more difficult to get a bead on what the Rams will try to do defensively against the WSU offense.

Unfortunately, the only CSU game we were able to watch in its entirety was against Nevada, which had two major drawbacks: the Campus Insider production crew was really interested in zooming in on Nevada quarterback Cody Fajardo and his knee brace for most of the Wolfpack's offensive possessions, and the Pistol doesn't really give a good look at how the CSU defense would line up against WSU's spread anyway.

Still, there are a couple of things we can learn.

The Rams spent the majority of this game in a defense that plays like 4-3 Cover 2, and would often roll to Cover 3.  CSU was said to have implemented a 3-4 scheme in 2012, which could bode well for the Wazzu offense as the Cougar defense runs a 3-4.  WSU's offense -- from the linemen, to the receivers, running backs, and Halliday at quarterback -- should be well acquainted with all the defensive looks the Rams can give them. 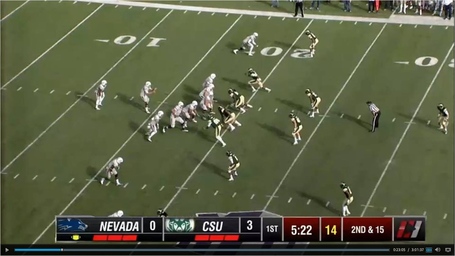 Often, the ends (one DE, one LB in a 3-4) will both be standing, and the Rams usually pressured with all four lineman, occasionally bringing A-gap pressure from one of their backers. The majority of pressure comes from their Buck as an edge-rusher. Middle linebacker Max Morgan (No. 40) anchors the defense, with 129 tackles (66 solo), and linebacker (Buck) Shaquil Barrett (No. 56) leads the team in sacks with 12.

Connor Halliday and the Wazzu receivers should expect to see a lot of zone from the CSU secondary, as they don't quite have the talent to man-up the Coug receivers. The Ram secondary is not blessed with great statistics; they're 104th in opponent TD:INT ratio (3.0), 102nd in passing first downs allowed (11.38), 103rd in passing TDs allowed (2.08), 111th in passing yardage allowed (265.38), and 104th in opponent yards per completion (7.95).

If they try to press in man without two safeties over-top, expect Halliday to attack it vertically immediately. It'd be a mistake to let them bump-and-run Gabe Marks, Dom Williams, Isaiah Myers or Vince Mayle (yes, all four are highly capable deep threats) without taking a shot.  They may also try and swap a nickel corner in for the defensive end and play with five defensive backs, allowing for the safety help, but we don't have a solid grasp of what their personnel would be, or how they'd feel confident defending four wide receivers.

For what it's worth, safety Trent Matthews (No. 16) leads the team in interceptions with four.

This game is a great opportunity for the wide receivers to show how well they can't be covered. Colorado State's defense has an F/+ rank of 60th. WSU has only played two teams with a worse defense; Idaho (102) and Cal (100).  Oregon State's defense (59th) is the closest statistically to the Rams. All the other regular season opponents were ranked 26th or better. All the numbers on paper are in their favor; now they need to go out and show they can abuse a secondary that they're supposed to.

Everything about this match-up says if Halliday and the receivers are on, a nation watching the first bowl game of the season could witness the video game stats of Leach's Air Raid played-out by WSU.

See you all in New Mexico.