WSU Baseball: Can the Cougars return to the postseason?

It once seemed like Donnie Marbut was building a perennial contender at WSU. After missing the NCAAs in back-to-back seasons, the Cougars are aiming to get back on track.

Share All sharing options for: WSU Baseball: Can the Cougars return to the postseason?

While spring training has only recently gotten underway in professional baseball, colleges don't even wait for the snow to completely go away to start playing games that count: Across the country, teams threw their first pitches on Friday, and WSU was no exception.

The opening weekend of the season didn't go according to plan for the Cougs, who traveled all the way across the country to Cullowhee, NC, just to come home with series loss to Western Carolina. Lest you think the Catamounts are some sort of midmajor power you've never heard of, they were rated 90th last season by RPI and 93rd by Boyd's World's ISR (the closest thing I've found to a kenpom.com-like rating system for college baseball). Incidentally, that's lower than WSU finished last season.

Western Carolina did bring back almost its entire team this year, but let's just say that coming home with one win in three games against that competition, no matter that it was on the road, isn't exactly a great way to start a campaign when you've got eyes on the postseason. Still, there's a lot of reason for optimism when it comes to the Cougs. Here's a quick preview of the 2013 season.

(Oh, and if you're wondering if it's worth it to pay attention to the team, it probably is if you've got Pac-12 Networks: Even though only a handful of their games will be broadcast, most of WSU's games are slated to be streamed on Pac-12.com. If you have DirecTV ... it's probably time to switch to Dish, don't you think?)

Perhaps no team in the entire conference lost two players more important to its team's success than WSU. Jones and Ard were a formidable 1-2 punch for the Cougs last season, arguably the best middle-of-the-order combination in the Pac-12. When they departed, they took 21 of the team's 30 homers and 54 percent of the team's overall extra base hits with them. (Ard spent his time after last season tearing up the Northwest League with the Seattle Mariners' short-season A affiliate in Everett; Jones wasn't quite as successful with the Colorado Rockies' affiliate in Tri-Cities.)

The losses of Johnson, Claussen and Richardson, are less severe. Johnson was an excellent defensive outfielder and also was the team's most accomplished base stealer, while Claussen and Richards were solid defenders who provided a bit of gap power. All were steady performers, but none are irreplaceable.

Jones and Ard, however, likely are irreplaceable. If the team is going to exceed its offensive output of a year ago, it's more likely to come from a lot of guys taking moderate steps forward rather than a couple of guys becoming middle-of-the-order mashers.

Jason Monda, junior, OF/1B/RP (2012: 193 ABs, .275/.365/.363)
The sweet-swinging lefty's talent has never been in question, but up until now, he hasn't quite fully delivered on that promise. A legacy whose dad ended up playing in the Cincinnati Reds' system for six years, he's put together a couple of OK seasons in his first two years, but he's yet to make his mark driving the ball as his lanky frame has taken time to fill out. He hit just three homers in his first two years, but is off to a stellar start this year, lighting up the Catamounts for six hits and a homer. This is the one guy who might be able to take a big leap forward and replace a good chunk of Jones' production. He also covers a ton of ground in the outfield, and even pitched an inning of scoreless relief in Sunday's win, striking out the side in order in his collegiate pitching debut. The kid is talented.

Yale Rosen, sophomore, DH/OF (23 ABs, .087/.267/.130)
A rock at 6-2/208, Rosen's got power to spare: He hit .339 with 12 homers in 30 games for his summer team. It wasn't against the top competition of the storied Cape Cod League that Monda was in, but it was an impressive display nonetheless -- it set the team record for homers in a season ... in just about half of the season. His summer ended early with a shoulder injury that required surgery, but it appears he's fully healed: Rosen wasted no time hitting his first home run on Friday. Marbut said this about Rosen to Cougfan.com: "Derek Jones is the all-time leading home run hitter at Washington State. (Rosen’s) got all the power Derek had."

Nick Tanielu, RS freshman, 3B/IF
With Claussen and Richards as stalwarts at third and second, Tanielu had to wait his turn last season. He's been thrust into the spotlight this year: Tanielu -- not Rosen -- bats cleanup. He's off to a hot start, hitting .429 with a pair of doubles.

P.J. Jones, sophomore, C (99 ABs, .303/.363/.414)
Collin Slaybaugh entered last season as the catcher, but as the season went on, Jones took the job and refused to let go. Marbut loves athletic catchers, and Jones fits the mold. He's not real big at 5-9/186, but he's got a little bit of gap power in his bat. He's also already accomplished every kid's dream: He hit a walk-off grand slam against Oregon State last season in a game that was broadcast by FSN.

Adam Nelubowich, RS junior, OF (181 ABs, .254/.310/.384)
The Canadian lefty is one of the reasons why this lineup might end up being better overall. He's got a little better pop than his stature (6-2/195) might indicate, and he'll be batting in the bottom third of the order. He posted the best OPS of the opening weekend for the Cougs batting sixth and seventh. Not bad at all.

Ben Roberts, RS freshman, OF
Roberts was drafted in the seventh round by the Arizona Diamondbacks out of high school, normally the range where a kid will often forgo college. Roberts chose to come to WSU and spent last season redshirting. Considered a top 100 prospect by some after his senior year, Roberts could be poised to surprise the Pac-12. He didn't have a great opening weekend, going 0-for-5 in the leadoff spot in his first game, but rebounded to go 3-for-8 with a homer in the final two games. 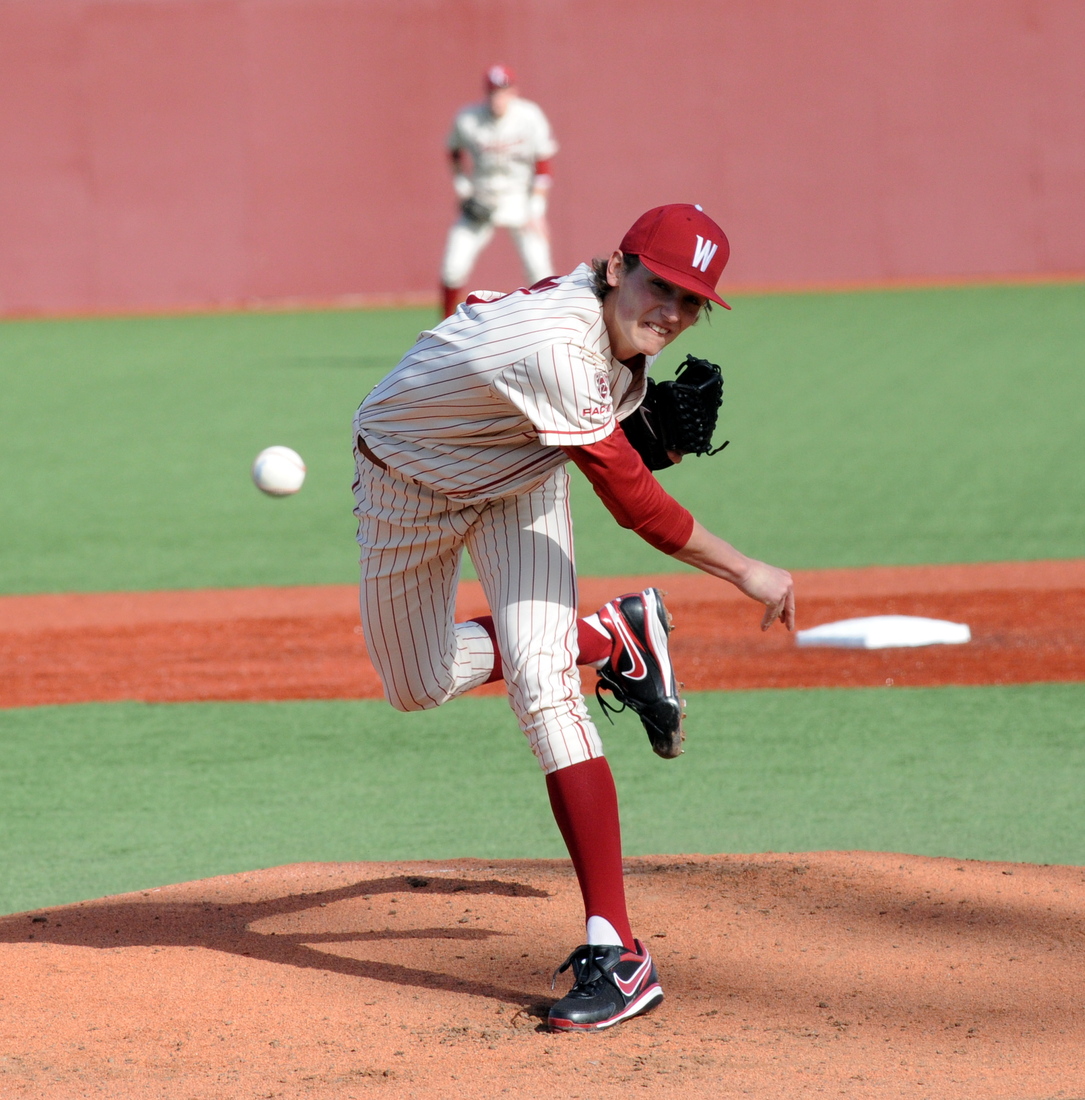 Tanner Chleborad, sophomore, RHP (74.1 innings, 5.1 strikeouts/9 innings, 3.9 walks/9 innings, 4.84 runs/9 innings)
Thrown into the fire as a true freshman, the lanky righty has ascended to Friday night starter status, meaning he's the de facto ace of the staff. The Seattle Mariners thought enough of the relatively unknown prospect out of South Dakota to try and sneak him away from the Cougs with a 24th round pick out of high school, but he came to WSU instead. He's got a naturally live arm, and it was believed he'd add velocity as he filled out. It's unknown if he's added any mph to the fastball, but he didn't get off to the greatest start, giving up seven runs in 5 2/3 innings in his season debut. He had some bad luck with the long ball last year, giving up a team-high five, and it carried into this year as he gave up a homer on Friday. Still, it's believed he's got ace-type stuff.

Joe Pistorese, sophomore, LHP (66.1 IP, 5.3 SO/9, 3.9 BB/9, 3.26 R/9)
The lefty was the Cougs' best pitcher last season. That's probably not a great as it sounds, since the staff as a whole struggled mightily last year, but still - for a true freshman who started the season in the bullpen, that's a pretty awesome accomplishment. In his final three starts, he gave up just one run on 10 hits over 18 1/3 innings. He's the Saturday starter, and he didn't fare real well this past weekend, giving up seven runs in just 3 1/3 innings. However, the conditions were wacky (30 degrees with wind gusts and snow flurries), leading to a mess of errors behind him. Consequently, none of the runs were earned. He was a 44th round pick by the Chicago White Sox out of high school.

J.D. Leckenby, junior, RHP (80 IP, 4.7 SO/9, 2.4 BB/9, 5.40 R/9)
After being incredibly successful in spot relief duty as a true freshman, Leckenby was thrust into the Friday night starter role last year. It didn't go very well. The sinker that allowed him to dominate in his first season was inconsistent in his second, elevated and punished all too often, so Leckenby moves back to the bullpen this year as the closer. It's a little bit of an odd choice for a guy who doesn't miss a ton of bats, but Marbut likes Leckenby's makeup for the role and Leckenby, for his part, seems to be embracing the change.

Will this team be able to do enough to get back to the postseason? It's tough to say. The last two years, it's been one part of the game that has overshadowed the other good things the team was doing and conspired to keep the record down. Two seasons ago, it was a porous defense. Last season, it was a struggling pitching staff.

The pitching staff should be improved this year, but will the offense be deep enough to overcome the losses of Jones and Ard? The potential is there, but it would be a bummer if the team missed out on the NCAAs again because it couldn't get all three phases of the game to play well at the same time. That's to say nothing of a defense that has a serious question marks at shortstop with Trace Tam Sing and/or Ian Sagdal, both of whom have been error prone.

The good news is that the team plays its next eight games at home, starting with a 2 p.m. first pitch on Friday against Eastern Michigan (a team ranked right around 200 last year), and Bailey-Brayton Field has been incredibly kind to the Cougs. If they can emerge from that with six or more wins, they'll be right back on track for where they want to be.