The Monday After: WSU baseball drops three of four in opening road trip

The Cougs nearly pulled off a series victory against No. 1 Cal State Fullerton before falling to UC Riverside.

Share All sharing options for: The Monday After: WSU baseball drops three of four in opening road trip

What nearly was an amazing start to the WSU baseball season turned sour on Monday when the Cougars dropped a 12-7 decision to UC Riverside that left them with just one win in their opening road trip of the season.

This, after being tied with No. 1 Cal State Fullerton on Sunday in the rubber match of a three-game series.

But, as has so often been the case in the last couple of years, WSU just couldn't figure out a way to push through for a potentially season-changing result, losing to the Titans in the bottom of the ninth. That one is going to sting, and the ripple effect could possibly be felt come tournament time in May.

If the first series of the season seems too soon for such grand proclamations, consider what a series victory on the road against a team that seems likely to host a regional and super regional could have done for a program that is desperately trying to return to the postseason for the first time since 2010. The perception of the Cougs changes immediately.

Beyond that, RPI still plays an enormous role in the rating and selection of teams, and two road wins against Fullerton would have made a significant difference.

Perhaps the committee takes the near miss into account. But with all the games played by all the teams who will be under consideration, it's hard to imagine that the committee will look all that close at what could have been for WSU.

And while Monday games of a four-game series can test a team's depth and sometimes lead to wacky results, it's not a great look to get bombed by a Riverside team that was rated around 160 in the RPI a year ago.

Despite the missed opportunity, we love the fact that the Cougs went toe-to-toe with a great team on the road. The series started terribly with WSU getting shutout 12-0 in the opener on Friday, but momentum is the next day's starting pitcher, and Tanner Chleborad gave the Cougs five strong innings as WSU got out to a 7-3 lead heading into the bottom of the sixth.

WSU would go on to win the game, setting up the possibility of a series win on Sunday. Tied at three, Matt Bower gave up a run in the bottom of the eighth, but WSU wouldn't go away quietly. Ian Sagdal drew a pinch hit walk to lead off the ninth, and after a sac bunt and fielder's choice, the Cougs were able to push the tying run across when Collin Slaybaugh delivered with a two-out single on the 10th pitch of the at bat.

Aside from the drubbing on Friday, the Cougars proved themselves to be in the Titans' class. And that's exciting.

There are a lot of things one could choose from early in the season when a team comes home 1-3, but I'm going to write about this particular topic just one time in order to get it on the record, then try my darndest never to bring it up again because I highly doubt it will ever change and I don't want it to become some running thing where it seems like I'm unhappy with Donnie Marbut, who has done (and continues to do) an amazing job with this program.

I have no empirical evidence to back this up, but based on the games that I watch, college baseball coaches seem to call bunts and "put the game in motion" far more frequently than their major league counterparts. Marbut is no exception. 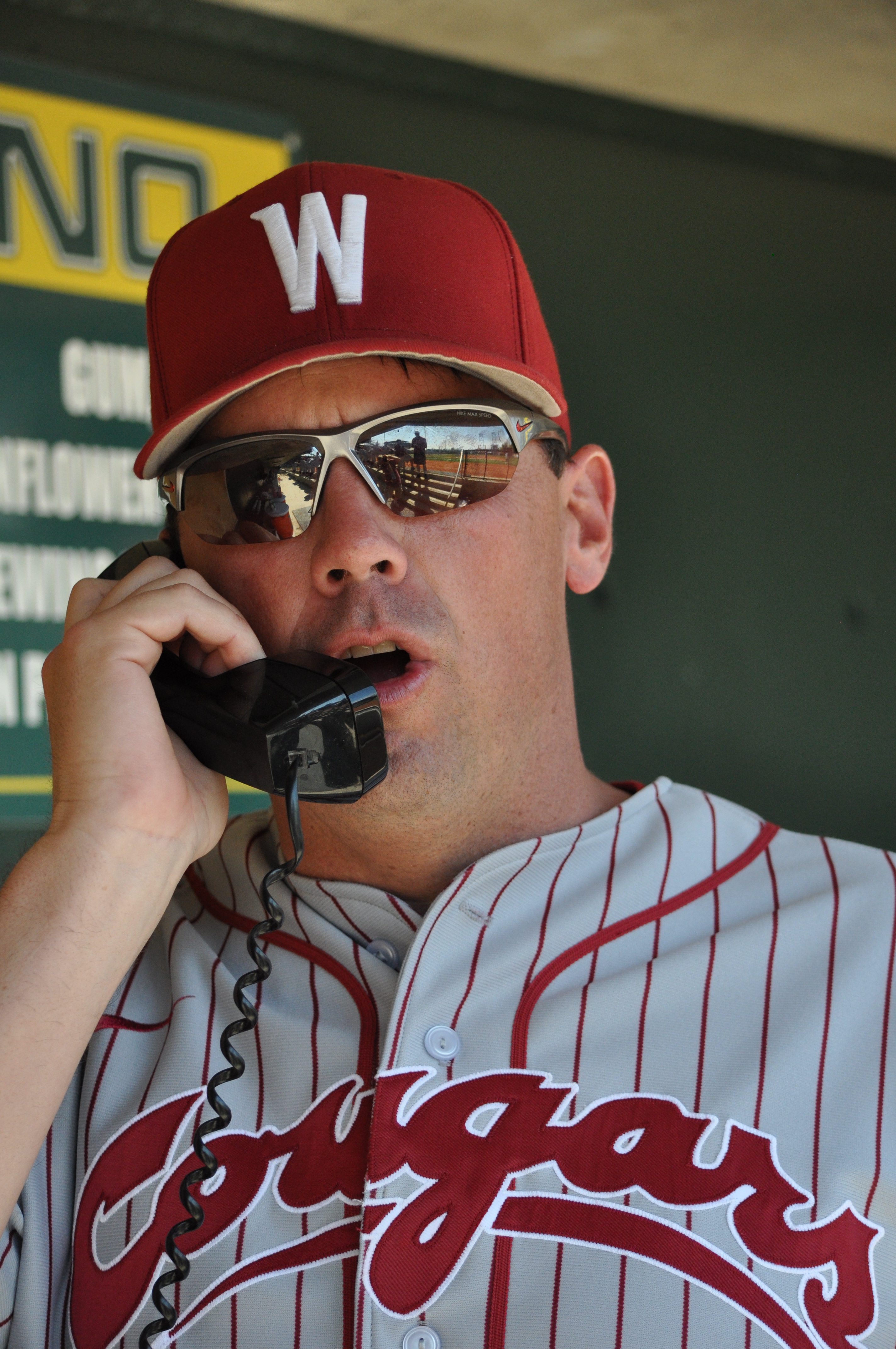 This demonstrated fundamental misunderstanding of the value of outs on the part of college coaches will never cease to irritate me.

Outs are a finite resource. You only get 27 of them, and for every out you exhaust, you reduce your chances of scoring runs. Thus, if you're going to give them away via bunts or put them at risk via steal attempts ... well, there better be an awfully good reason for it.

The general rule of thumb is that bunting is a good play if you're trying to get one run. That's basically it. And the times when one run is all you actually want are very limited. If it's a tie game in the bottom of the ninth and the leadoff man gets on base, playing for one run makes a lot of logical sense.

But what about when you're down by a run in the top of the ninth on the road, as WSU was in the final game against Fullerton? Marbut bunted the leadoff man over, watched him move to third on a fielder's choice, then watched the tying run come across after a clutch two-out hit.

Vindication? Many would say yes. I say no. And here's why.

The moment Marbut called for that bunt, he severely reduced the chances WSU would score more than one run. If you knew nothing else about this particular game and I said to you, "Tie game, bottom of the ninth, No. 1 Cal State Fullerton is coming up to bat against WSU -- who do you think has the higher probability of eventually winning the game, WSU or Fullerton?", the answer is obvious, right?

So then why would you play for one run to put yourself in a position where you're still unlikely to win?

This is the baseball equivalent of the football coach who kicks a field goal late in a game down by 10 instead of going for a touchdown so that it at least feels like his team still has a chance to win, even though they're probably still going to lose.

Is this nitpicky? Probably. I went to WSU during the Steve Farrington era, so I probably should just shut up and be thankful that Marbut has stuck around and built what he has with subpar facilities. And I am thankful.

I'd just be a little more thankful with fewer outs given away.

OK, rant over. Now you all know where I stand on this silly topic, and you can imagine the vein on my forehead sticking out with each third inning bunt by WSU this season.

Pitcher: True freshman Ian Hamilton threw three shutout innings in relief in game two, giving up just two hits to 11 batters which put WSU in position to win the game in the 11th.

Hitter: Jason Monda didn't hit like the sixth round pick that he was in last summer's major league baseball amateur draft. He's off to a slow start with just one hit in his first 12 at bats. He also gave up a couple of runs in three innings in the start on Monday. Not terrible, but not great, either.

Pitcher: True freshman Jacob Shroeder had a rough debut, giving up two runs in two thirds of an inning in relief of Chleborad on Saturday, then got pounded for four more runs in an inning Monday in relief of Monda as the game at Riverside got out of hand. In all, he gave up six runs in less than two innings. Ouchie.

Western Carolina visits Pullman for a four-game series starting on Friday at 6 p.m. at Bailey-Brayton Field. It was in Cullowhee, N.C. that last season got off to a poor start; now the Cougs get to try and return the favor against the Catamounts, who picked up a win in three games at No. 2 Mississippi State to open the year.

This is a solid team from the Southern Conference (No. 54 in the 2013 RPI) that the Cougs really need to beat three out of four in order to bolster their resume. A warm-weather team traveling all the way across the country should be prime pickings for WSU.

Aaron Attaway is the guy WSU will be wary of; the shortstop is the preseason SoCon player of the year, and he went 6-for-13 with a pair of doubles in the opening series in Starkville. Friday night starter Jeremy Null held the Bulldogs scoreless over eight innings, allowing just three hits with 12 strikeouts and one walk. The Cougs will have their work cut out for them in the first game.