This Week In Baseball: WSU takes series from Arizona, San Diego up next

The Cougs opened Pac-12 play in excellent fashion, picking up their first series win in Tucson since 2006.

Share All sharing options for: This Week In Baseball: WSU takes series from Arizona, San Diego up next

Two weeks ago, the WSU baseball season looked as if it could be heading to an irredeemable place sooner rather than later. Now, after picking up their second series win in as many weekends, things are looking up for the Cougars.

WSU took two out of three games against Arizona, the Cougars' first series win against the Wildcats since 2009, and the first in Tucson since 2006. That is undoubtedly a positive sign. That said, the series also was a reminder of the fickle nature of baseball and just how thin the line between failure and success can be.

Must Reads from CougCenter

Ken Bone out as basketball coach

The 2013-2014 season has been the worst of Ken Bone's five at WSU. It apparently was the final straw for athletics director Bill Moos, who relieved the coach of his duties.

The Cougar women's basketball team is playing in its first postseason tournament in 23 years.

Must Reads from CougCenter

After starting the series on the wrong end of a 12-1 beating, the Cougs were staring at a series loss in the top of the ninth of game two, trailing 5-4 with two outs and nobody on. It's precisely the sort of situation in which the WSU has faded meekly into the sunset, and when the Cougars' best hitter, Nick Tanielu, dribbled a routine grounder to second base, it looked as if that was going to be the story again.

Only Trent Gilbert kicked it away, and the Cougs had new life. Cleanup man Yale Rosen smacked a double in the right-center gap, bringing up PJ Jones with a chance to tie or get the Cougars ahead.

But first, a word about Jones. Before Saturday's game, Jones -- the starting catcher -- was 0-for-32 to start the season. He had essentially gotten Friday night off, making just a pinch hit appearance. Now, I realize this story would be a bit more dramatic if he had entered the ninth hitless, but he actually had finally broken through earlier in the game with a pair of hits.

He got his third hit of the season when he legged out an infield single, bringing across not only the tying run, but also the go-ahead run: Cameron Frost, pinch running for Rosen, alertly hustled the entire way, scoring from second when he beat out the throw home from first. It was a sequence nobody outside the stadium saw, because Arizona's camera man had no idea it was happening. But Jones' reaction was caught on camera, and that said it all.

Freshman Ian Hamilton, who had come in with one out in the eighth inning, finished it off.

Our guys played hard for two-straight days. We played really well today. This is not an easy park to pitch in and our guys did a tremendous job against a very good lineup. -WSU coach Donnie Marbut

If you read this series each week, you already know we're not huge fans of bunting. Not because it's evil, but because it's often deployed by coaches in suboptimal situations. Lopez took that to an extreme on Sunday. Down 3-1 in the eighth, Arizona's leadoff man reached base. Needing two runs, Lopez elected to trade an out for moving one runner into scoring position. Reminder: Arizona trailed by two. The runner did eventually score, but the Wildcats still trailed by one.

Oh, and by the way: The bunter was Scott Kingery, who is hitting .443 with an OBP of .544. Lopez decided he'd rather go for the bunt, which probably results in an out nine(ish) out of 10 times, rather than let a guy who reaches base roughly every other time he comes to the plate swing away.

In the ninth, the leadoff man again reached base -- this time when Tanielu couldn't make the tough play on a chopper -- and Lopez again called for the sac bunt. It's not as egregious as the first bunt, but still, you're playing for the tie, and when coupled with the first bunt, you've now given away two of your final six outs when you need at least two runs.

Think of it this way: If you're the coach of WSU, which of these two scenarios would you prefer if you were given a choice?

Obviously, context would come into the situation to some degree (which batters are you facing, etc., etc.), but in general? I'd take reducing the number of outs by a third -- with my best relievers on the mound --- nearly every time. And yet Arizona's coach chose the opposite. On purpose.

In fact, Marbut actually gets a lot of credit for helping the Cougs win the series. WSU doesn't get that second run on Jones' hit without replacing Rosen with Frost, and the Cougs' third run on Sunday came after WSU got the first two men on in the eighth and Marbut called for a bunt. It led to Arizona loading the bases with an intentional walk of Tanielu, and Rosen delivered with a soft line drive that was a bit unlucky to not score two runs. I still don't think I would have called for a bunt there, given that it predictably took the bat out of your best hitter's hands to set up a lefty-lefty matchup with Rosen, but that's a move that's a matter of preference. I think both are perfectly defensible.

In all, a great weekend for WSU. It wasn't perfect, but I think we now know that this team is highly imperfect. And when a highly imperfect team is a cleanly fielded routine groundball away from losing the series but somehow figures out a way to win?

Against an offense that was one of the best in the Pac-12, the starters again came through with flying colors. Jason Monda, Joe Pistorese and Chleborad combined for 18 2/3 innings and seven earned runs allowed (3.38 ERA). That's outstanding.

Second, it's a great sign that this team is continuing to fight. Not every team that fights gets good results -- obviously talent matters -- but when a team has a modicum of talent and fights, good things can happen. Good things happened this weekend.

As nice as it feels to win, this team still is walking a tight rope. If you know anything about pythagorean expectations in sports, you know that overall run differential is a pretty good predictor of wins and losses. WSU still has been outscored by 43 runs in 15 games, and that's obviously bad.

Basically, virtually every game this season has fallen into two categories: Blowout loss or close game. We know that over the long run, teams tend to win 50 percent of their close games, and that's been the case with WSU this year -- 6-5 in games decided by two runs or fewer after the two wins this weekend. Coaches and casual fans love to point to close wins as evidence of a team's heart or whatever -- heck, I referenced the ever ambiguous "fight" just above this -- but the truth is that playing a lot of close games is a great way to have a mediocre record.

Additionally, WSU pitching stranded 25 runners this weekend, including 20 in the two victories. That sort of thing also tends not to be sustainable unless you've got a pitching staff that strikes out tons of guys. WSU does not.

So while I'm happy about the series win, I'm still a bit concerned about where this team is heading. The Cougs still didn't score a ton of runs, and this series didn't have a "bust out" feel to it. Maybe that breakout is coming. Maybe they just needed to get a little confidence. We'll see. 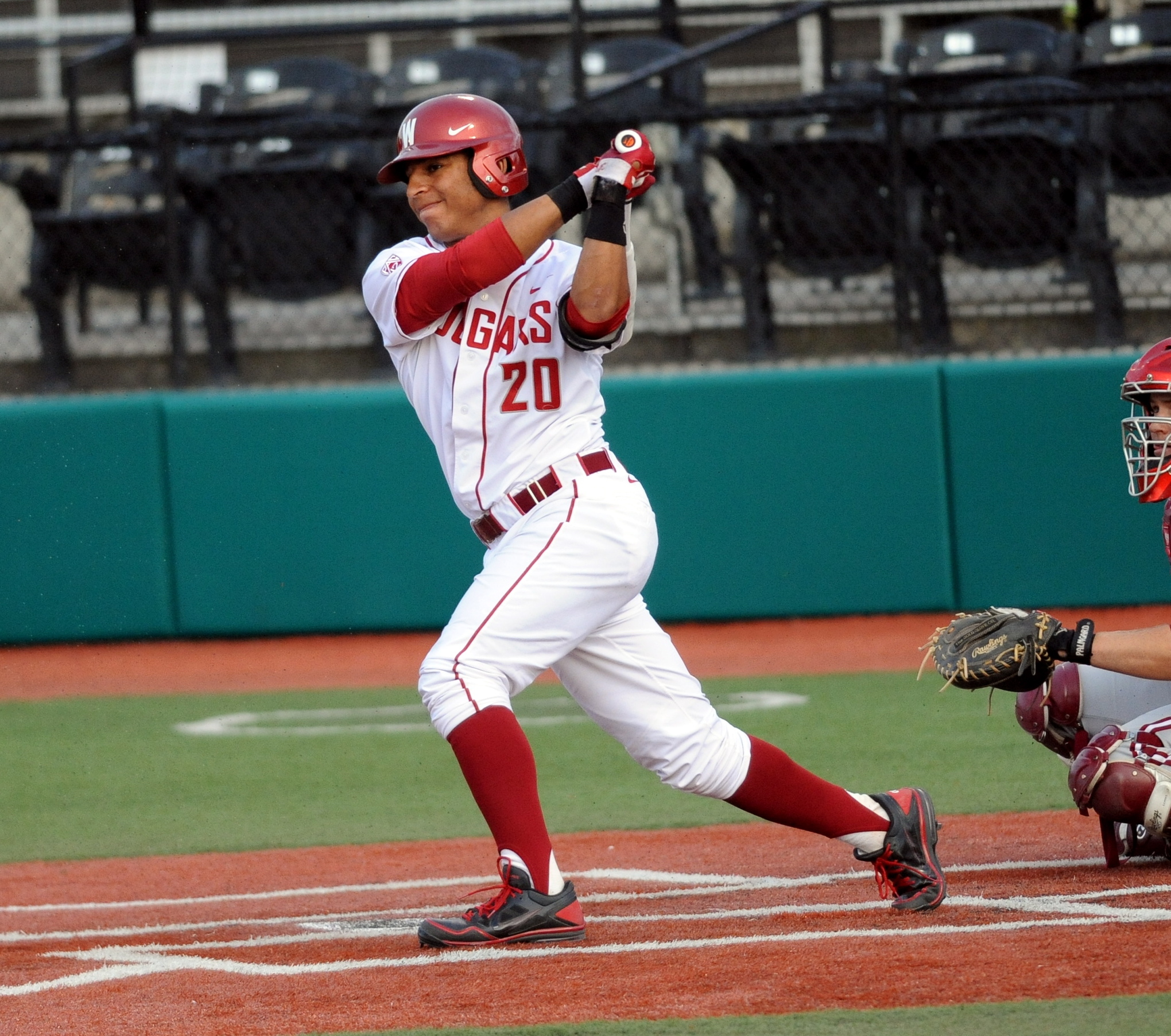 P.J. Jones gets the award here! How can you not give it to the guy who saved the weekend while simultaneously breaking out of an epic slump? Fortunately, I have no idea how it feels to be a starting player on a struggling Division I baseball squad and putting up about 10 consecutive 0-fers, but I'm guessing it pretty much totally sucks.

Good on Jones for busting out of it. His five hits over the weekend raised his batting average 122 points!

Of particular note: Shortstop Trace Tam Sing has a fielding percentage of .864 -- unacceptably low for anyone, let alone the guy who's supposed to be the defensive stalwart of the infield.

Defense has been an ongoing issue for years now. I don't know how reasonable it is to expect it to change at this point.

The Cougs have moved on to San Diego, where they will take on the Toreros tonight and Wednesday at 6 p.m. If you think going to visit a WCC team midweek is a break, it's not: USD is ranked in the top 25, and at least one advanced metric thinks San Diego is on the fringes of the top 10.

Now, one could make the case that WSU's pitching staff did a pretty decent job against a potent Arizona offense. That would be true. Too bad none of those three starters will be going for the Cougs over the next two days.Tonight's starter has been announced - it's Jake Schroeder, who doesn't yet have a start and has allowed six runs in 1 2/3 innings. Yikes.

As for Wednesday, Scott Simon would be a good guess. Another option could be Kellen Camus (typically a reliever) who didn't pitch this past weekend. That could mean he's injured, but it could also mean he was being held back to start. Simon and Camus are the only other pitchers to have started this season besides the regular weekend rotation.

The flip side, of course, is that WSU will miss USD's regular starters, too, which is great news. It appears that Lucas Long and Ryan Olson are the two spot starters for San Diego. Long has been excellent, mostly in relief, while Olson has been less impressive.

Splitting these two games would be good; somehow securing a sweep would be spectacular; getting swept would erase the good feelings from this weekend.

You can watch the games online here.