This Week In Baseball: WSU drops another series, this one to Cal State Northridge

Share All sharing options for: This Week In Baseball: WSU drops another series, this one to Cal State Northridge

The WSU baseball team, which entered the year receiving votes in the top 25 poll, is now 2-7 after dropping its third consecutive series to start the season. That would be disappointing for any team, but it's even more so for a team that has designs on returning to the postseason for the first time since 2010.

For context on the hole WSU has dug itself, consider: A 2-7 record is a .285 winning percentage; if this was a college basketball season, in which the teams play 30 games, the Cougars would be on pace for something like a 9-21 record. The basketball team is 9-19.

That's how far WSU baseball is off the postseason pace at the moment -- they're currently performing like the basketball team.

We threw the pitching under the bus last week, but the boys on the mound turned their fortunes around at Cal State Northridge. That is absolutely great news for the Cougs.

The bad news? Even with those starts, WSU could win just one game because the offense went completely in the toilet, scoring just three runs in three games against the Matadors.

With 44 games still to go, there's time to get this right. But it has to start this weekend, and it's not going to be easy: Texas State - coming to Pullman this weekend - is a reasonably decent team, and then the Cougs head to Arizona, to San Diego and to UCLA in consecutive weekends.

And guess what? San Diego is likely the best of all of them. Ugh. 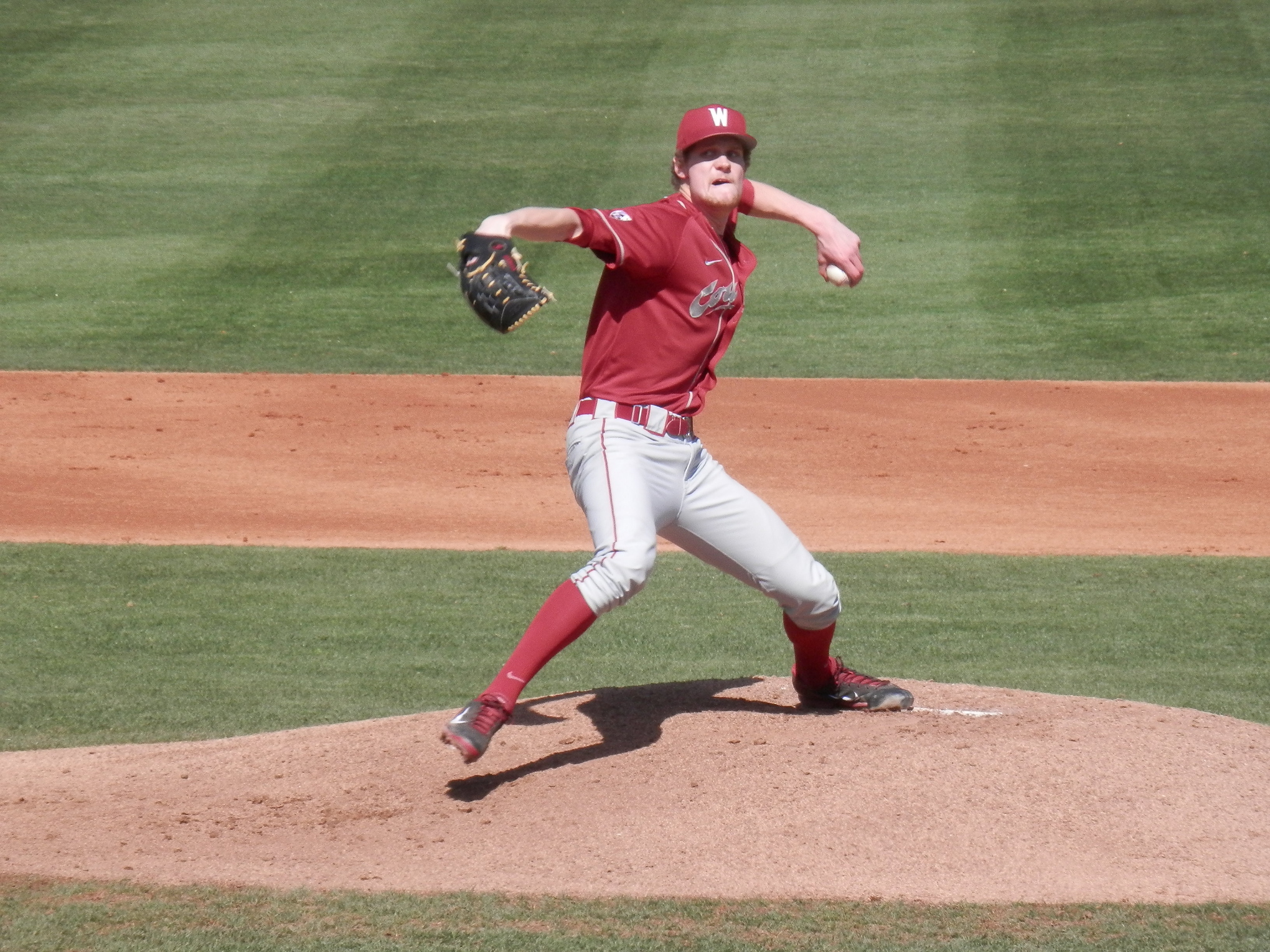 Of course, the cynic would point out that Northridge is hitting .251/.331/.296 this season. We'll just go ahead and let you decide how much of this weekend was WSU's pitchers and how much was Northridge's batters.

Just how bad was the offense? The Cougs posted a .181 batting average, .295 on-base percentage and .181 slugging percentage.

Yes, that's correct - they did not record one extra-base hit all weekend.

The question obviously is this: How do the Cougs get it turned around? Baseball is unique, because Donnie Marbut isn't installing a new motion offense to jumpstart things. There are no trick plays to draw up. It's just a matter of the hitters doing what they are supposed to be able to do.

And make no mistake, they are supposed to be a lot better than 11th in the Pac-12 in average, 10th in on-base percentage and 11th in slugging.

Leadoff hitter Trek Stemp is sporting a .300 OBP. Cleanup hitter Yale Rosen has just two extra base hits - zero of them homers - and a .321 slugging percentage. Ben Roberts, a seventh round pick out of high school, is hitting .250/.318/.250 as a redshirt sophomore after a disastrous freshman season.

There's plenty of blame to go around. All of those guys need to pick it up.

For all his offensive struggles, Monda has been good on the hill. He pitched 6 2/3 scoreless innings on Friday in a game WSU would eventually lose in extra innings. He has allowed just two runs over his 9 2/3 innings across two starts -- and neither of those runs was "earned" if you put stock in that statistic -- and he's running a 6.5 K/9 rate. That's not spectacular, but it's certainly serviceable.

Sorry, Ian Hamilton. I know you saved the lone win for the team in game two, but giving up the winning run in the 10th (after nearly doing so in the ninth) in game one was a real downer for a team that is obviously badly in need of wins.

Texas State (9-2) invades Bailey-Brayton Field for a three-game series starting on Friday (6 p.m./2 p.m./noon). In case you needed to be more depressed, the Bobcats swept the same UC Riverside team that beat the Cougs 12-7 in a one-off Monday game following the Fullerton series.

But, if you're looking for optimism, this will be the Bobcats' first games outside of Texas, and Friday's game will be only the second at a park other than their own.

Catcher Tyler Pearson has been Texas State's best hitter, batting .364/.488/.667 with extra base hits (three homers and a double) making up a third of his hits. (He also has a sacrifice bunt. Stew on that one for a while!) The rest of the Texas State offense has been sketchy, however, as the Bobcats have hit just .249 as a team despite some relatively weak competition.

The big challenge for the Cougs is going to be putting the bat on the ball. WSU has struck out 59 times in 9 games, about 6.5 Ks per nine innings. Texas State has thrown 100 Ks in 102 2/3 innings against just 34 walks. Not a good combination for WSU, which is last in the Pac-12 in walks.

Somehow, some way, WSU really needs to come up with a sweep here.