WSU baseball drops tight series with UW, USC up next

As their coach was forced to stay away from the field, the Cougars just couldn't score runs while dropping a doubleheader on Sunday against the Huskies to lose the series.

Share All sharing options for: WSU baseball drops tight series with UW, USC up next

Another weekend, another disappointing result for the WSU baseball team. Despite only being outscored 8-7 in the three-game set, the Cougars dropped their series with top-10 Washington at newly renovated Husky Ballpark, two games to one.

The series started well enough, with WSU earning a come-from-behind 6-4 victory against the Huskies on Friday. Starter Joe Pistorese gave up four runs in the second inning, the final three coming on a home run by Austin Rei to dead center that looked like a pop up that got caught in some Lake Washington jet stream and carried over the fence.

The Cougars battled back, however, scoring three in the top of the third to close to within one. Ben Roberts had the big hit -- a triple -- to score the final two runs with two outs. Pistorese got into the sixth inning before giving way to the bullpen, which was stellar. Kellen Camus, Matt Bower and Sean Hartnett tossed 2 1/3 innings of one-hit ball, which gave the Cougs the opportunity to take the lead for good, which they did in the seventh by scoring three runs.

After tying the game on a fielder's choice, the big blow was Ian Sagdal's two-out, two-run single on about the 10th pitch of the at bat. Ian Hamilton finished off the game with a four-out save.

Saturday's game was postponed until Sunday because of weather, and the clutch hits from Friday didn't make it to the doubleheader. Despite getting a gem from game one starter Tanner Chleborad and some more outstanding relief pitching from Camus and Hamilton in game two, UW swept WSU 2-1 and 2-0.

The Cougars scattered 13 hits over the two games with just a pair of doubles mixed in. UW also only had 13 hits with three extra base hits, but the Huskies had the good fortune of better timing -- a double by Brian Wolfe scored the decisive run in the first game, while a double by Rei scored the two runs in the second game.

Nowhere was the lack of luck better exemplified than in the final three innings of the first game. Down by a run, WSU rolled the dice by giving away outs with sacrifice bunts in the seventh and eighth innings after getting the leadoff man aboard, only to go 0-for-4 with the remaining four outs. In the ninth, the Cougars had one chance with the tying run on second and one chance with the tying run on third and go-ahead run on second, but a pair of strikeouts ended the game. All told, the Cougars had six chances to tie or go ahead and failed to get even one hit.

As noted last week, WSU played the series without coach Donnie Marbut, who now has one game left on a six-game suspension imposed by the Pac-12 after his ejection against Oregon. Marbut said in his weekly teleconference that it was tough to watch the team struggle while having to be away from the field.

"Sunday was probably the most gut-wrenching (day) of my life. I'd never felt so out of sorts, felt so bad," Marbut said during his weekly teleconference. "Tight, nervous, all these weird feelings that you just don't have during a game because you're out there doing your thing."

We also noted last week that Marbut could be coaching for his job through this final stretch of games, but the situation might not be as dire as it seemed. Cougfan.com had reported that Marbut was in the last year of a three-year rollover contract, but it turns out that's incorrect. According to WSU spokesperson Craig Lawson, Marbut actually has at least one year left on his deal after this one -- he actually has been rolled over twice since signing his deal, once after the first year (2011) and once after last season.

Why would Moos have rolled over Marbut after his worst Pac-12 finish? One idea is that it's to keep the coach from the kind of lame duck season that kills recruiting. If that's the case, it wouldn't necessarily prevent Moos from making a change. However, we don't really know how often Moos does or does not let these rollover contracts -- which are his favorite way to set up deals -- get to lame-duck status. At this point, it would be pure speculation on our part.

What we do know is that WSU -- which is only one game out of ninth place at this point -- is a rough finish to the year away from being right back near the bottom of the conference. And that can't be good. 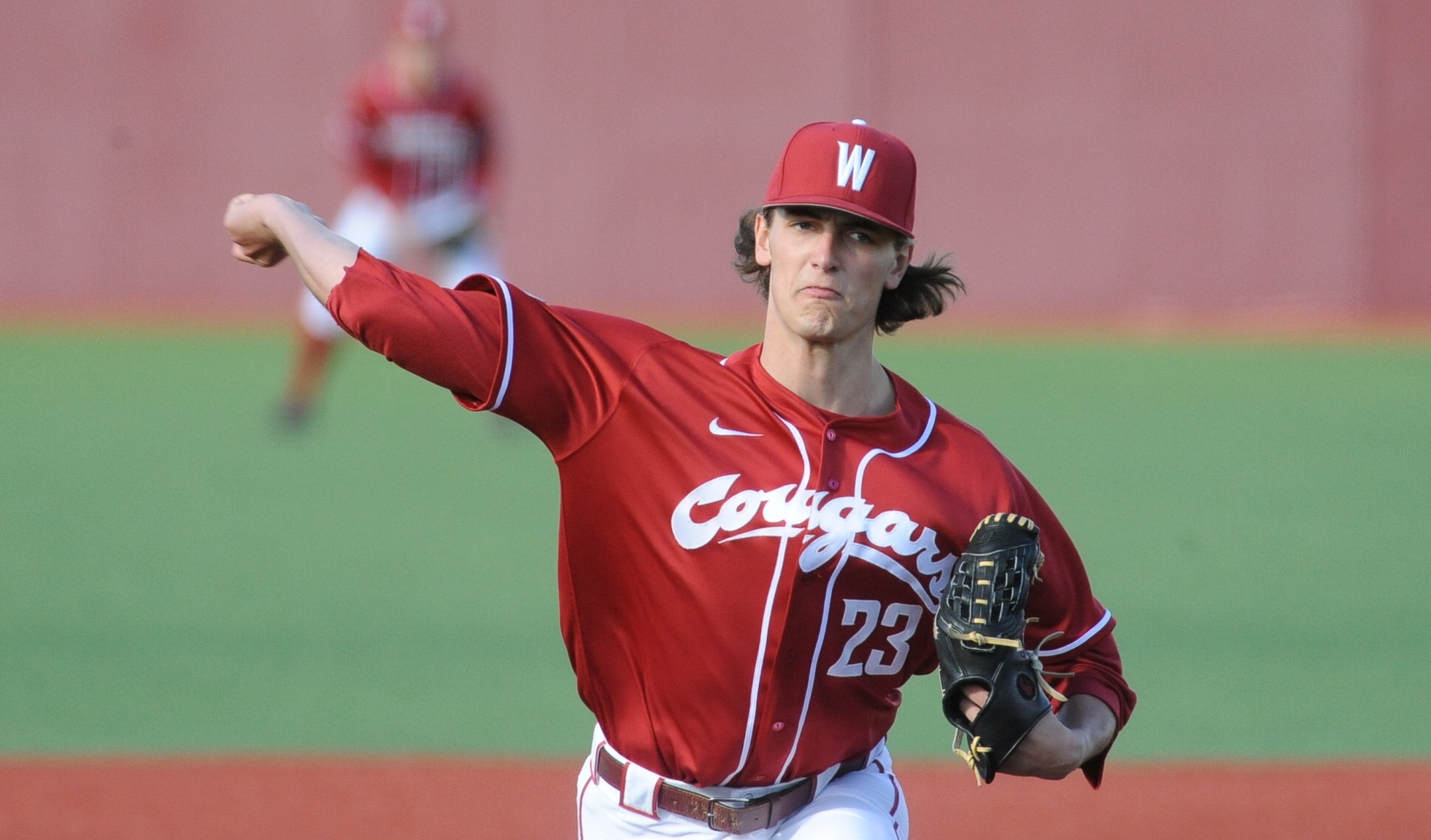 We highlighted Kellen Camus last week, so we're going to pass him over this week despite his 4 2/3 inning of two-hit, zero-run relief that was critical. Instead, let's go with Tanner Chleborad, whom I don't believe we've featured in this space this year.

Chleborad was outstanding in game one of the double header, pitching into the eighth while giving up just two runs (7 1/3 IP, 6 H, 2 R, 3 K), only one earned thanks to an error, sacrifice and single in the fifth inning. He hasn't had a great season overall, but holding one of the conference's best offenses down for as long as he did was awesome.

On a weekend where the offense struggled to score runs, it's not real easy to pick out an impact bat. We're going to reach back into last week and select Collin Slaybaugh again -- for a couple of reasons.

Second, Slaybaugh was named this week to the 2014 Capital One All-Academic District 8 Baseball Team, the third straight year he's been honored as such. He carries a 4.00 GPA as a kinesiology major, which I think we all can agree is pretty darned impressive! He was a first team academic all-American last year, and this award makes him eligible to make that first team again.

USC comes to town for a three-game series starting tonight at 6 p.m. before continuing with a 2 p.m. start on Saturday and a noon start on Sunday at Bailey-Brayton Field.

While the Cougars' postseason chances are all but dead barring a miracle undefeated run to the end of the year (and that might not even be enough, honestly), the Trojans are on the brink of their first postseason appearance in nearly a decade. It's been a long climb back up for a program that won 11 national championships under legendary coach Rod Dedeaux. USC currently sits at 24-18 and 12-9 in Pac-12 play.

A lost series in Pullman would not help the Trojans, for sure.

Statistically, USC looks an awful lot like WSU. The Trojans sport a middling offense that hovers right around the middle of the conference in most categories as the Cougars do. Their pitching staff has been a bit better, especially in terms of strikeouts -- the Cougars allow a lot of balls in play to a questionable defense which has resulted in a high batting average against.

The Trojans' most prolific hitter is Jake Hernandez, who is hitting a robust .371. However, he has just six extra base hits -- all doubles -- with four walks. He strikes out just once every 18 at bats. Which, as Craig pointed out to me, basically makes him a college clone of this guy.

All three games will be streamed by WSU.