WSU vs. Gonzaga: Breaking down a last-second loss

What happened on the last two plays, when DaVonte Lacy and Kevin Pangos traded buckets to end the game? We go back and throw the final sequence under the microscope.

Share All sharing options for: WSU vs. Gonzaga: Breaking down a last-second loss

Even though WSU didn't come out on top in its effort to upset the No. 10 team in the country, the two-point loss to Gonzaga produced one of the more memorable Cougar basketball games in some time thanks to a furious finish that featured a pair of layups in the last 10 seconds.

Gonzaga fans surely had to be wondering, "How in the world did Lacy get that open of a look?" And I know WSU fans were wondering the same thing about Pangos' shot.

So let's take a look.

With 14 seconds left in the game, Gary Bell Jr. makes the second of a pair of free throws (after missing the first). Junior Longrus takes the ball out of bounds, passing to Lacy. Not pictured below, and an important thing to note right away: Gonzaga had a pair of players on the lane to potentially rebound the free throw. This meant, as WSU pushed the pace, that the Zags were left to match up on their way down the floor.

As the ball comes in, you can see Bell eyeing Lacy, with Kelly Olynyk matching up with Brock Motum and Kevin Pangos matching up with Kevin Mike Ladd. Mike Hart is busting his tail down the floor; Elias Harris and Royce Woolridge are off the screen. It's unsurprising Bell -- generally considered the Zags' best man defender -- ended up on Lacy, who, with his hot hand, figured to be the primary perimeter option for the Cougs on their final possession. 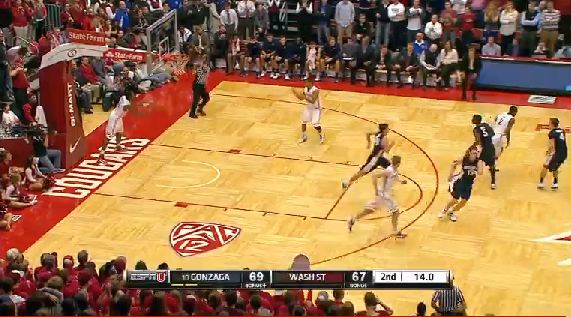 As Lacy approaches halfcourt, Bell picks up the pressure. Note how close Olynyk is to Motum and notice Pangos -- he's got his back to Lacy. Gonzaga is counting on the ability of its best defender to contain a guy who -- despite his performance to that point -- had missed the prior four games with a bad knee and had already logged heavy minutes. 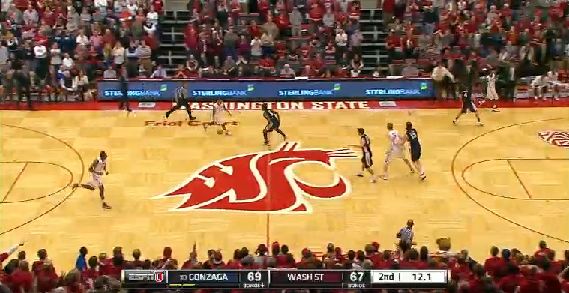 Obviously, he couldn't. And Gonzaga's defensive alignment, illustrated in the next picture, shows why this was such a problem for the Bulldogs. 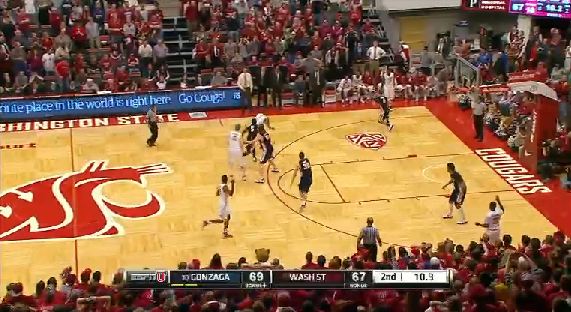 As Lacy turns the corner on Bell, there is literally nobody around the basket. WSU has spread the floor with Ladd and Woolridge heading to the corners, and while we'll never know for sure what Ken Bone had planned*, one thing is obvious: Gonzaga was expecting a three-point try.

*Based on looking at A) Motom's posture and positioning and B) the spacing of the other two players (Longrus is a non-factor who was trailing in case Lacy needed to be bailed out), I'm guessing WSU had planned a high ball screen from Motum, likely with a pick and roll. I suppose pick and pop is an option, too, with Lacy driving and looking for either a layup or kickout. Either way, there was almost certainly a ball screen involved that became completely moot when Lacy embarrassed Bell.

Like many great plays, this was a combination of talent and good fortune. If Harris is in the short corner instead of Pangos, maybe he can bother the drive with his length. If Pangos isn't staring at Ladd, he's probably not a whole step late. If Mike Hart is using his brain at all, he's not even remotely worried about Longrus trailing the play at the three-point line and instead is able to rotate over to stop the ball.

Because all three of those things happened, Lacy's superlative individual effort -- which really should have been thwarted -- resulted in this.

Of course, that wasn't the end of it, as Gonzaga benefited from the same combination of great individual effort/good fortune as the Cougs.

As we prepare to look at at what happened to the Cougs' defense on the ensuing possession, one thing I want to stress is that I don't do this to blame anyone for what happened. That's the first thing fans always want to know is, "Who's fault was it?" As you'll see, there are a couple of critical errors that lead to Pangos' game winner. But sometimes it's OK to say, Hey, everyone did their best, and their best was a bit better than our best. I think that applies here.

After the make, WSU's strategy should have been to retreat as quickly as possible. But without the benefit of a timeout, some of the Cougs mistakenly pick up 90-foot pressure. 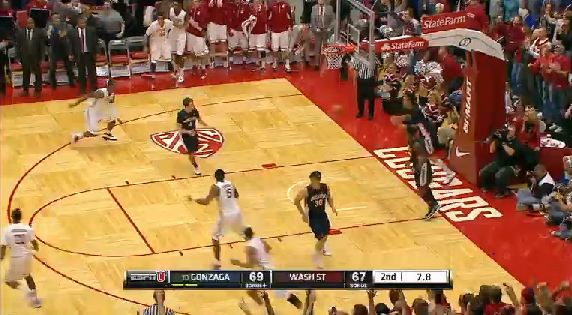 We can speculate all day as to why, but the most plausible explanation is that they had been scrambling to get back into the game and forced to foul on the two previous possessions. So, they stayed in that mode, even thought the situation didn't call for it. That's the first bit of good luck for the Zags; the second is Ladd's indecision -- not seen here is that Ladd started down court before coming back ... just enough to get himself slightly out of position in trying to stop Pangos, who already has a half head of steam.

Ladd actually does recover a bit, but as he presumably is trying to avoid a foul, Pangos turns the corner fairly easily. The interesting thing is that even as Ladd is getting beaten down the floor, WSU actually is in reasonably decent position to contain Pangos, with three guys back. 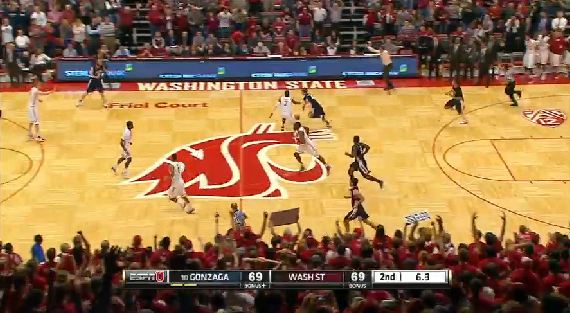 But because Ladd is beaten, it's on either Motum or Woolridge to stop the ball. Motum decides not to fully commit to Pangos. It's an understandable decision, given that A) his man, Olynyk had hit a three just minutes before, and B) Woolridge's man isn't a threat yet. Just one problem: Woolridge is indecisive. 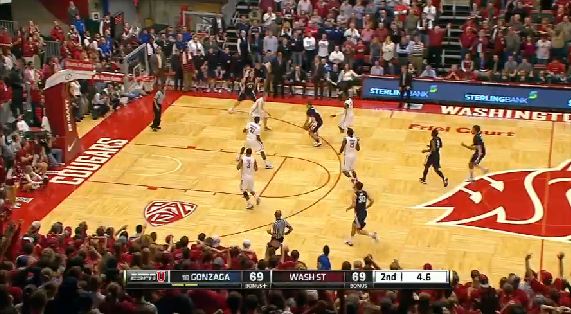 Woolridge keeps backpedaling, and as he does, he sneaks a peek at Bell -- a 43 percent three-point shooter -- then looks at Olynyk, perhaps because he was thinking Motum was going to step out on Pangos and he'd need to rotate to Motum's man. Instead, Motum plays it 50/50, and by the time Woolridge realizes it, it's too late -- he's too deep, and his challenge of Pangos is weak. (Although, after rewatching it a few times, Pangos gets a lot of credit for hitting a shot that was more difficult than it appeared in real time. Charging into the lane with a full head of steam, taking off one footed 10 feet or so from the basket? Yeah, tough shot.)

Still, there were 2.2 seconds remaining. Unfortunately for WSU, Longrus -- a freshman -- takes the ball out and hurries the inbounds pass to Lacy, resulting in a no-chance desperation heave. But look at the GIF one more time, watching Motum. Then watch this, again picking up Motum after Pangos' make:

Had WSU had the benefit of one more timeout, might this have not happened? I feel pretty confident in saying it wouldn't have happened like this. But who knows what Mark Few draws up? Maybe the Cougs get beat anyway. Sometimes, rather than looking for someone to blame by criticizing the players, coaches or officials, it's really OK to just sit back and admire a pair of great plays and revel in the awesomeness that is college basketball. Sometimes, you just need to tip your cap.

That seems to be appropriate here, because without spectacular efforts from both Lacy and Pangos, the breakdowns just don't matter.